Where the Climate Change Battle is Located, The Most Translated Books & China’s Big, Crazy Week

Someone we know who lives in New Orleans posted on Facebook just before Ida crashed into the city a photo of themselves with their provisions as they prepared to ride out the storm. We would have stocked up more po-boys and beer but they looked pretty well supplied nonetheless. As the front edge of the hurricane hit, they alerted everyone that their power was out. After the storm, they posted they were okay, but their condo was hot and they did not know when they would have power.

New Orleans weathered Ida better than it did Katrina. The levees held. But the 911 system, which was supposed to be upgraded after Katrina, failed. For most, the power has been out since the hurricane with little insight on when it will be restored. The drainage system is suspect. In other words, we have more evidence of lack of state capacity in America, something we have been pointing out and worrying about for some time. One of the charms of New Orleans is how laid back it is. On one of our many trips there, a local, who had moved away for a number of years, told us he came back to New Orleans because they don’t know how to relax elsewhere. We agree, and it is true, though we don’t want all of America to be as relaxed as New Orleans.

In some ways, we view New Orleans as The Stranger did The Dude in The Big Lebowski: “It’s good knowin’ he’s out there. The Dude. Takin’ ‘er easy for all us sinners.” We miss the city that care forgot, problems and all, having not been there since just before the pandemic. Do you know what it means to miss New Orleans? We don’t miss where the climate battle will take place, what are the most translated books and the continued worrying actions by Xi Jinping. It’s this week’s International Need to Know, saying goodbye to the dog days of August and welcoming the cat nights of September with international information and data.

Asia is Where the Climate Change War will be Fought

Last week we noted hope in climate change data. This week, we combine hope with the challenges. Recently, environmental think tank, Ember, came out with their half-yearly analysis of global electricity generation and sources for that generation. The good news is that solar and wind now combine for 10 percent of global electricity generation. A decade ago many would have been skeptical that could happen. We’re confident that percentage will continue to increase rapidly over the next decade. The challenge is that electricity demand has also increased. That means that emissions for the first half of 2021 are 5 percent above pre-pandemic levels of the first half of 2019. One country, China, is the main reason for the increase in electricity demand, with China accounting for 90 percent of world electricity demand increases in the last two years. China rapidly increased solar and wind energy generation but demand was so great that coal use increased too. In fact, China’s increased coal generation of 337TWh is more than the EU’s total coal generation in the first half of 2021. The key to fighting climate change lies in Asia and the developing world. Just think what happens if India gets its economy growing again but does not continue to increase clean energy generation. The U.S. and other countries can help with new technology development and policies that ease the commercialization of such technology but the fate of climate change will be in the energized hands of China, India, Indonesia and other emerging and developing countries. 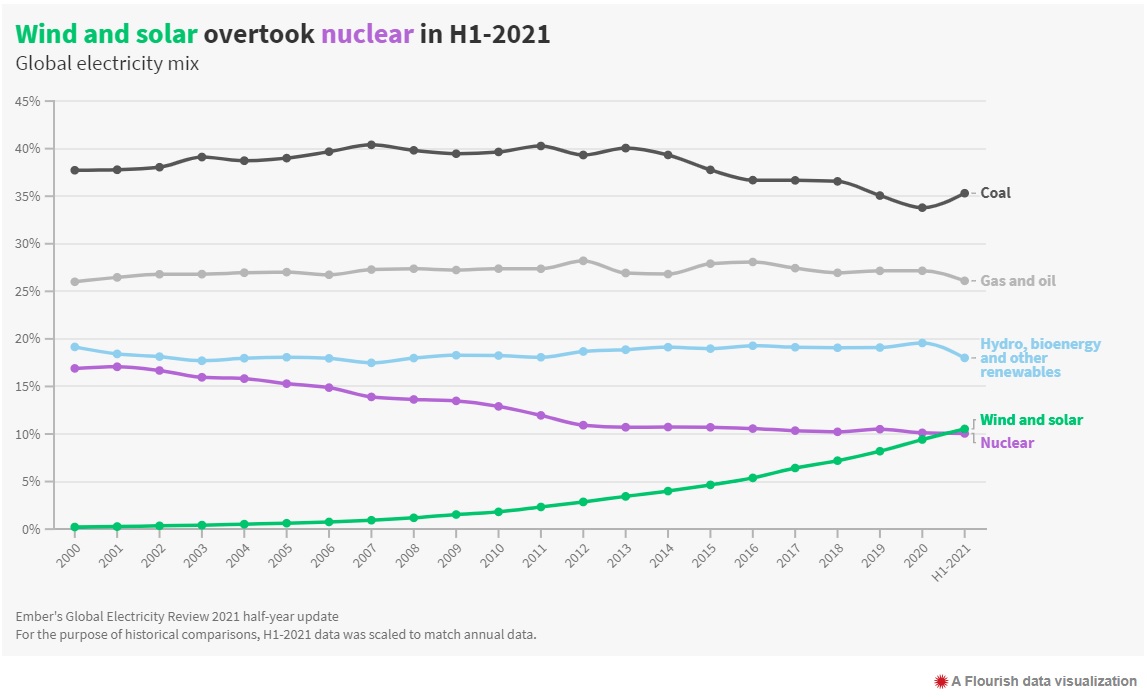 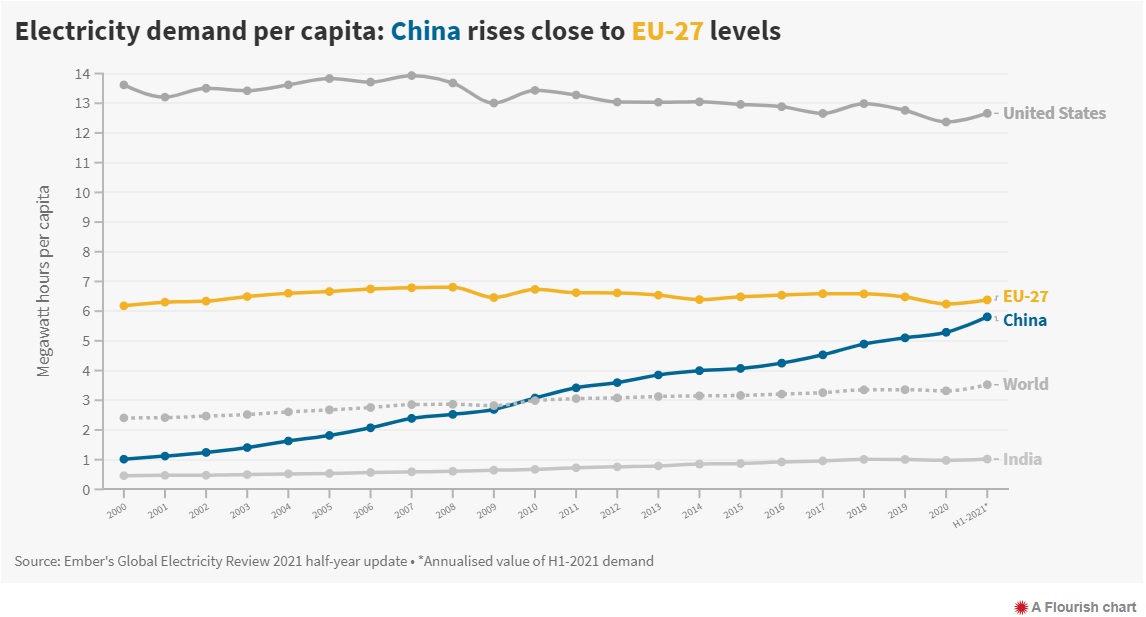 The Most Translated Books

As we ease out of summer into the post Labor Day hurry up, how did your summer reading go? We assume you have read Challenging China and are ready to post a five-star review on Amazon. Among other books, we read The Constitution of Knowledge, The Long Game and the novelization of Once Upon a Time in Hollywood. But what are each countries most translated book? The tutoring company, Preply, of all places, provides the answer. Some are easy to guess such as Pippi Longstocking being Sweden’s most translated book (70+ languages) or Denmark’s Andersen’s Fairy Tales (160+ languages—Pippi is but a piker in comparison). Others we would not have guessed such as China’s The True Story of Ah Q (gesundheit). Most surprising to us, until we stopped to think about the circumstances that led to it, is that the most translated book from the United States is The Way to Happiness (112+ languages) by L. Ron Hubbard. Yes, the Scientologists work hard to proselytize. We are also surprised that instead of the Lord of the Rings that Alice in Wonderland (175+ languages) is the most translated book out of England. We are also greatly confused by why The Hobbit is listed as South Africa’s most translated book. In the meantime, we await our book to be translated into simplified Chinese. 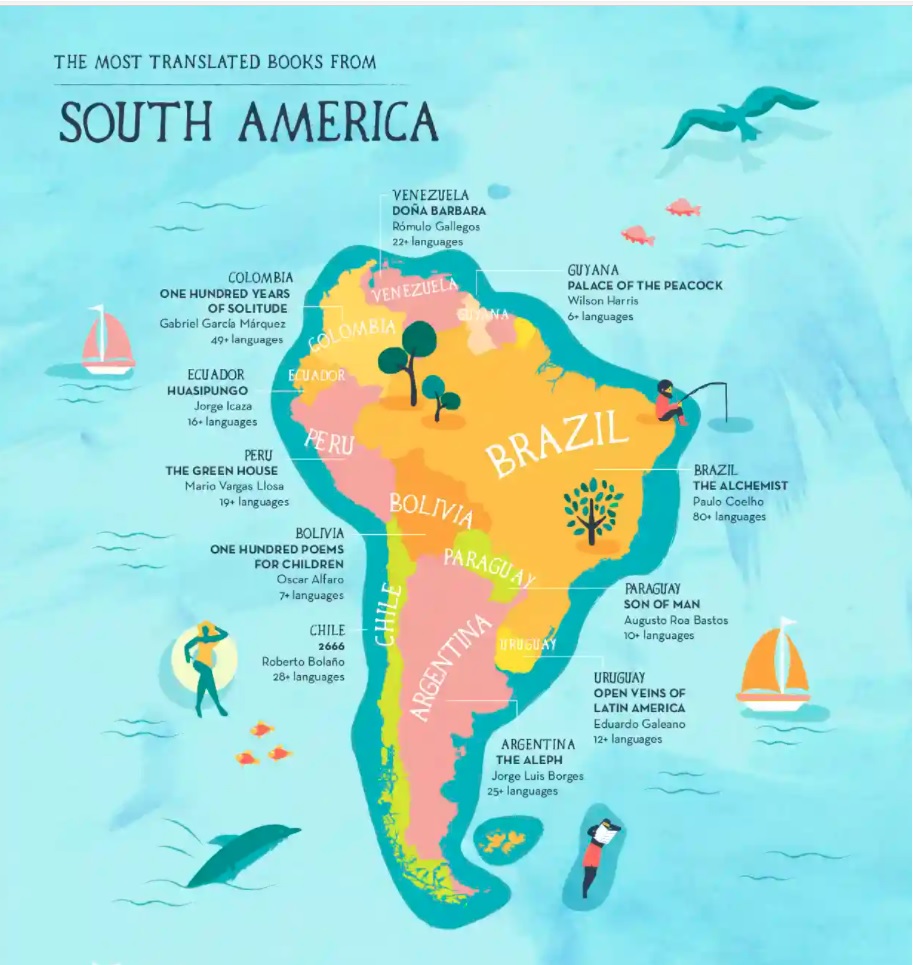 China has such a busy week we are calling on someone to spike Xi Jinping’s drink with Ritalin. In the last seven days, we have seen China:

And that’s just the tip of the rambunctious China government ice berg floating in ever more choppy geo-economic waters. Perhaps the most telling event in China this week, however, was official media reprinting a Wechat blog post that accused the U.S. of waging warfare against China and calls Xi’s regulations crackdown a “profound revolution.” Since it was reprinted in the People’s Daily, Xinhua News and elsewhere, the post apparently has official approval of the government. Here’s one of the worrisome passages.  (emphasis below mine):

The United States is implementing increasingly severe military threats, economic and technological blockades, financial strikes, and political and diplomatic encirclement against China, and is waging biological warfare, cyber warfare, public opinion warfare, and space warfare against China, with increasing efforts to launch a color revolution against China through the fifth column within China. If at this time we still rely on the big capitalists as the main force against imperialism and hegemony, and still cater to the U.S. “tittytainment strategy 奶头乐战略”, and let our young generation lose their toughness and virility, then we will fall first without our friends, just like the Soviet Union did back then, letting the country collapse, letting the country’s wealth be looted, and letting the people fall into a deep disaster. Therefore, the profound changes that are currently taking place in China are precisely to deal with the current severe and complex international situation, and precisely to deal with the savage and ferocious attacks that the United States has begun to launch against China.

Each of us can feel that a profound social change has begun, not only in the capital circle, but also in the entertainment circle, It is necessary not only to destroy the decadent forces but also to scrape the bones and heal the wounds. It is also necessary to clean the house, freshen the air, make our society healthier, so that the main body of society can feel happy

Granting we wish we’d come up with the term, 奶头乐战略”, pass the Ritalin, we’re all going to need it in the coming years as China relentlessly works to reshape its country and the world.