Where the Middle Class are, Young Koreans and China, & China’s Growing and Shrinking Cities

We believe, although we are not sure, because it was so long ago and we have seen them perform so often, that we first saw the Hot 8 Brass Band blow horns live just after midnight in a space not much larger than a typical American living room in the Den at the Howling Wolf in New Orleans, Louisiana. During the set, we were in the front, where it was difficult to discern where the band and audience stopped and started. More than once the slide of the trombone nearly hit us as we danced with our wife. It was a singular experience. A New Orleans experience.

Of course, the foundation of the sound was the large sousaphone player, Bennie Pete, who co-founded the band when he was a teenager. We have since seen the Hot 8 countless times, in other venues in New Orleans, including at French Quarter Festival, at the Crocodile in Seattle and many other places. Every time they urged us to “Move Your Body” or pleaded  to “Let Me Do My Thing” or cried “Love Will Tear Us Apart” in their cover of the Joy Division song, we moved, we did and we sympathized. We will undoubtedly, whenever this pandemic ends, see the Hot 8 again, but it will now be without Bennie Pete, who succumbed to a combination of sarcoidosis and Covid earlier this week at the tender age of 45, leaving behind a wife and three young children.. Long a staple of funerals and second lines in New Orleans, there will undoubtedly be a large, emotional one for Bennie Pete.

On top of the death of Michael K. Williams, who played Omar on The Wire, September is off to a sad start. RIP to those two who gave us such joy and introspection over the years. As we mourn while whistling the Farmer in the Dell, we target young South Koreans’ views of Chinese, steal a stash of where the middle class are and lay a beat for the future of China’s tech economy. It’s this week’s International Need to Know, like the Hot 8, keeping international information and data funky.

After we wrote this, we learned of the passing of Warren Storm, a pioneer in Swamp Pop. Check out his moving cover of As Long as I Can See the Light. Tough, tough September. RIP

Where the Middle Class Customers Grow

For a different project, we have been doing some research on where the middle class roam with their expendable cash, credit cards and cryptocurrency. Last week, World Data Lab released their list of the largest consumer markets. The top three—China, India and the U.S.—are no surprise. Nor are we surprised by their data that shows Asia now accounts for 55 percent of the “consumer class” although only 41 percent of world consumer class spending. “Consumer class” as defined by World Data Lab is “anyone living in a household spending at least $11 per day.” What did you spend your eleven bucks on today? A latte? Socks? A bag of grain? This threshold perhaps explains why Egypt is number eight on World Data Lab’s list, placing it above countries such as Germany, France and the U.K. Egypt, has a lot of people, it has the 14th largest population in the world. And so, they have a larger number of people spending at least $11 per day. But, of course, compared to some of these European countries, they are spending much less overall. In fact, Egypt is 128th in terms of GDP per capita. The World Data Lab gets the overall picture right in terms of how important Asia is, but we wonder if it confuses as much as it clarifies in some of the details. Egypt is not a larger market for most consumer items than is Germany, for example. For basic staple items, however, perhaps it is. We must research further for this other project. 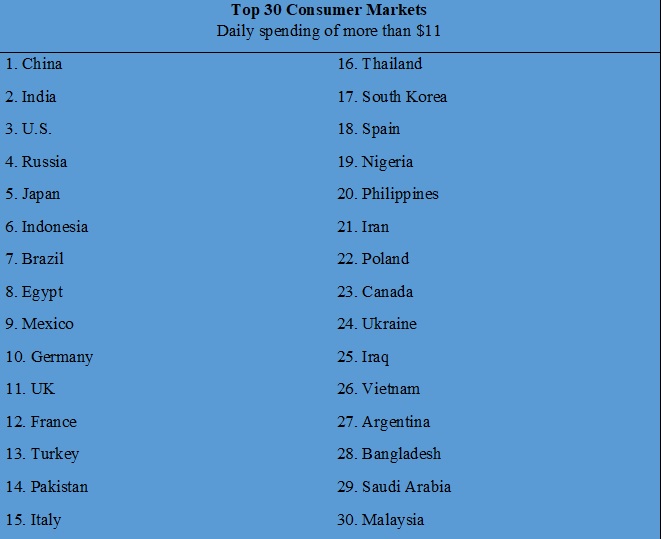 You may have seen the New York Times article last month about a survey which showed negative views of China have increased tremendously among South Koreans. Nearly 60 percent of South Korean respondents in the survey called China “close to evil.” We believe the technical term is evil adjacent but nonetheless the survey was startling in that it showed China had replaced Japan as Korea’s biggest worry, especially among South Koreans under the age of 30. South Koreans, like people everywhere, should eye China’s government warily. But, just as in the U.S. worries of China occasionally spill over into prejudice against Chinese, so to is the case in South Korea. Professor Cho Mun-Young at Yonsei University recently described a presentation by a graduate student who examined anti-Chinese prejudice. In looking at posts and comments online, he found, “There were numerous posts about bullying Chinese as a form of recreation.” No real data was included as part of the presentation only anecdotes so we hope like in most places online, the abuse is being spouted by a small minority of people. Nonetheless, we also hope that people in countries like South Korea and others who work to push back against China’s increasing authoritarianism and expansionism will distinguish between China’s government and the Chinese people themselves. 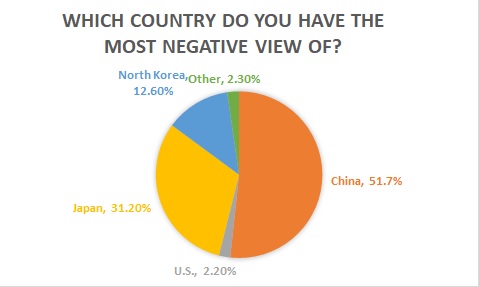 In Challenging China, we go into fun loving detail about China’s aging demographic challenges. The excellent Marco Polo website asserts “…”by disaggregating the headline data and examining city-level development, the census actually reflects a more complex story of demographic trends over the last decade.” The essence of Marco Polo’s argument is that even as the number of working age Chinese decreased, there are cities in which the number of working age Chinese have increased due to migration from other cities. But, there are more cities, according to Marco Polo’s data, that have decreased than increased “Since 2010, just 85 out of 363 cities…have been growth cities.” In growth cities, economic growth might continue to be robust. This is an important detail but we don’t think it changes the larger challenge for China. Overall GDP growth will be lower in the coming years (not just because of aging demographics but it is certainly an important factor). The Chinese Communist Party has maintained a pact wherein if life continues to improve for the people, then the CCP can continue to rule.* But, will life continue to get better without strong GDP growth? It’s possible GDP per capita could continue to increase as it did in Japan during the so-called “lost decades,” in which case for many Chinese life might indeed continue to get better even if overall GDP increases are low (though will they be able to play video games?). But that’s not guaranteed and it will be challenging to pull off. No matter how you dice the demographic data, it is a headwind for China’s economy. The haves in the growing cities will have to contend with the have-nots in the more numerous other cities, not to mention with the rural areas. 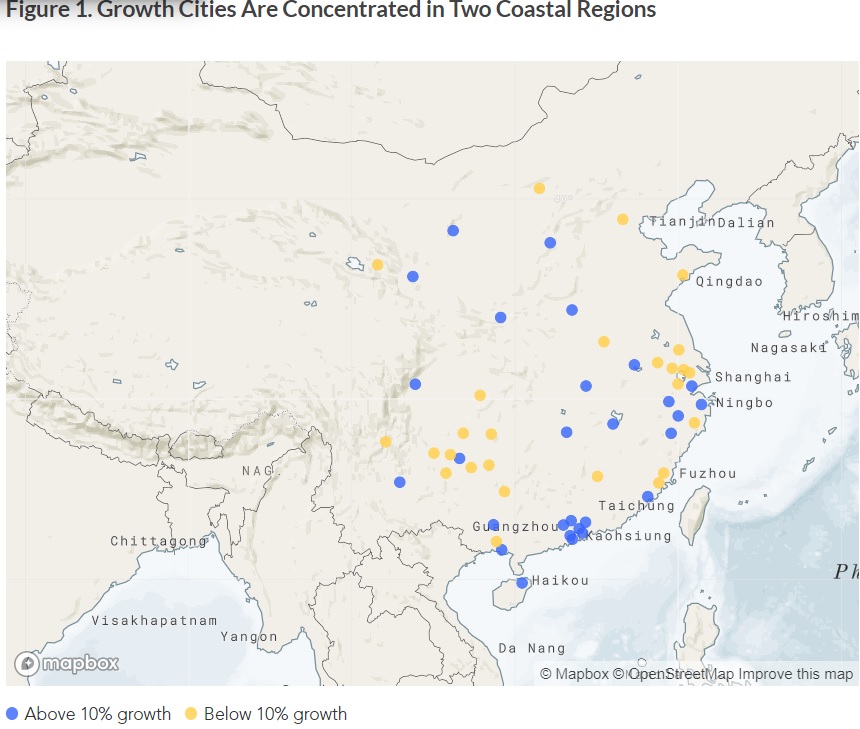 *Of course, if life stops improving for the Chinese people, the CCP will not cede power. Strange pact that.

Where the Climate Change Battle is Located, The Most Translated Books &... Measuring Governments, Inflation Rates and Is This China’s Japan Mome...
Scroll to top