Covid is Complicated But Get Vaccinated, Where the Conflicts are, and H&M for Sale

Earlier this week we had the honor of speaking to some US Department of Commerce staff about China, including a couple of deputy assistant secretaries. The theme of our talk was that the U.S. and China are in a “Competition of Competence.” We pointed out the many and varied ways America is incompetent, and some of our areas of great competence, too. We also pointed out China’s problem areas and strengths. The first question in the Q&A was from an economist who strongly believed in China’s infallible economic competence. It was a great illustration of the competition we are in, and some of the myths we fall prey to, including unwavering belief in official China government data.

But we say we were honored to be asked to speak to Commerce staff because over the years we have received so much help from them and been so impressed by Commerce staff when we have worked with them in various international markets. During our talk, we noted that if Commerce staff were NBA or MLB players we would judge them underrated with a high Wins Above Replacement level (WAR). We are very much into determining numerical values for items of interest and importance. So much so that we are embarking on a project that is not yet ready for presentation but we hope will be before the end of the year. We have received good advice and help on it from both a banker and a data expert, both of whom also have high WAR values. As you stay tuned for more on this project, we explain the complications of Covid, where the wars (not WAR) are, and the economic consequences to H&M’s speaking out on forced labor. It’s this week’s International Need to Know, listening to Jazz Festing in Place even as you read about international information and data.

Covid is Complicated but Get Vaccinated

We apologize in advance for the number of charts below but millions of Americans force us to do so (you know who you are). Covid-19 is very complicated and there is much we still don’t understand about the virus, from why certain countries have had so few deaths from it, to how long immunity lasts, to how it originated, to a myriad of other questions. If one looks at the first two charts showing a variety of countries’ vaccination rates and deaths, one does not see obvious correlations. That’s partly because in African countries and certain other parts of the world there have been remarkably few deaths throughout the pandemic. But in countries where deaths have been high throughout the pandemic, we see a pretty stark correlation between daily deaths and rate of vaccinations. First, in Portugal, once they vaccinated more than 80 percent of their population (98% of their eligible population), deaths fell precipitously and Portuguese happily sip port in an unlocked down society. We see the same thing for Spain, though perhaps they are drinking sangria instead of port. Americans who want to end lockdowns, mask mandates and other restrictions have an obvious choice to make. 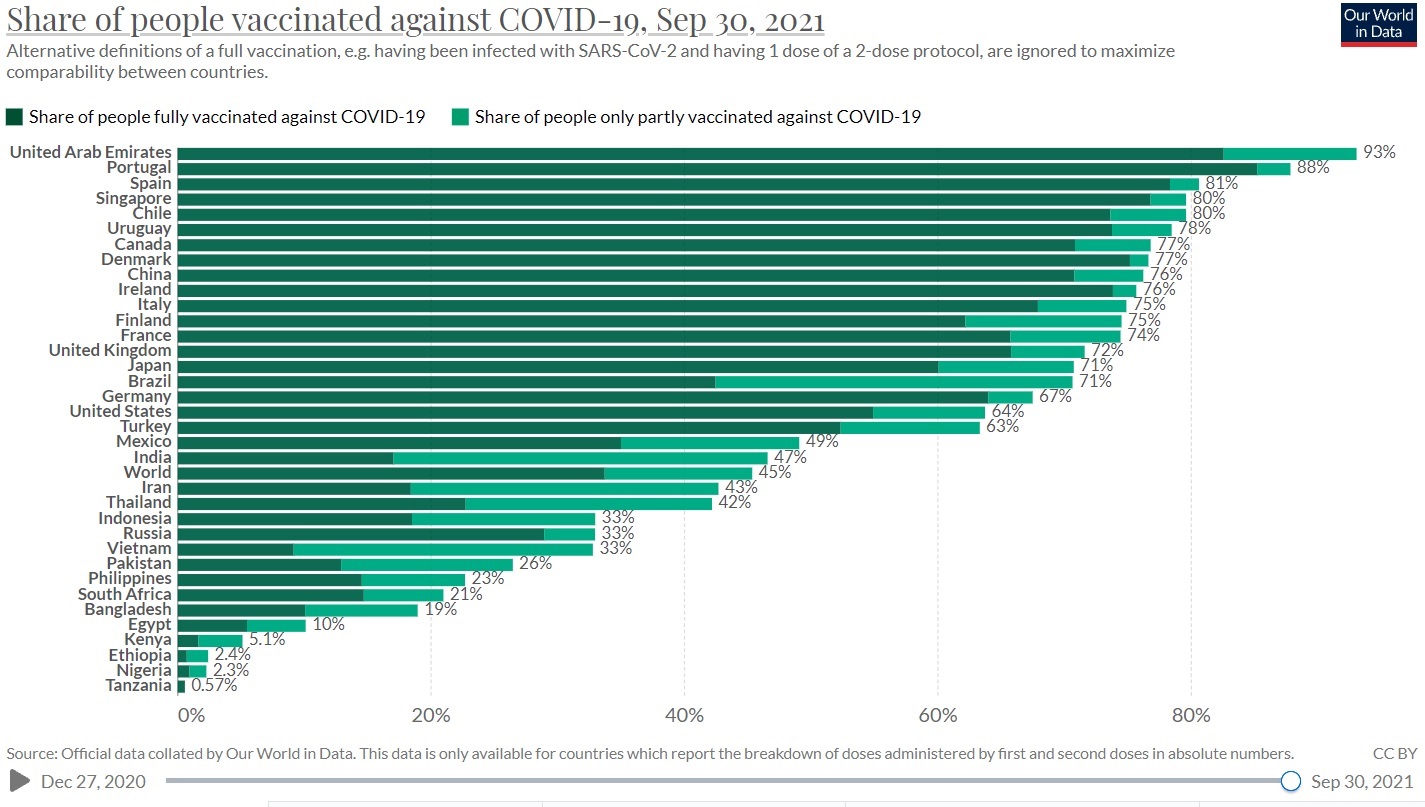 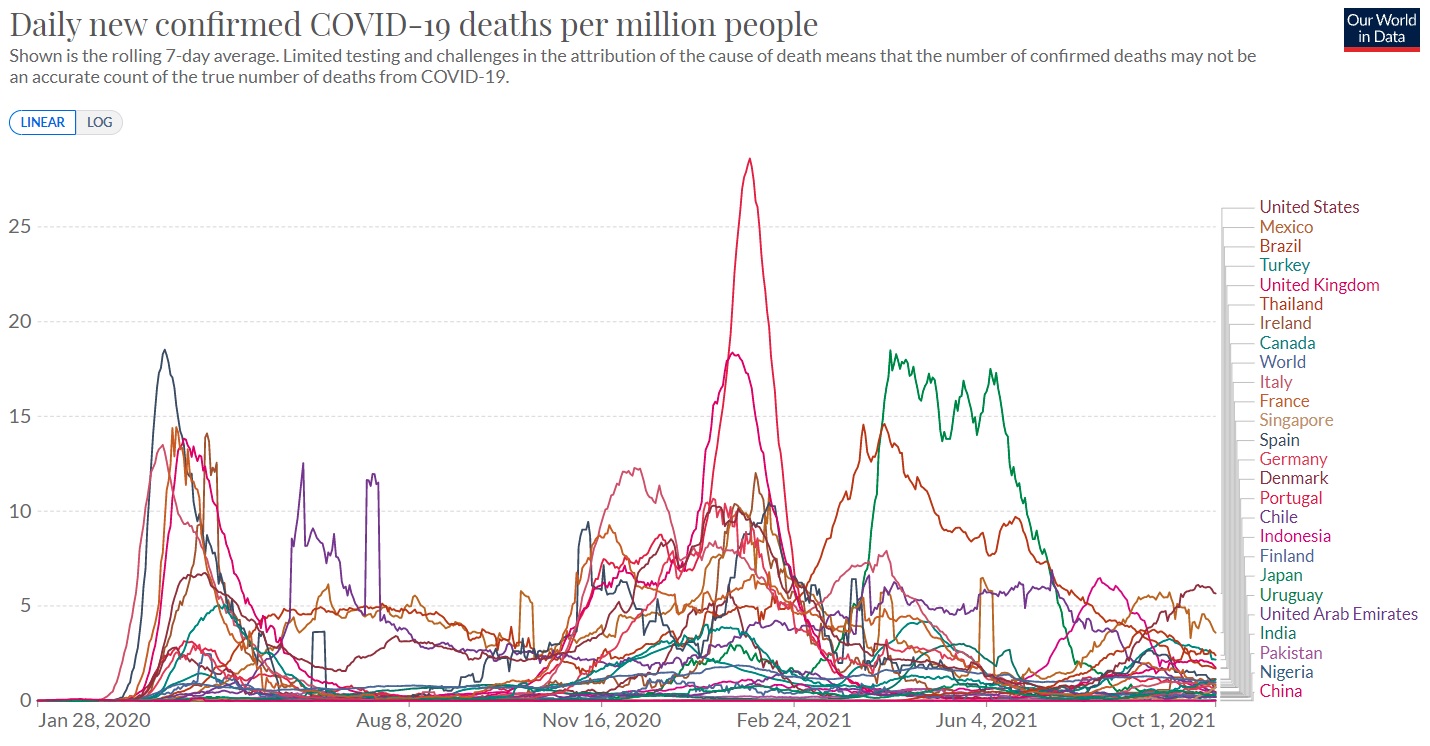 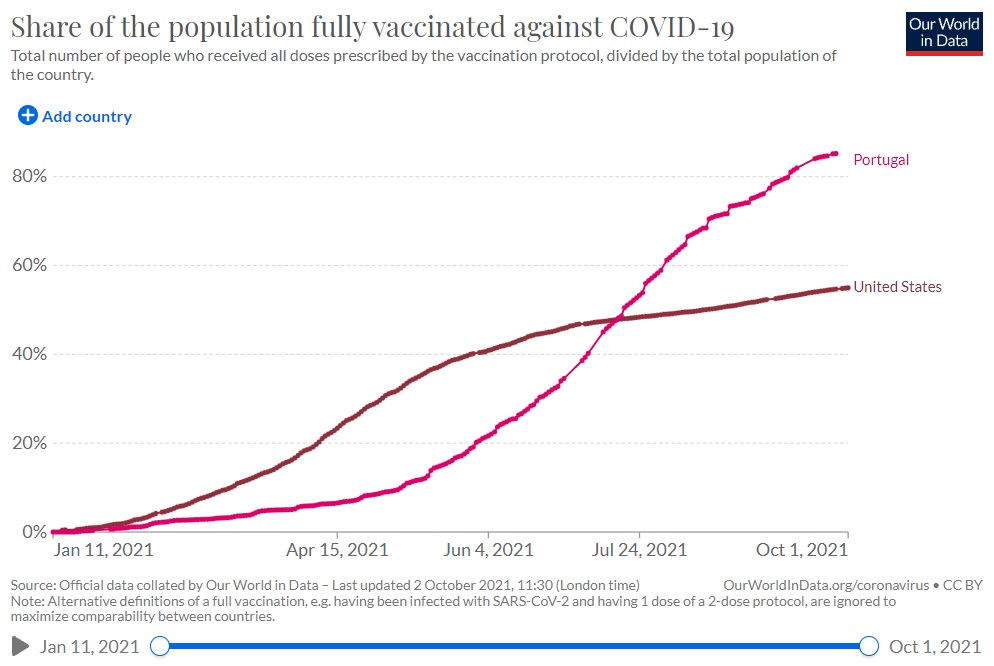 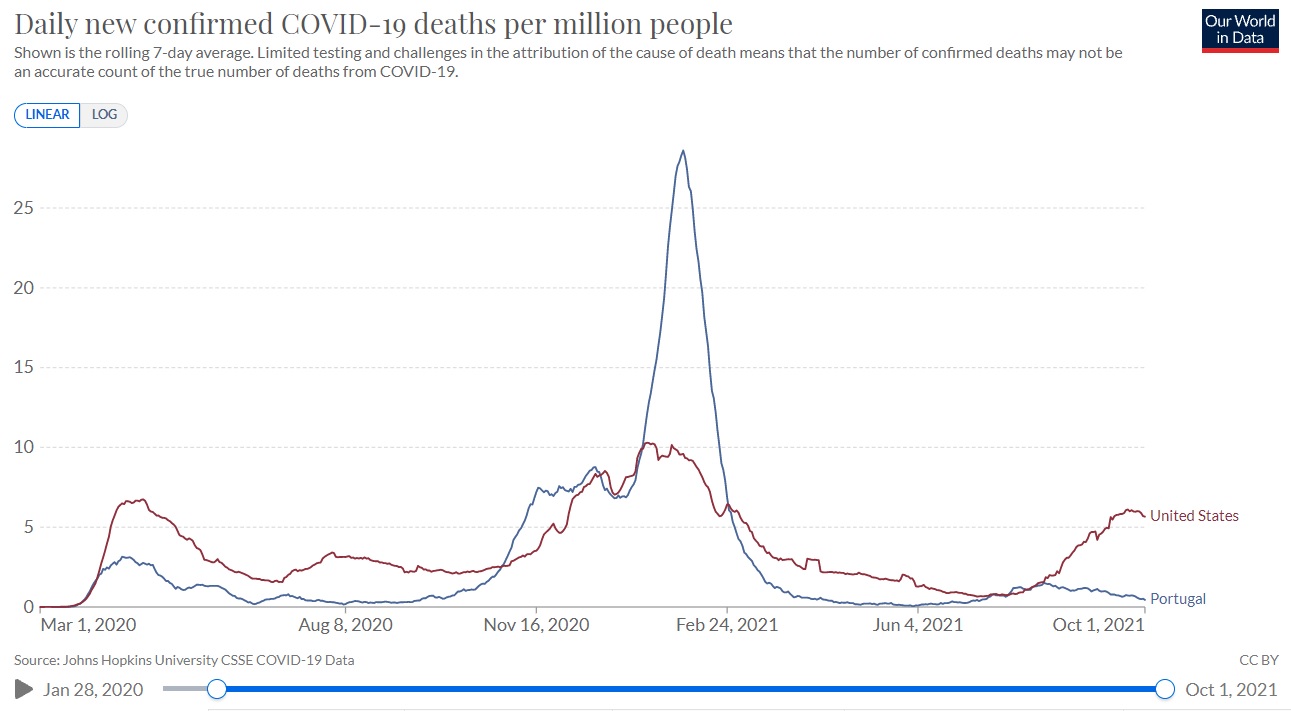 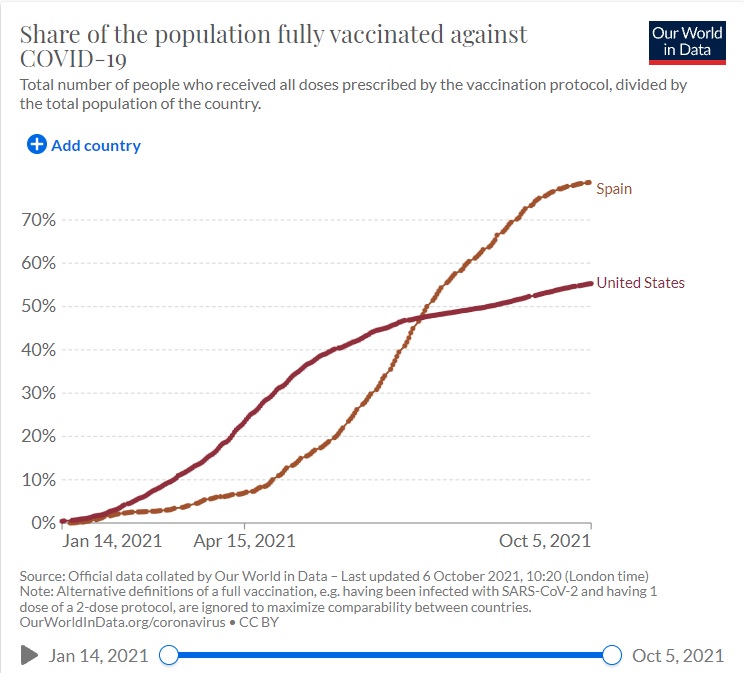 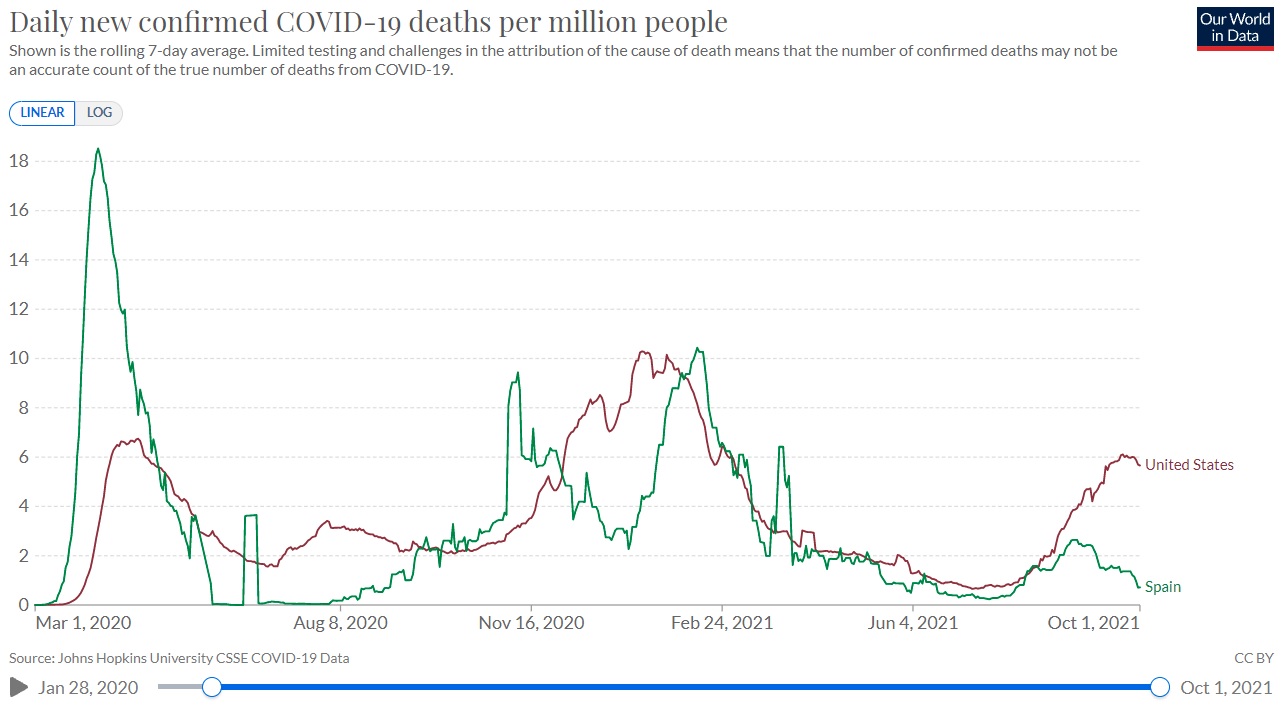 There is much debate about whether the world is becoming more peaceful or not. Some assert that we are, others claim there is no sign of a more peaceful world when measured correctly. We say we give the two sides revolvers and let them resolve the issue on the battlefield. But, we were curious recently by the current state of wars, battles and conflicts. The Council on Foreign Relations Global Conflict Tracker keeps tabs on conflicts around the world of importance to the U.S. which seems a bit narrow minded but we present their map below nonetheless (If a human falls in the woods dead of a gunshot and America does not care, did they make a sound falling?). As you can see, there are 27 such conflicts, most of which are in Africa and Asia. Five of these conflicts, according to CFR, are worsening, including those in Ethiopia, Yemen and Myanmar. The rest are unchanging and none, alas, are improving. The Armed Conflict Location & Event Data Project takes a broader view, tracking battles, riots, explosions and violence against civilians whether America’s foreign policy establishment cares a whit about those lives or not. There were 6,798 such events over the last month (!) with 7,286 fatalities. The good news is that there has been a decrease in events and fatalities over the last year. Canada, Australia, Japan and Western Sahara have had no conflicts in the last year which makes us wonder if the researchers have ever been to a hockey match. 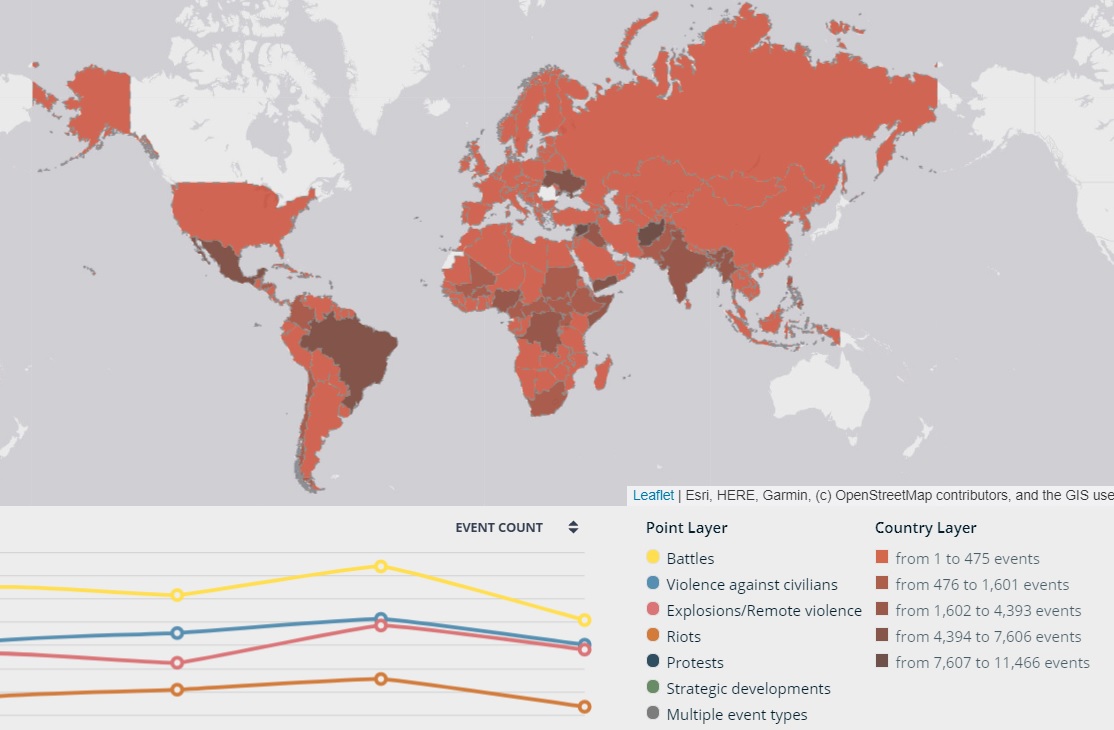 You may recall last spring that the Swedish retailer H&M ran into trouble in China after posting a statement on its website that they would not use cotton made from forced labor. Credible reporting has shown that cotton is made by Uyghurs through slave labor in Xinjiang. After discovery of the statement on H&M’s website, China immediately ceased such practices…er, no, actually H&M was removed from map apps in China so customers could not find their stores easily, ecommerce sites removed them from their platforms and Chinese celebrities called for boycotts of H&M. The company quickly took the statement off their website but what have been the economic ramifications for the twee hip retailer? Well, their latest quarterly report shows that “H&M’s sales in China were down 23% in the local currency for the second quarter of 2021, compared to the same time last year.” And China is no longer one of the top ten markets for H&M. So H&M took a hit from China’s using its economic leverage to be able to—we check calendar to make sure it’s the 21st Century—continue to use slave labor and torture and imprison people based on their religion and ethnicity. Companies are drawn to China’s large market but all succeed there at the strategic whims of China’s government. 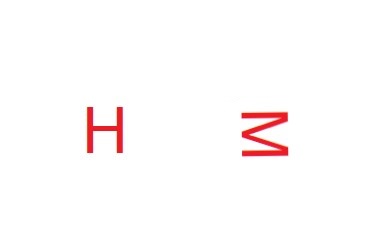 More Hope on Clean Energy, Where the Wealth Turns and Asking the Right China... Covid and Mental Health, Who Governs Best & How Market Oriented is Chi...
Scroll to top