Change Coming, Manufactured Outrage, and is Xi a Cat?

We hesitate to write this since we know it may irk some/many of our readers, but we find the stories on Facebook by the consortium of journalists to be rather unpersuasive and hypocritical. Wait, lift your finger from the “angry”  reaction emoji and hear us out. When we saw the 60 Minutes story on Facebook featuring whistleblower Frances Haugen it was nearly devoid of data and the little data provided seemed to show Facebook had a negligible effect.

When doing some research on social media for our book, Challenging China, the studies showed that Facebook did not have the effect people think it does. We find ourselves mostly aligned with the views of the blogger Kevin Drum: Instagram is probably a net positive for teenage girls, Facebook did not influence the 2016 or 2020 elections much, and even internationally, where there might be more of a problem, very little convincing evidence has been provided thus far. Further, regarding the concern raised by the consortium of journalists that Facebook promotes “toxic content,” how is that different than what TV, newspapers and magazines do? After all, where does the term, “If it bleeds, it leads” come from?

Now all this does not mean we are a big fan of Facebook, we are not. We far preferred it in the early days before there was a newsfeed and algorithms promoting content one way or another. We liked keeping up with our friends and what their kids or pets were doing, what music they were listening to, and what TV shows and movies they were watching. Which leads us to wonder why someone hasn’t tried to start a social media platform based on a nonprofit model, perhaps funded as public radio and Wikipedia are, so that we could all hang out virtually without the profit motive driving interactions? As we post this week’s edition to Facebook and wait for friends to click on “angry”, we wonder if a change is coming, look at similarities in manufacturing employment and reveal the real reason China cracked down on consumer tech. It’s this week’s International Need to Know, the evergreen tree of international information and data, not losing our leaves even as autumn sets in.

We have  a post on Tuttle Publishing’s blog where we compare China and the U.S. to NBA star Kyrie Irving. Check it out.

A Change is Gonna Come?

The cauldron that is our world has especially toiled, troubled and bubbled over the last decade. The wayward sisters are hard at work, and the pandemic raises the heat even higher on countries around the globe. The people are disconent. Pew Global reported last week on the views of citizens in advanced countries regarding their political and economic systems. Italy has the highest percentage of people saying “the political system needs to be completely reformed/needs major changes.” Spain and the United States are just behind Italians on this wish. New Zealand, by a considerable margin, has the fewest citizens believing political change is needed. Not coincidentally, Italy has the largest percentage of people wanting to reform their economic system, along with Spain and Greece (we continue to underrate the long-term effects of the Great Financial Crisis). After Greece, Americans most want to completely reform and make major changes to their health care system. Fondness for democracy has declined in many countries over the last decade. The decline is likely partly tied to perceived policy failures. Neither eye of newt or toe of frog is likely to fix it. 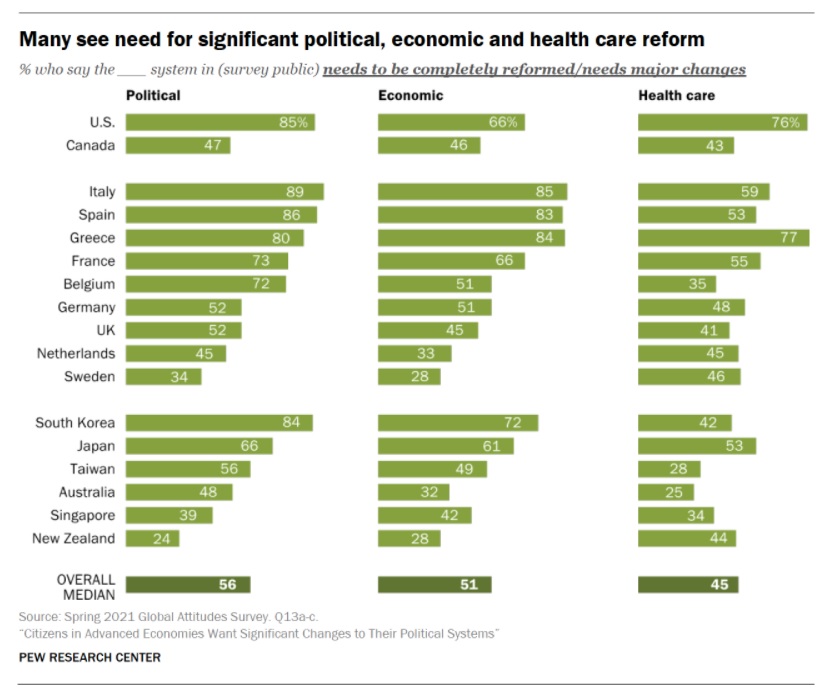 International trade continues to be blamed for all sorts of ills, including loss of manufacturing jobs in America. But, like many things that are accepted as common wisdom—such as Russell Westbrook is great at basketball—it’s not true. The number of manufacturing jobs in America has declined, but as we wrote in Challenging China, “If you graph the loss of manufacturing jobs in Germany, the U.K., France, and every other developed country, the slope of the rate of decrease in manufacturing jobs since 1970 is the same.” Now comes a new study providing more ammunition for our trade-is-unfairly-blamed guns. The Peterson Institute for International Economics compared North Rhine-Westphalia, a manufacturing region of the exports stalwart Germany, with what people think of as rust belt laggard, Ohio. It turns out that both North Rhine-Westphalia and Ohio’s manufacturing employment as a share of total employment have declined at the same rate. This is true of all countries as you can see in the second chart below. U.S. policy should be to re-enter the Transpacific Partnership (TPP) to deal with a more challenging China, but until the real story of trade sinks into people, this is unlikely to happen.

Addendum: Another study came out on Tuesday “On the Persistence of the China Shock” asserting that China had a large effect on loss of manufacturing jobs in certain regions of the U.S. It builds on their earlier work. We haven’t had a chance yet to read this research paper, but will soon. 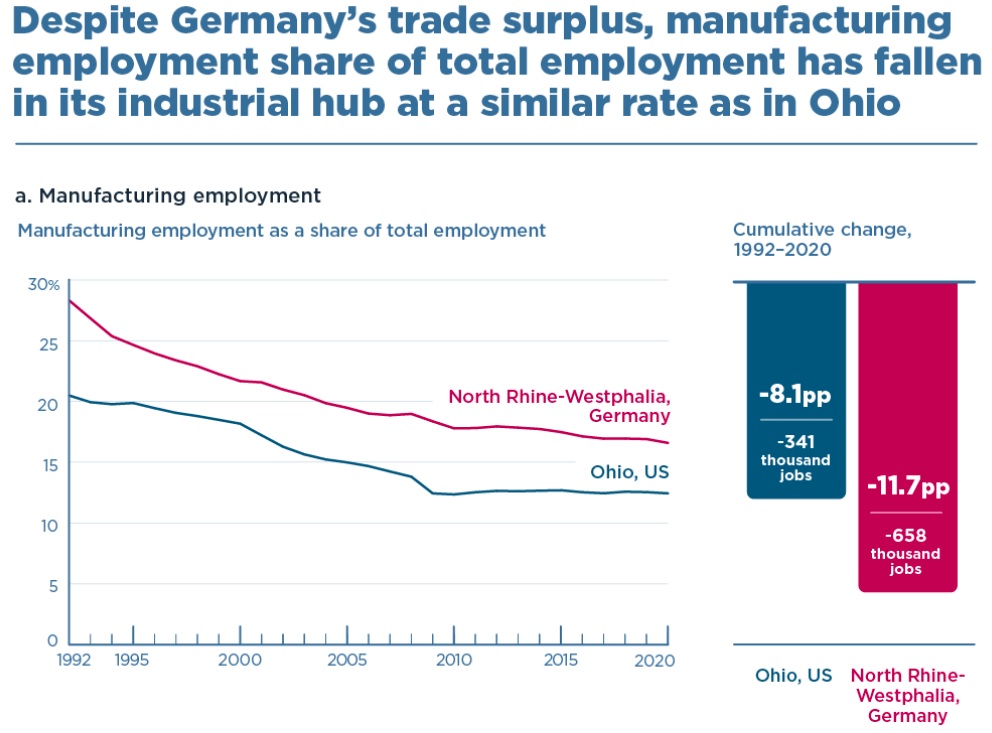 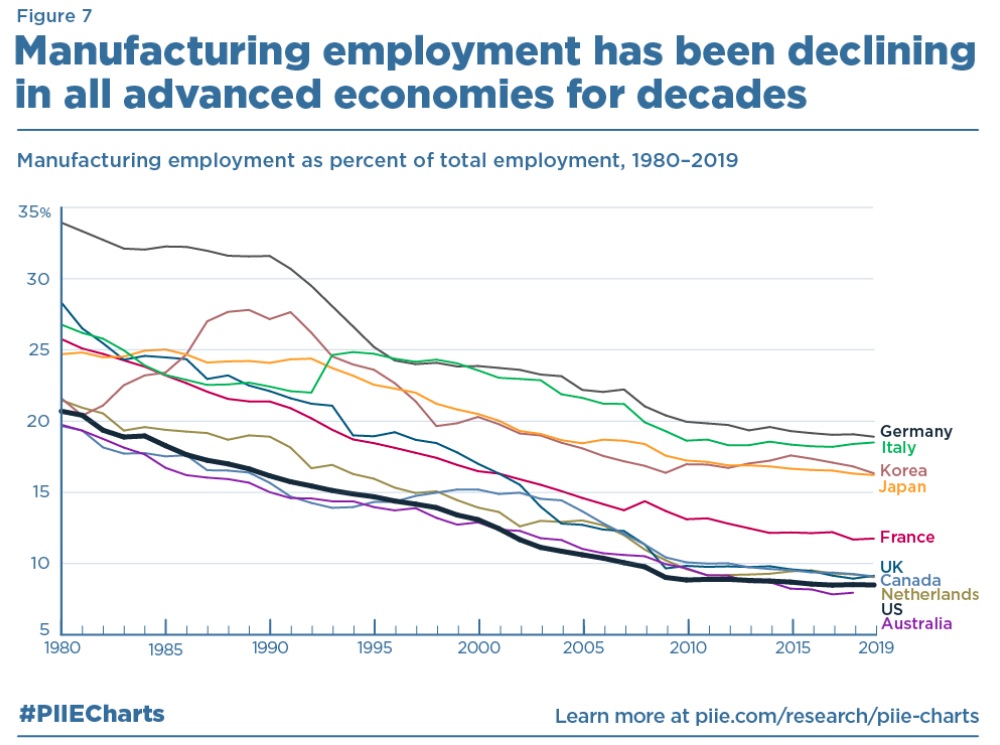 China Corner:  Xi is a Cat?

We admit that on occasion we spend an inordinate amount of time trying to figure out what our cats are thinking, usually after they’ve done something nonsensical, or at least nonsensical to us. We notice China experts often do the same…well, not necessarily with their cats, though they may do so too, but with China, trying to figure out the significance of China’s actions. So was the case with China’s crackdown on consumer tech when there was much discussion on why Xi was doing so. Some argued it was because he wants to re-focus on strategic industries, such as those found in the Made in China 2025 policy and in the 14th Five Year Plan. In other words, helping high tech industrial rather than consumer tech sectors. The always helpful Marcopolo.org provides good evidence for this argument in a recent article. They examined the 500 largest companies in China, pulled out the 238 tech companies on the list, and examined which of these companies were targeted with regulations and penalties. They found that “regulators almost exclusively targeted ‘bits’ (software) companies rather than ‘atoms’ (hardware) companies.” The larger the software firm, the more likely they were targeted. “Among the 62 firms that received official reprimands, 95.2% were bits firms. In the atoms category, only three firms got hit by reprimands.” It’s pretty clear Xi is trying to transform China’s economy to be more focused on what he considers strategic industries. But, of course, other crackdowns, such as on celebrity culture, the burgeoning feminist movement and “sissy men” make clear he is also trying to exert more social control. Whether he’ll be successful in transforming the economy is another question, as is the effect of oppressive control over people’s lives. Maybe we should get Xi a ball of yarn to play with to distract him. 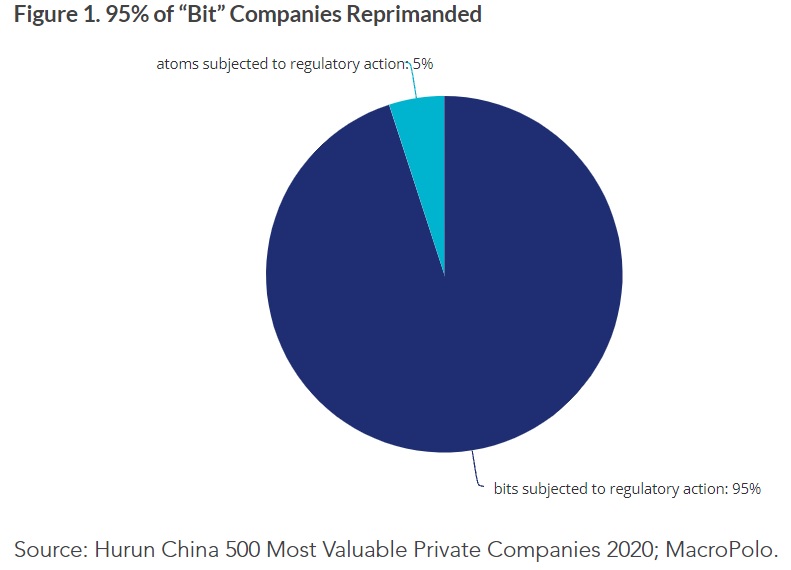 Covid and Mental Health, Who Governs Best & How Market Oriented is Chi... A Nation of Nincompoops, Fore!, and China’s AI Military
Scroll to top