The Thread is Thicker, Educational Improvements and China’s Green Billionaires

At nearly one in the morning earlier this week, as we listened to the rain from the “atmospheric river” pounding outside our house, we prepared to speak to a university in Vietnam over Microsoft Teams. Ahh, the glamour of international trade which requires one to stay up at all hours of the night to engage with partners around the world. We had been listening to the previous speakers, almost all whom were Vietnamese, since midnight and glanced at our presentation which we had ready to go on our handy Microsoft Surface (Microsoft, feel free to sponsor International Need to know for this plug).

A number of the presentations froze here and there, presumably due to broadband issues but we didn’t think much of it. We glanced at our phone to check the latest flooding news in Bellingham where our Mom lives, even while still keeping an eye on the proceedings in Vietnam. When we heard our name called, we turned on our camera and microphone and after the requisite introduction began our spiel as we started to share the PowerPoint presentation on our screen. Once the presentation was viewable, we began in earnest with our talk, which was to be short—only five minutes or so. We had been speaking for perhaps a fifth of that time when we realized we weren’t connected. Our colleague texted us to let us know we were no longer in the meeting room.

Quickly we tried to log back in, but Microsoft Teams was slow in re-connecting us (Darn, there goes our sponsorship). When finally we emerged back into virtual reality, we came face to face with the reality that our five minutes were up. Now well past the witching hour, the rain drumming down in mockery of best laid plans, we said our excuses, petted our cats who snoozed comfortably nearby with seemingly not a care in the world, and looked forward to one day again flying in person to Vietnam sans the virtual technological challenges. As we contemplate delayed flights and TSA we present to you the thick thread holding up humanity, educational improvements around the world and China’s green billionaires and continued Xinjiang abuses. It’s this week’s International Need to Know, the dressing, pie and nutritional part of Thanksgiving all wrapped up in one.

Speaking of Thanksgiving, INTN will be off next week for the American holiday. We will thankfully see you on Thursday, December 1st.

A Thick Thread Holding Up Humanity

As we get older on the rare occasions when we pick up needle and thread to repair a button or conduct some other simple sewing task, we find ourselves choosing thinner thread in order to have a better chance than a camel of navigating the eye of the needle. At the COP26 meetings, UN Secretary-General Antonio Guterres asserted “Our fragile planet is hanging by a thread.” We are fairly confident that thread is thicker than he realizes, perhaps even too thick for us to thread this metaphor. Not that long ago if humanity did nothing, temperatures would increase by 4 degrees in 2100. But now, after lots of technological and policy progress, the status quo “will put us on track for 2.7C of warming by 2100,” according to Carbon Brief. That’s still too high but much better than where we were a decade ago. And as we’ve noted in this space, we have and are making remarkable progress on clean energy generation and storage. And, there’s even some promise of fusion energy, which would change the world completely. And, it appears, though we take this news with some skepticism, that because of miscalculations of land-use, that emissions have actually been flat the last decade, not increasing. So with the end of what many believe were disappointing COP meetings, and in our reckoning, misguided, remember that our thread is thickening with time, although perhaps not yet quite a rope. 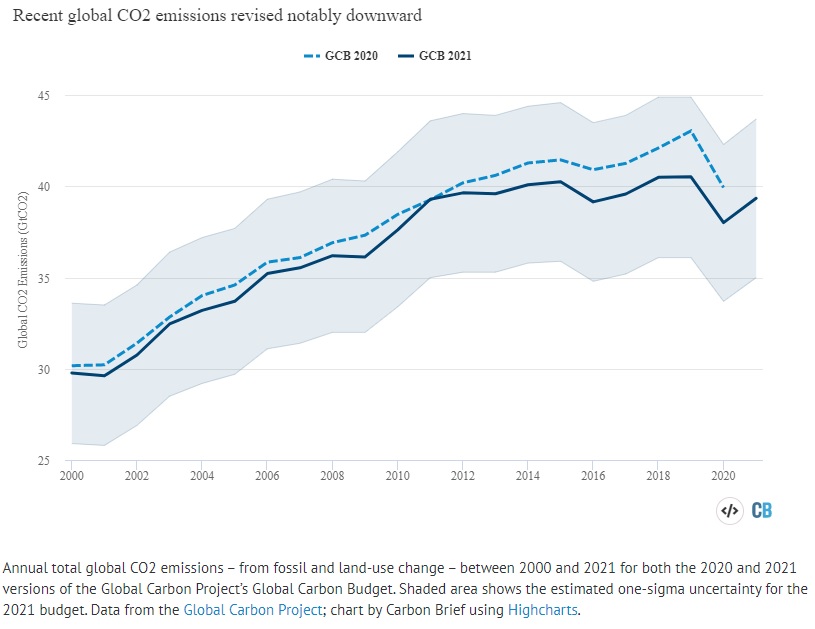 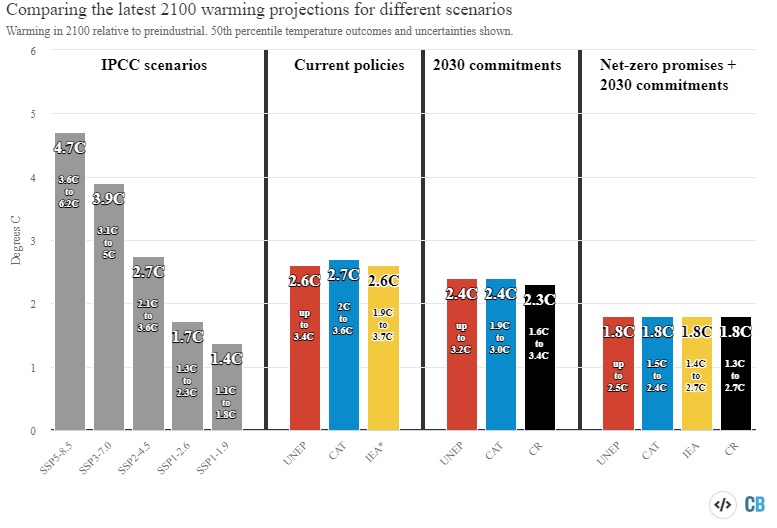 For reasons we hope will become clear fairly soon, we’ve been deep diving into educational data (and other stats about countries for that matter). As with most measures, the world has improved tremendously in educating its young people as you can see in the first chart below from Our World in Data. A far greater percentage of children have access to primary education than they did 20 years ago, even in some of the less developed parts of the world. In 1999, 41 percent of primary-school-age children were not in school in Sub-Saharan Africa, but today only 19 percent are not. We say “only” but 19 percent is still a lot of kids with no access to education. As Our World in Data notes, “Of the world’s 787 million children of primary school age 8% do not go to school. That’s 58.4 million children.”. The world has improved on education since 1999 but there is still much work to do to provide all children, no matter where in the world, access to education. Note even in North America there are 290,000 kids not receiving a primary-school education. The pandemic has made these numbers temporarily worse but let’s work to continue the kind of progress we had the last two decades. 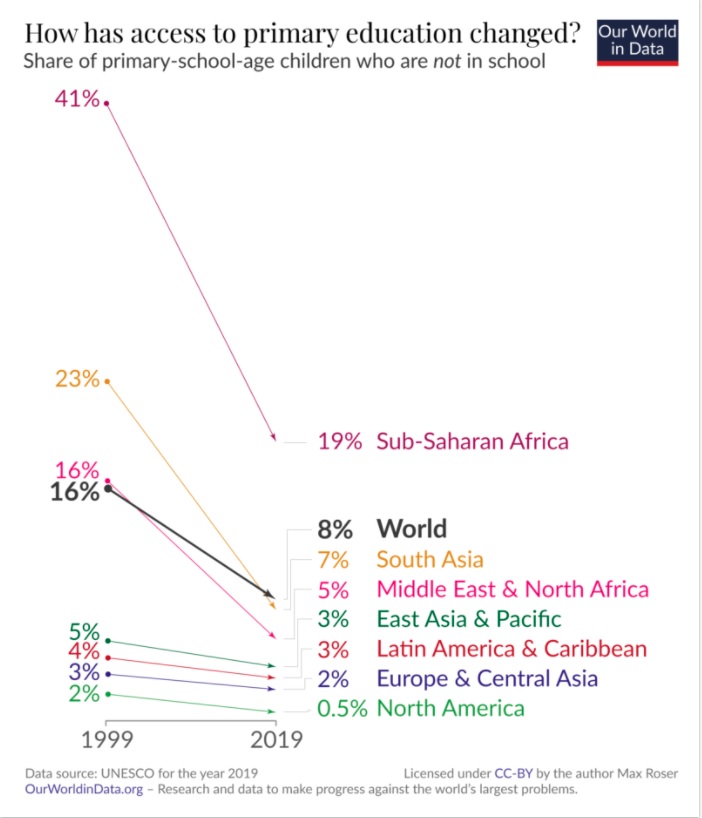 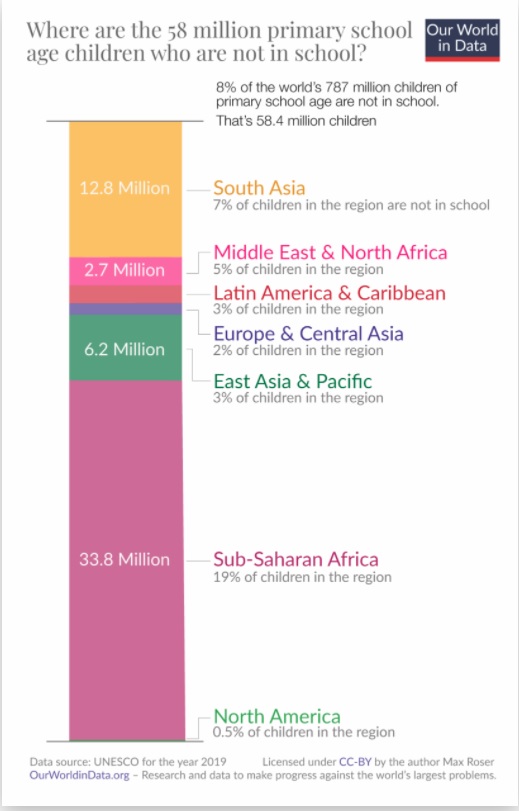 Last week we highlighted the complexity of China’s climate change posture–the largest emitter of greenhouse gases but also the largest market for electric vehicles. This week we add to the environmental complexity but also provide a reminder of China’s authoritarianism. First, the environmental complexity. Bloomberg came out with their List of Green Billionaires, folks who have made their fortune mainly through green industry. Elon Musk and his electric car company top the list, but “Eighty percent of the billionaires on the list hail from China, a sign of the nation’s preeminence as a manufacturing hub for clean technologies despite its leader’s conspicuous absence from the COP26 summit.” That there is money to be made in clean technology is perhaps the most hopeful sign yet that we can successfully manage climate change. But, before we get too excited about China, news also arrived this week of a Chinese man who went to Xinjiang, and using maps of detention facilities created by activists using satellite imagery, filmed them, providing even more concrete existence of China’s crimes against humanity (or perhaps even genocide under international law). Allison Killing reports that “In total the guy visited eight towns and eighteen facilities. This material is SO useful – to see these places from the ground helps confirm what we’re seeing in satellite imagery, gives invaluable up to date info and helps to corroborate that these places are in fact camps.” Enjoy that ride in your Chinese manufactured electric vehicle. 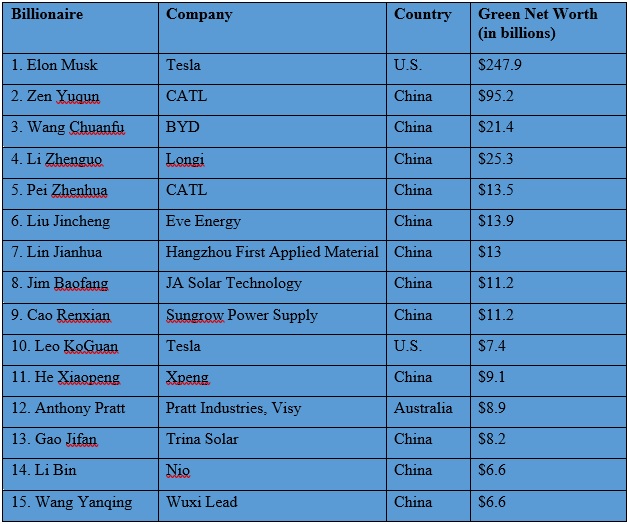 End of the Pandemic, Squinting at Squid Game and China’s Complicated ... Design Awards, Democracies Don’t Cause Famines, and China’s Marriage...
Scroll to top