Venezuela and Democracy, Who is Manufacturing, & Companies Worried About China

The racoon saga continues. There we were in our hotel room in Walla Walla at 6:30 am contemplating whether we should go for a walk, wander down to the gym or scan Twitter for the latest on possible Seattle Mariners’ trades and China temper tantrums over a democratically-elected leader visiting another one. Instead we answered our phone which suddenly rang with The Godfather theme. It was the guy closing the holes at our Mom’s house in which raccoons were nesting in the attic. A few days ago, a separate guy, the raccoon wrangler, had caught five in his traps. Five being a rather large number, he assured us that must be all of them and it was fine to bring in the handyman who would seal up the place.

But at 6:30 am the handyman–he works early and often—told us he found “fresh raccoon poop…very fresh,” up on the roof near the access to the attic. He went into great detail and descriptions on just how very fresh it was but we won’t bore you/gross you out with the details. So there is at least a sixth raccoon unaccounted for. We both agreed it was not the time to seal the attic, possibly with a raccoon(s) comfortably inside, who would undoubtedly not take kindly to being trapped. The raccoon(s) had already ripped the soffit apart to get in and who knows what he/she/they would do if trapped in the attic. So we called the raccoon wrangler and he is setting additional traps for however many more raccoons are up there. Six already seems like an army to us, or at least a platoon. We are considering ordering up HIMARS from DoD to better address the situation. And we also offer a defense of Venezuela’s democracy, spy on who is manufacturing the most and bring in the infantry to track companies leaving China. It’s this week’s International Need to Know, the Walla Walla wine country of international information and data

The cover of Rocky Raccoon by Lena Horne is real and swings, but we are as unsure about the legitimacy of the video as we are about how many raccoons are in our Mom’s attic.

We’ll be exploring apples and shoes next week, not necessarily in that order. INTN will be back on Thursday, August 18th

Should Venezuela Never Have Democratized?

Over the weekend we listened to Tyler Cowen interview Leopoldo López, a Venezuelan opposition leader currently living in exile. Cowen asked Lopez “do you ever look, say, at Qatar or United Arab Emirates, Dubai, and think the problem actually was democracy, and that here are oil-rich places that have stayed stable, in fact, but through autocratic rule, and that it’s the intermediate situation that doesn’t work?” Lopez did not agree that it was democracy that held Venezuela back. It spurred us to look up the GDP per capita rates for Venezuela, Qatar and the UAE going back to 1950 which you can see below. One item that jumps off the graph is that Qatar and the UAE’s GDP per capita has always been three to five times respectively the size of Venezuela’s. Qatar and the UAE didn’t become independent from the British until the late 1960s when they changed from a foreign-run nondemocracy to a homegrown one. By 1978, at that time a democracy, Venezuela had caught up some in GDP per capita and then completely caught up in the late 1980s when there was an oil glut causing a huge drop in oil prices and thus cratering the two Middle East countries’ economies. Qatar and the UAE saw their GDP per capita take off in the early 1990s. Since the 1970s, Venezuela has performed badly when still a democracy and catastrophically in its current authoritarian form. So maybe Venezuela, if it had an Emir since 1970, would have performed better than it has. But of course its performed worse as a non-democracy. And it’s worth noting that Latin America as a whole—with a few exceptions such as Chile—has mostly underperformed compared to other regions for decades. And we know from various academic studies that democracies on average perform better economically than non-democracies. Still, always interesting to check the data. 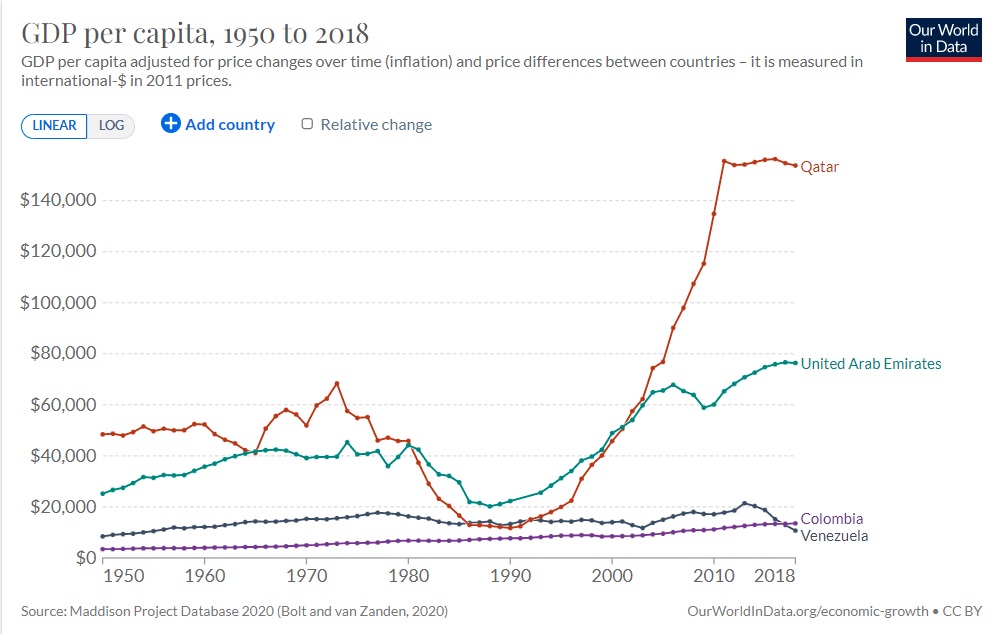 Who is on the make? Or rather who is making things for the world? Of course, China is the largest manufacturer in the world, as you can see in the chart below from HowMuch.net, a financial literacy website, and the U.S. is second, followed by Japan, Germany and South Korea. One factor to keep in mind on this excellent visual is that the data is from 2018 and since then there has been a pandemic, worldwide inflation and a major war in Europe (let’s hope the next three years are better than the last three). However, we bet the order is still the same though the numbers have likely changed some as companies diversify out of China and Germany’s economy suffers. In a presentation we made last week we talked about the need for global supply chains to diversify to make them more resilient. This graph is a great illustration of the need for this. Too many products and their components are made in China. This is already slowly starting to change. We bet a chart using 2022 data would show Vietnam with a larger percentage of manufacturing since some final assembly has been moving from China. We bet it will be even larger three years from now. We bet ten years from now you will see more African countries on this chart (we may have a gambling problem). We are very curious to see what Russia and India’s numbers will be in the future. 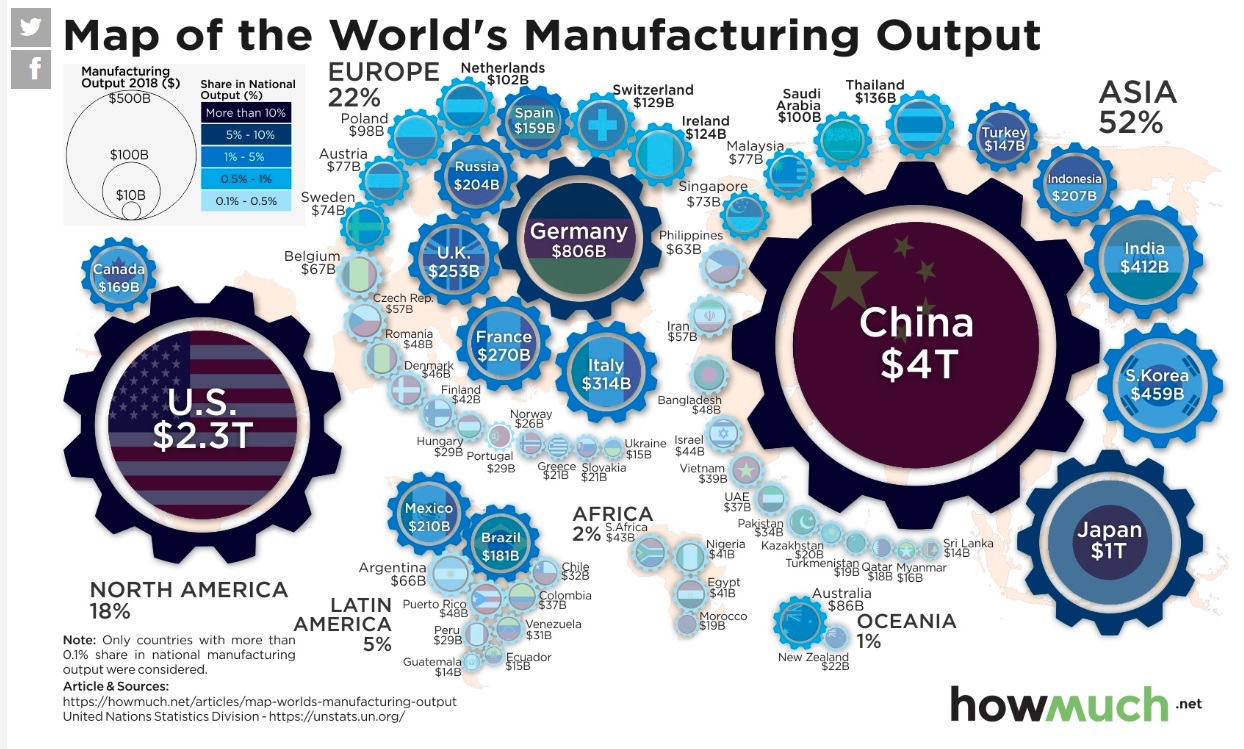 We discuss above the slow diversification of supply chains out of China. And we’ve documented how China is increasingly closing its economy to foreign companies. Sometimes it’s hard to find the data but recently anecdotal evidence slaps us in the face like a Will Smith multiverse. Three examples in the last week: Jeep is pulling out of China, European business people are increasingly complaining about China’s tactics and British companies are heading for the China exits. If we recall, three is a pattern and you can certainly see it in the quotes from the three articles. The CEO of Jeep, Carlos Tavares, says, “We have been seeing over the last few years more and more political interference in the world of business in China.” Meanwhile in the Guardian, Tony Danker, director general of the Confederation of British Businesses, says, “Every company that I speak to at the moment is engaged in rethinking their supply chains … because they anticipate that our politicians will inevitably accelerate towards a decoupled world from China.” We remind Danker that China started the decoupling many years ago, but, yes, many countries are now seeking to do so themselves. Meanwhile, the Financial Times also covers the story and again quotes Tavares, “There is growing political interference in the way we do business as a western company in China.” We expect these patterns to continue and expand in the coming years.

Ukraine’s Fight for Survival, Pakistan’s Economic Problems and the... Breaking Good, Beer Economics and a Country By Any Other Name
Scroll to top