Twenty-one years ago—the length of time required for an American to legally drink—we were walking from one of the side fields of the Mariners’ Peoria, Arizona spring training complex towards the main stadium when suddenly we were nearly stampeded by a large herd of Japanese media. We looked up and walking in front of us was number 51, their target, Ichiro, just beginning his first season in Major League Baseball. The size, passion and intensity of the Japanese media was our first clue of what a big deal the one-named wonder was in Japan and soon would be everywhere that people appreciate baseball. Ichiro went on to win both rookie of the year and MVP awards that season and have one of the best careers in baseball history. And yet for us, it wasn’t just his talent, it was his wit and wisdom—his entire personae—that captivated us. He once said, when asked about an upcoming road trip to Cleveland, “To tell the truth, I’m not excited to go to Cleveland, but we have to. If I ever saw myself saying I’m excited going to Cleveland, I’d punch myself in the face, because I’m lying.” But he also said, “Personally, I don’t like the term ‘success.’ It’s too arbitrary and too relative a thing. It’s usually someone else’s definition, not yours.”

He was as wise, funny and endearing last weekend during his speech at his induction into the Seattle Mariners Hall of Fame. And, baseball, always providing moments and metaphors about life itself, gave us rookie phenom Julio Rodriguez entering stage right as Ichiro gracefully waltzed off stage left. The circle of life displayed by a round bat hitting a round ball on a baseball diamond. And so we slap a single about service trade, throw a laser bullet from right field on possible Vietnam bubbles and steal second on China’s quantum computing. It’s this week’s International Need to Know, like Ichiro’s Shiba-Inus, howling (at 12:42 mark) about international information and data. 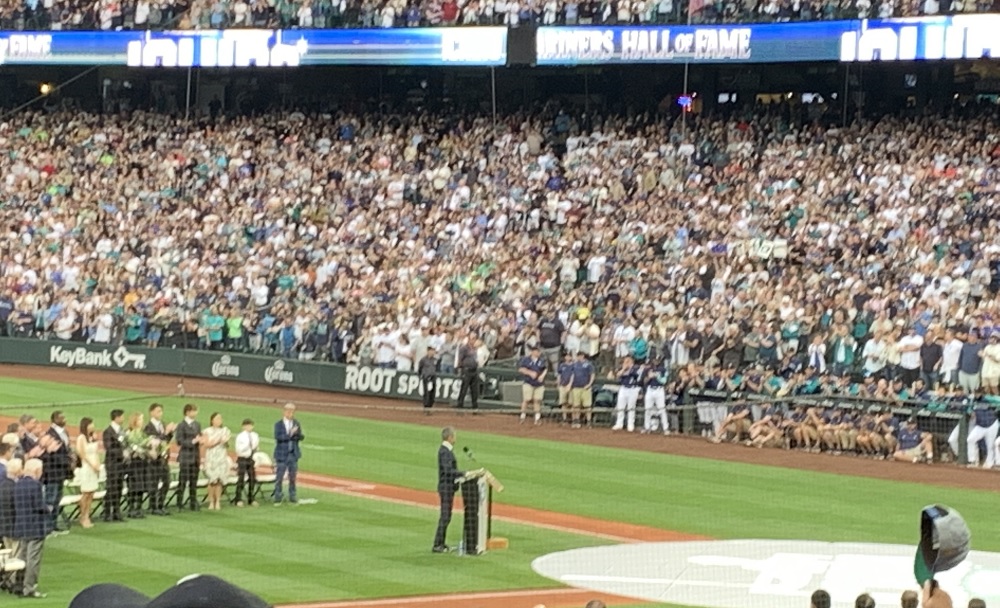 While researching a different subject at the website of the United Nations Conference on Trade and Development (UNCTAD) (What? What do you do you with your spare time?), we stumbled upon service trade data. Most international trade data you see in the news is merchandise goods stats—things you can touch and feel like cars, airplanes and iPhones. Service trade is stuff you can’t touch and feel such as engineering services, software and international students (please, please don’t touch the students). China is the biggest merchandise trader but the U.S. is the largest service trader with more than twice China’s combined exports and imports of services. As you see in the chart below, the relatively small UK is the second largest service trader. Ireland is fifth. Ireland is so high partly because it acts as a tax haven for tech companies due to its low corporate tax rate. Ireland’s success in attracting companies is one of the reasons many countries have been arguing for a corporate minimum tax around the world. You’ll note that America’s share of service trade has fallen by only 1 percent the last ten years. China has increased its share by 2 percent. Ireland has doubled its share. We are curious where India will rank ten years from now. 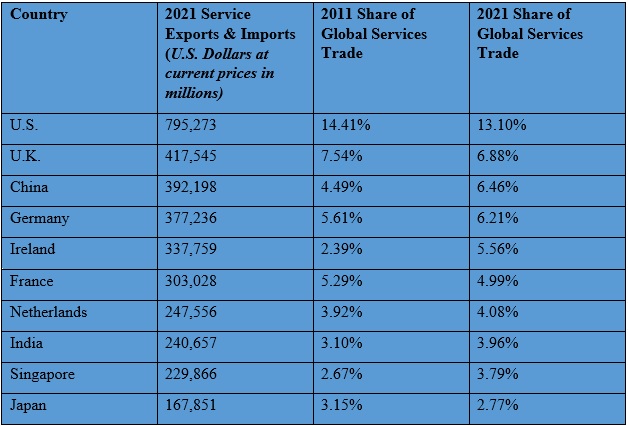 Everyone we know is drinking bubble tea like it’s going out of style. But, of course, economic bubbles are evergreen. Vietnam has been a huge beneficiary of companies diversifying out of China as we’ve discussed throughout the year. But is Vietnam importing China’s housing bubble too? Shuli Ren, a Bloomberg columnist worries it is so.  She wrote recently, “From the love of real estate, to the practice of pre-sales, to developers’ corporate governance, Vietnam shares too many similarities with China for comfort.” It is true, as you can see in the chart below, that housing prices rapidly increased in Vietnam in the year before the pandemic, and then fell, but are now on the rise again. This is especially true in the commercial capital of the country, Ho Chi Minh City, where “Real estate prices…skyrocketed during the second quarter of this year to hit record highs.” It would be wise for Vietnam, as it continues its growth, to avoid the mistakes China made in real estate and debt accumulation. Few fast growing developing countries do avoid these mistakes, unfortunately. We will be in Vietnam soon and while we won’t buy any houses, we will certainly examine the real estate market carefully. 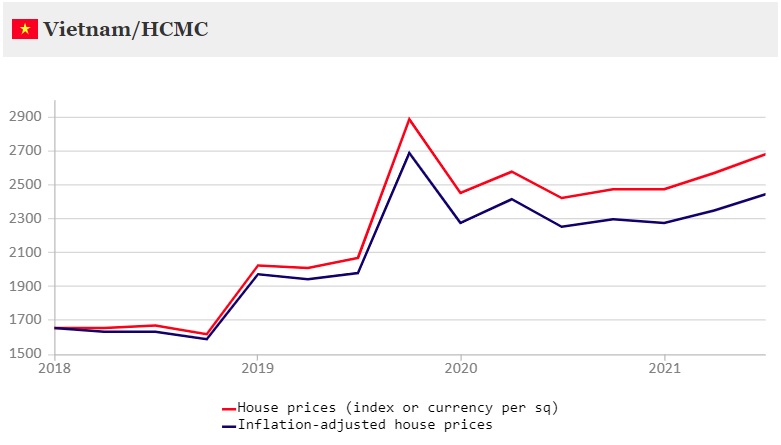 We continue to try to measure the Competition of Competence between China and the United States (and other parts of the free world). One area to keep a close eye on, and where China is making big bets, is advanced technology. Lots of analysts believe the U.S. is still far ahead of China. Others believe China is in many ways ahead of America. We are agnostic on the question. And we are also agnostic on whether China really has developed a working quantum computer as PC Magazine is reporting. Baidu, a kind of China Google, has been working hard on quantum computing and AI. According to PC Magazine, “Baidu launched its first superconducting quantum computer called ‘Qian Shi,’ which it claims is the world’s first ‘all-platform quantum hardware-software integration solution’ and is already available to use by the public.” We have seen other remarkable announcements by Chinese companies that turned out to be more hype than real. And, of course, non-Chinese companies are also busily working on quantum computing, including as the magazine notes, Fujitsu in Japan, Google (a kind of American Baidu) and good ole IBM (Editor: they’re still a company? INTN: Apparently so). We have predicted that China’s economy going forward will grow at about the same rate as America’s and Europe’s. But that does not mean its technological prowess will not continue to impress. The competition of competence will be a keen one. 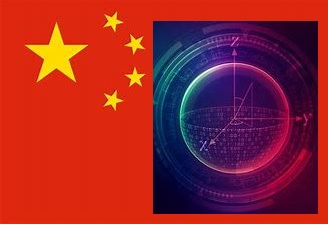