So we were riding our bike the other day, headed south off the trail and on the streets rolling through our post-pandemic, post-empathy world, when a red sedan sped through the stop sign of the intersection we were traveling through, missing us by a heartbeat. It was no California stop by the miscreant car, they were traveling some 30 MPH paying no attention to the stop sign whatsoever. And yet we were more shaken later in the day when we were headed southbound on the world famous Greenwood Avenue (Editor: What? INTN: If hundreds of restaurants can claim their hamburgers are “world famous” we figure we’re on solid ground giving the same moniker to random Seattle streets) where we saw a family consisting of a mother, father, newborn baby in a stroller and handsome golden retriever waiting to cross the street in the crosswalk. So we pulled to a stop to let them do so.

Greenwood is a two-lane street with a turn lane between. We looked in our driver’s side mirror and saw an SUV tearing down the turn lane at high speeds, apparently annoyed we were stopped in the street and wanting to fly past us. At this point the family was in front of our car and about to cross into the turn lane area. We honked our horn and desperately rolled down our window to stick our arm out to warn the driver to stop their nonsense. They slammed on the breaks as the family came into view and everyone lived to see another day. Had the car slammed into the mother, father, baby and dog we’re unsure whether we would have ever gotten over it. It is possible we would have pummeled the driver for so needlessly breaking the law and endangering lives. But instead we live to tell people to stop saying globalization is dead, wonder if the internal combustion engine has peaked and check under the hood of China. It’s this week’s International Need to Know, cruising down the information highway of international information and data.

We’re off next week, returning on Thursday, September 22. Drive carefully while we’re gone.

Another Wrong Claim Globalization is Dead

Thank goodness global analysts aren’t coroners. They have declared globalization dead so many times over the last ten years that it certainly would have been buried alive like an Edgar Allen Poe global horror story if we had listened to them. The Lowry Institute’s debate on “Does Southeast Asia Need a New Development Model” is the latest crackpot coroner: “Meanwhile, the hyper-globalisation and diffusion of complex global production networks that propelled Southeast Asia forward for decades now seem well and truly over. As leading Asia business analyst Vasuki Shastry astutely notes, ‘Southeast Asia is hard-wired for global integration at a time when globalisation is stalling.’” And yet there is not a shred of data to support this assertion. Vietnam, Indonesia and other successful Southeast Asian countries are benefitting from globalization and the diversification of supply chains out of China. We’ve documented, with data, this phenomenon in this space many times over the last year. Don’t trust us as a source? Trinh Nguyen, senior economist at Natixis, displays the data in a recent Twitter thread.  She notes how well Vietnam is doing, including in retail sales and that ASEAN countries are leading the world in economic growth and in manufacturing growth. Not to mention Vietnam and Indonesia have both seen 10 percent increases in foreign investment in manufacturing. People love to declare globalization dead and then use its fake death to explain how this will affect economies. But they are dead wrong about this. 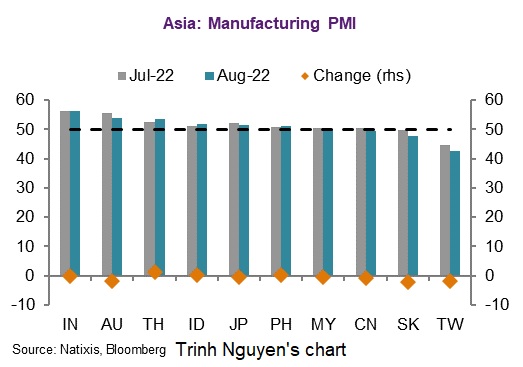 Here in Seattle, home of the wealthy and self- environmentally conscious, we can’t make a dangerous left turn without running into a Tesla, or at least a Prius. But we’ll be seeing more and more electric vehicles on the road around the world in the coming years. In fact, BloombergNEF believes the number of internal combustion engine (ICE) vehicles will peak this year at 1.23 billion. By the end of this decade the number of ICE vehicles will decline by 13 percent. And from there it goes off a cliff like a global oily Thelma and Louise. But that will still leave lots of ICE vehicles on the road. Two big policy challenges in this transition are to provide incentives for people to ditch their ICE vehicles more quickly and to build the infrastructure to support electric vehicles. And a challenge to the latter is currently such construction processes also emit lots of CO2 into the atmosphere. So there’s lots of work still to do. One other interesting datapoint from the BloombergNEF article is that there are now 27 plus million electric passenger vehicles. This is a drop in the bucket compared to the number of ICE vehicles but there are “also just short of 300 million electric two- and three-wheelers — the scooters, trikes and tuk-tuks that dominate roads in Asia.” We are seeing more and more of those vehicles here in Seattle too. We’ll know this is a real trend when we see them in Phoenix next year during Spring Training or in Dallas for…we have no reason to go to Dallas, no offense, Texans. 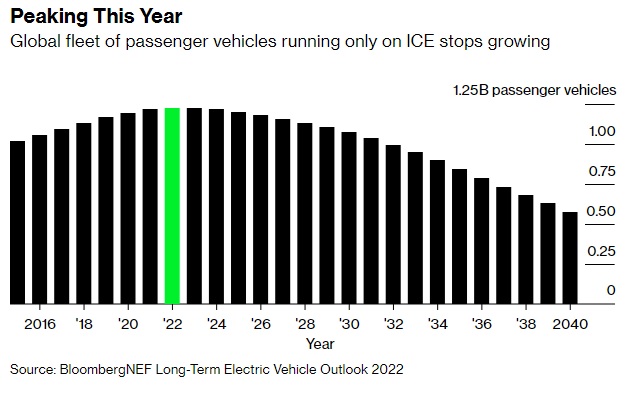 China has announced the 20th Party Congress will begin on October 16, during which Xi Jinping will presumably be chosen to continue his leadership of the country in one exalted position or another. But how is China doing? If it were up to a vote of the people, what would they say with their ballots? Hard to tell, of course, but China is certainly in a rough patch. You’ve presumably read about the slowing economy, real estate problems, Zero-Covid closures and heat waves. But remember that Xi also cracked down on consumer tech companies, partly to dampen their leaders’ power but also to try to direct China’s efforts towards technology that makes tangible things. But, as you can see in the chart below from Preqin Ltd, “capital raised by China-focused venture capital funds is way down.” So just how effective has the crackdown on consumer tech been in pushing money to other kinds of tech? Certainly State money is going toward the kind of tech Xi likes such as semiconductors but not coincidentally there have been a rash of arrests in the semiconductor industry for various fraud and malfeasance. Meanwhile, in Hong Kong, where Xi also lowered the hammer in recent years, there has been a huge exodus of young people. In fact, “the population of people aged 20-24 dropped 23% in just 6 months.” Too bad there can’t be a primary challenger to Xi. 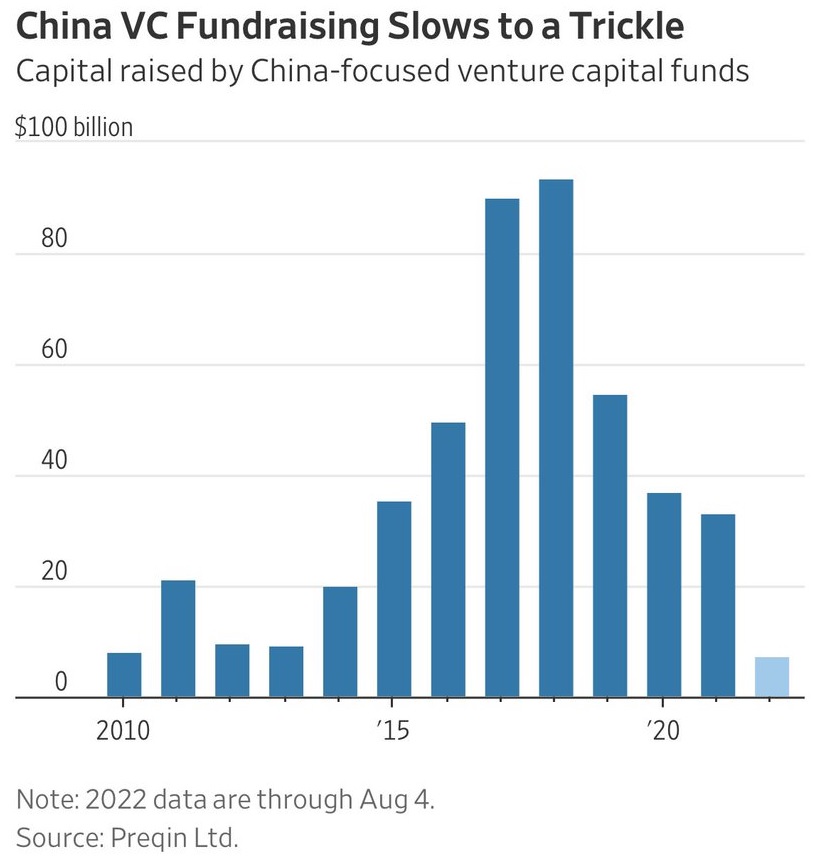