Where the Buffalo Roam, All Intl Orders Are Not the Same and Chips Ahoy

Our hall of fame college soccer friend Brian explained to us a few years ago how relegation works in English Premier football. Certain teams are so crappy they are demoted to a lower league. Even though we are ignorant of the sport and occasionally make fun of it we had to admit this was a good idea. In fact, it could be applied to many things in life: political parties, singers and it certainly could be applied to Kyrie Irving. You probably heard he posted a link on social media to a movie/book that among many other demonstrably false and repugnant claims denies the Holocaust occurred and that Jews control everything.

Relegation could also be applied to Kyrie’s team’s general manager, Sean Marks, who is hiring Iwe Udoka, the head coach currently under suspension by the Boston Celtics over his relationship with a team employee. Or to the owner of Kyrie’s team, Joe Tsai, who has defended China’s instituting a National Security Law in Hong Kong that ended freedom of assembly and expression there, and who has enabled crimes against humanity in Xinjiang, China. Since, come to think of it, political parties and singers are relegated all the time—the former during elections and the latter in ticket and streaming sales—it’s not a stretch to relegate the Brooklyn Nets. They richly deserve it. As we send the Nets, Irving, Marks and Tsai to the G League, we discuss in which areas of the world animals have been relegated out of existence, explain how international orders are not all the same and investigate the chip war between China and the U.S. It’s this week’s International Need to Know, the daylight savings time of international information and data, always springing forward, never falling back.

Where the Buffalo Don’t Roam

If there were a species in the pecking order higher than humans, they would label us an invasive species. We humans have proved adept over the millennia at eradicating other animals. As you probably saw recently, the WWF (World Wide Fund for Nature, not the World Wrestling Federation) released their most recent Living Report. The results are sobering with a 69 percent decline in species populations since 1970. You can read the whole report for more details on that aspect but for our international beat here we focus on the differences by international region. As you can see from the chart below created by Times Earth from the WWF data, Latin America fares the worst with species populations down 94 percent since 1970, followed by steep, but somewhat less so, falls in Africa and the Asia Pacific. North America has seen a slight rebound in recent years, as has Africa. North America’s humans had already slaughtered most of their species populations by the time 1970 came around so couldn’t do much more killing the last 50 years. But the glimmer of hope is that slight rebound of the last five years. We take our glimmers where we can find them. 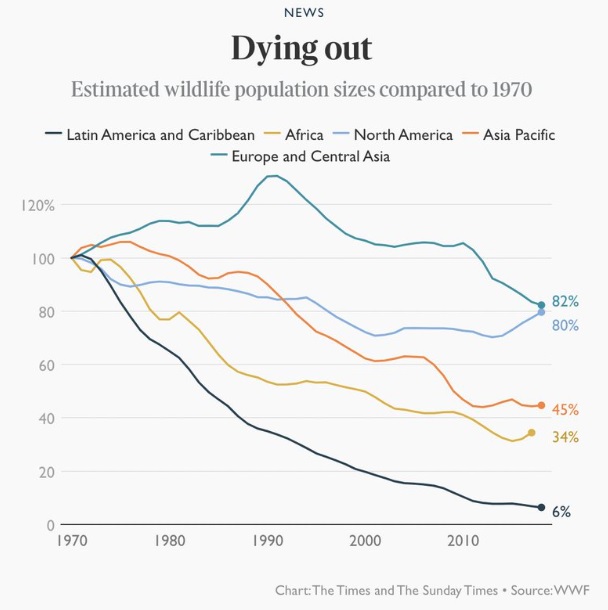 All International Orders Are Not The Same

Someone who should know better recently said the new international order China wants to create is no different than the one the U.S. created. Essentially, this person argues (and no, we’re not going to name them, it was on Twitter and there’s enough piling on there already) that the U.S. wanted to control the world and now China does. This betrays a) a lack of understanding of the current liberal international order; b) how that order was created and; c) the difference between China’s governing system and America’s. First, for all the bemoaning of the international order, which is indeed flawed, its virtues are almost always ignored. Everyone castigates the UN, for example, for not doing more to prevent wars or address human rights issues. And the UN is not great in this regard. But there are many organizations within the UN, it is not just the General Assembly, and these organizations often do boring but helpful work on technology standards and more (China is trying to corrupt these standards). Plus, the UN this very year accomplished a number of important things. For example, the UN helped negotiate a solution so that wheat started being transported out of Ukraine again (and working with Turkey, strategically pressured Russia this week to back down from pulling out of the agreement). The international order certainly needs to evolve and has been damaged in recent years, including by the United States. Meanwhile, China and Russia are trying to change it into one that will make the world safe for authoritarianism. But it works better than the pre-World War II world. The U.S. was the leader in creating the post World War/post Cold War liberal rule-based International Order but did not do so on its own. A variety of countries played a part in creating this order. China is an authoritarian government, becoming more so all the time. It is trying to create a world in its authoritarian image, not in the image of the flawed but free western democracies that created the order, one that for all its flaws made for a better world than existed pre-World War II. 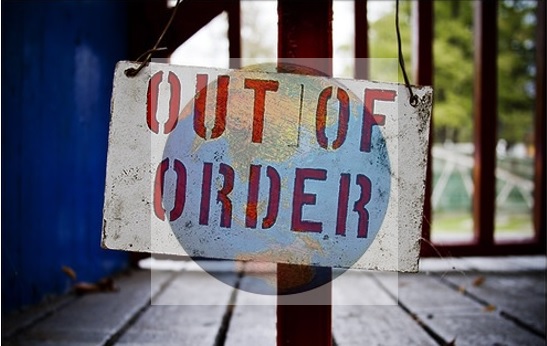 You undoubtedly saw two weeks ago that President Biden signed an executive order placing what appear to be strict conditions on exports of semiconductors for AI and other high end purposes, and likely more important, on equipment that makes such semiconductors. We have seen lots of analysis that this is a huge deal that will cripple China’s semiconductor industry. Others think it will just speed up China’s efforts to develop their semiconductor industry and they will be able to do so given their technological prowess. Such analysts believe it will in the mid to long run hurt U.S. competitiveness, that other countries will not go along with this “decoupling” of the industry. And, there are some in the export control world who are skeptical that it is such a big deal at all. They argue that more important than an executive order putting such restrictions in place are the folks in the bureaucracy who do the work on the ground. Apparently, companies apply for exceptions all the time on export controls and unless the export control staff are strict, restrictions on paper won’t matter much. We are not at all sure what the consequences, and even more important, the unintended consequences, for all this will be. China has worked to decouple from the U.S. and the West for a number of years now, including through its Made in China and Dual Circulation Policies. The Biden administration appears to now be working towards decoupling as well—there are reports that other sectors beyond semiconductors will soon see more restrictions. We believe a diversification of global supply chains—less goods and components should be made in China—will be beneficial (see our latest Substack article). Decoupling, whatever its merits geostrategically, will mean a less efficient world economy. But we wait and see what will be the real impact of this semiconductor measure.