No creature craved love more than Putter Magoo Mullian. Food was not what he craved, nor hunting nor going outdoors, though he certainly wanted all of those at one point or another. But what he had to have, what he needed, was to be held, to be petted, to be talked with, to have someone play with him. Putter was a connoisseur of love and attention.

When my wife or I came home from work, he would trot up happily to the door, often leading me to the bedroom, where he would hop onto the bed, and I would pet him as he purred and rubbed up against me. If I made the mistake of talking with my wife first, often in the kitchen, he would barge in and meow and meow until we both paid attention to him.

When he was young, Putter liked to play fetch. I would shoot one of my wife’s hair bands (he stole them from the bathroom) out of the family room to the end of the kitchen. Putter would run after it, picking it up in his mouth and trot back, setting the hair band on the floor in front of me and then stand formally, gazing up expectantly with his large eyes. I had never seen another cat do this. But he was also a traditionalist. For years, every night he would play with the laser which he chased with—well, with laser-like focus—until he would make an upset noise, outraged that he could not catch the red dot. And yet the next night, he always tried again.

Some nights, sitting in the family room, we would hear a strange sound. First, a clomp-clomp, and then Putter’s voice stretched between a whine, scream and demand. And then he would come around the corner with his favorite toy gripped in his mouth—back then a stick with a long feather attached to it—the stick knocking on the ground as he walked–thus the clomp-clomp sounds. Putter’s eyes and demeanor informed us it was time to play.

And Putter was very verbal, capable of an astonishing array of sounds, far beyond the traditional meow. Whenever he leaped onto a bed, chair or couch, he made a sound. When he was upset he sounded like a stereotypical teenage girl, lamenting how unfair life was. It was easy to tell Putter’s mood, even beyond his verbal signaling. If he was happy, his tail was sky high and he often trotted rather than walked, his paws lifted up jauntily as if he could defy gravity.

He loved to sit on our laps when we watched TV. He would stretch out to his full length on my wife’s lap sinking ever further into her as he fell asleep, sometimes snoring, often dreaming, his whiskers moving and sometimes his whole body jerking as he chased a dream, secure in the safety of his Mom’s lap. Sometimes he would lie between us, making sure he was touching us both, a paw on one of our legs, his body on the other, needing all his people around him.

In his later years, he developed the habit of climbing up on my shoulder, holding onto me like a koala grips the branch of a eucalyptus tree. He would rub his head against mine, and against my glasses, climb ever higher and burrow himself ever deeper into me, as if he could never get close enough. During the pandemic he often did this during my Zoom meetings, usually becoming the star of the meeting or if I was making a presentation he surely was what the audience remembered and not anything I said.

When Danielle came into the room to pet him while he rested on my shoulder, he never purred louder or looked so happy and content. Everyone in the house loving him, and displaying their love for him. That was what he needed and wanted: house guests, contractors, veterinarians—everyone who came into contact with him—all were pulled into his loving orbit, petting him and remarking on what a sweetheart he was.

In fact, mostly he did not want to be alone—he was no solitary cat. If he wasn’t with us then he cuddled with our other cat, Willow, burying himself with her wherever she tried to rest. In fact, Putter was occasionally a nuisance to Willow, so often did he follow her to her sleeping lairs around the house, burrowing into and snuggling with her. And while it is true he would sometimes become jealous of Willow whenever she received attention from us, he proved his loyalty to Willow. One day when we came home and opened the front door, Putter frantically meowed and made noises and cajoled us–Lassie-like–to follow him up to the bedroom where we found an injured Willow (it’s a long story how she got hurt). She recovered fine but it was clear from this incident and others that no matter Putter’s occasional spats with Willow, that only he was allowed to give her a hard time, and nobody else.

But there was no rest from Putter, who wanted to be cradled, held and caressed. We did not usually let him sleep with us but when we did, he would trot to where I laid my face on the pillow, looking at me like, “Isn’t this great! We’re sleeping together.” He would usually start off near my stomach, washing himself thoroughly to prepare for the night’s slumber. I would drift off to sleep but when I woke in the middle of the night, as I often did, I would find Putter right next to my face, sometimes his paw in my hand, and he would look at me with a gaze of contentment and love.

When we went to bed without him, he always walked with us upstairs and at the door I would have to lift him up so he could have Danielle pet him and coo kind words into his alert ears. He did this nearly every single night. The walk is lonelier now.

Perhaps it makes sense that Putter, who only craved love, would suffer from a young age with heart problems. Maybe no heart can hold such a capacity for love without consequences. His first emergency was at the tender age of seven when he suffered heart failure. At the emergency vet, they put him on oxygen and when we went in the back to visit him in intensive care, the nurses and vets gave us sorrowful stares, assuming that Putter would not survive. But he did, almost miraculously, to the point he even started playing again, chasing that laser with crazy determination, with such vengeance that it made us worry, thinking surely this can’t be good for his heart. His cat cardiologist (yes, there is such a thing), wrote loving notes about Putter after his checkups, calling him a sweetheart and expressing repeatedly, “I love that guy.” It was a common reaction from all the nurses and vets he came into contact with in the ensuing years as Putter’s health was always a concern. For ages he was on multiple heart medications and in his latter years he was like an old man living in Florida, taking medicine throughout the day, gazing at the outdoor sun from the safety of a couch, a cat bed, or preferably a lap.

Perhaps nobody enjoyed the pandemic like Putter did. It meant his people were with him twenty-four seven. I remember during the height of the pandemic reading articles describing how other people’s cats were a bit miffed to not have the house to themselves. But for Putter, the pandemic was the perfect scenario—he always had a lap to leap on, a shoulder to nestle his head into. His cravings for love now nearly always answered.

But years of taking multiple heart medications took a toll on his kidneys. And of course, he was now 16. Yes, almost written off at seven, Putter would play and cavort and get love for another nine years. But whatever we gave to him we received back in multitudes. It really is true that the love you take is equal to the love you make.

Putter made the world a better place for all he came in contact with. It is a lonelier place without him. When we walk by the bedroom we flinch not to see him curled up on the bed. Each morning instead of him climbing up onto our shoulder as he did first thing in the morning each day, we shiver a bit in cold and loneliness. Instead of sitting on the couch each night before bed with Putter on our lap, we must now face the end of the day without his love and warmth. Every one of us experiences such in life, the pain that alerts you that you are still alive. The house that he ruled with a velvet paw is quieter, lonelier, missing its loving anchor. Your pets come into your life bringing joy and chaos, and then they leave all too soon, in our case as the gray storms of mid autumn remind you of a world too short and too dark. No creature craved love more than Putter. No creature deserved it more. 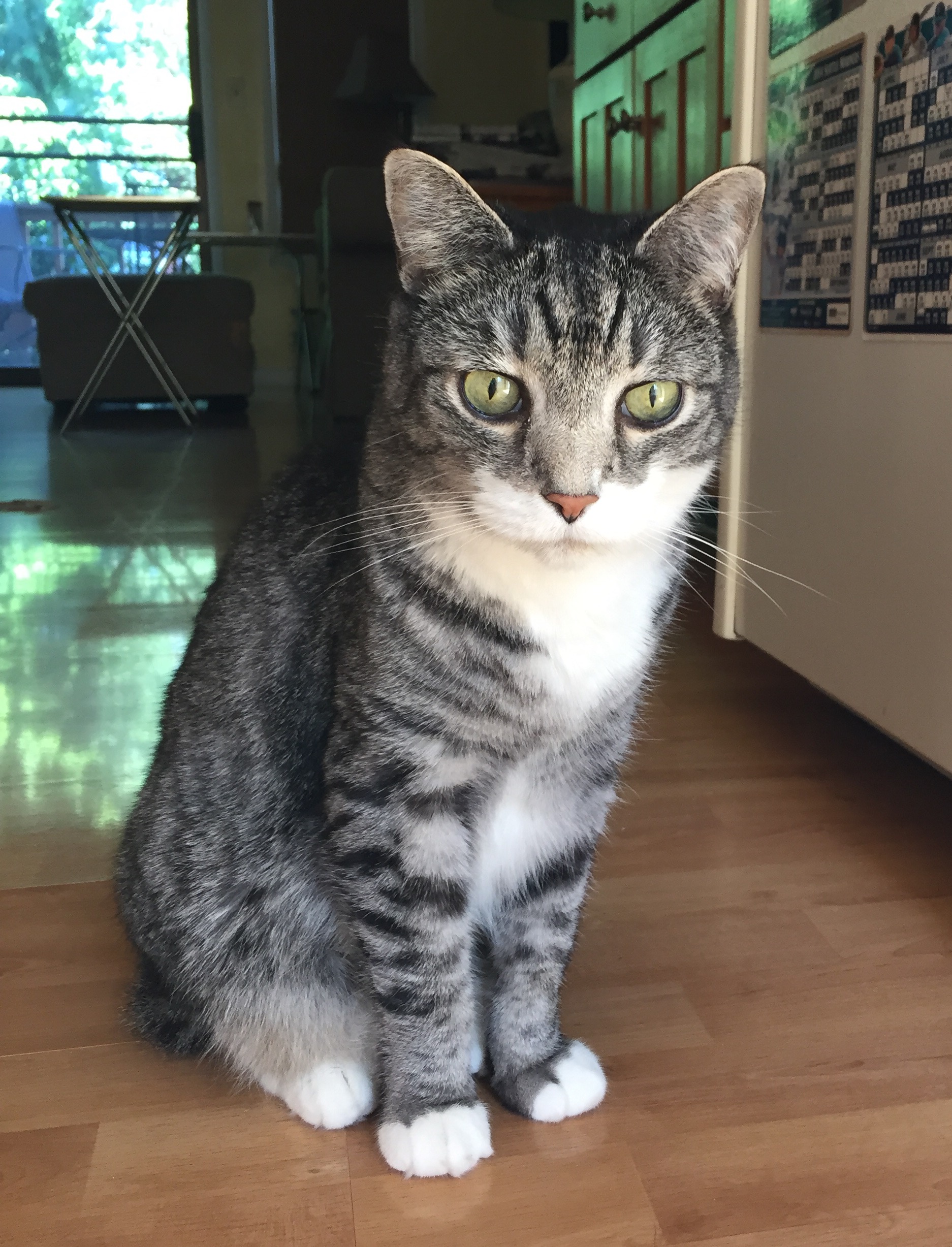 Bullets Not Bullets, Electricity and Wind are Winning and China’s Closing... Where the Buffalo Roam, All Intl Orders Are Not the Same and Chips Ahoy
Scroll to top