Some weeks the world can be especially disorienting. As we continue to reconcile ourselves to a world without Prince, a fall election featuring Donald Trump and a Seattle Mariners team in first place, we still find time to take a passage to India, wonder about Moore’s Law of Mad Scientists and ponder where the part-time help is located. It’s this week’s International Need to Know, providing a Sign o’ the Times in a purple world of international information.

An Economic Passage to India

India has many challenges going forward, including ongoing infrastructure deficits, large environmental challenges and a bureaucracy as skeletal and large as the Tyrannosaurus Rex in the lobby of the Natural History Museum. And yet India has been doing relatively well in recent years. So far in 2016 they have one of the world’s fastest GDP growth rates; last year they were also near the top with GDP growth of 7.6%. And, India is now, as you see in the chart below, the largest recipient of Greenfield investment in terms of total value.* China still has more projects but India pulled in more in value. India is a fascinating place to watch. Twenty years ago, even ten years ago, people would compare China and India and predict which would grow and develop faster. China won that race easily. China might be over investing in infrastructure, but India invested far too little. And, India’s famous bureaucrats have hamstrung growth there for decades. Prime Minister Modi is trying to break the bureaucracy. It’s an intimidating, entangling challenge, but if he can succeed, then India may win the next few decades in a different way from how China won the last two. Even as we continue to eye India’s economy, sometime soon we’ll delve deeper into India’s pollution and environmental challenges. 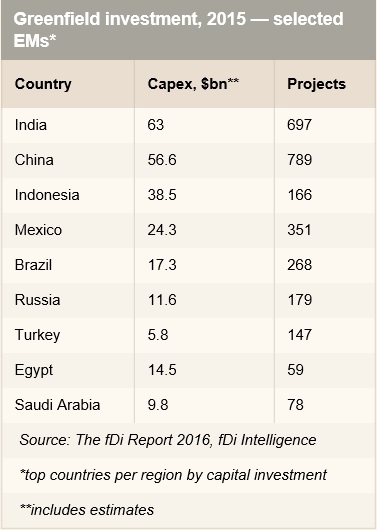 You Have Lost Control

America’s use of drones in Afghanistan have been controversial for a number of reasons. But that has not slowed down the use of them. In fact, last year marked the first time that more weapons were fired from drones than from traditional aircraft. And so far this year, “drone strikes account for 61% of attacks in Afghanistan.” The number was 5% in 2011, a mere five years ago. But we are not here to comment on military strategy, but to note that the world itself has indeed changed lots in the last 5 years. Countries do not have monopolies on advanced technology like they once did. Or at least the monopolies are short-lived nowadays. Five years ago, 11 countries were deploying drones. Today, at least 57 countries have and use drone technology. The spread and adoption of new technologies continues to accelerate.   Access to powerful technology is much more widespread. It reminds me of Moore’s Law of Mad Scientists: “The minimum IQ required to destroy the world drops by one point every 18 months.” Enjoy your afternoon!

Who is Working Part Time

The workforce is changing in recent years we’re told. There’s the so-called Gig economy full of Uber drivers, freelancers for hire and others. In addition, during and after the Great Recession data pointed to lots of underemployment. People who lost their jobs couldn’t find the same level of employment or in some cases had to rely on part-time work. In other cases, part-time work is just what people wanted. Which countries have the largest percentage of part-time workers? The Netherlands, by far, especially for women. Labor participation rates in the Netherlands are very different than in the E.U. as a whole, with 26.8% of Dutch men and 76.6% of Dutch women working less than 36 hours per week (which many in workaholic America would consider part time) as opposed to 8.7% of men and 32.2% of women in the E.U. as a whole working part-time. The full list is below for your pleasure and study when you’re not working full time. 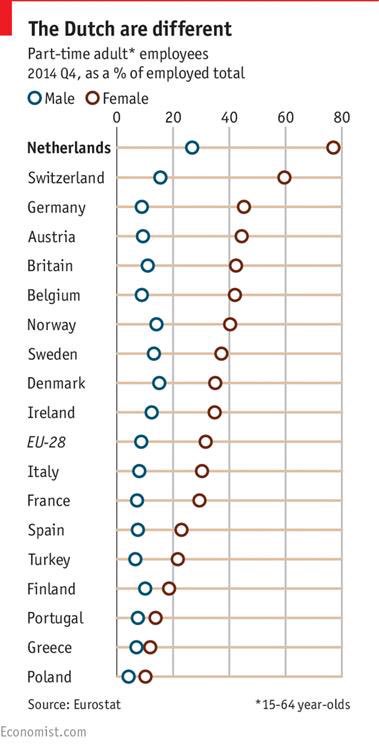 Confusing China, Peak Oil (Usage), Where are the Cynics Technology Democratization, Dual Citizenship and Where Your Clothes are Mad...
Scroll to top