The Broadway sensation Hamilton received a record 16 Tony nominations this week leaving the John Jay Society seething in resentment. All of this raises the question of which of today’s current policy and political figures will inspire musical tributes two centuries from now? We’ll take your suggestions even as we try to explain why you may want to hide your face, determine where the global citizens are and discover where your clothes are made. It’s this week’s International Need to Know, providing neither song nor dance as we try to make sense of this stage of a world in which we all play a part.

The Continued Democratization of Technology

Just last week we remarked on how technology spreads more quickly and is developed in more parts of the world than it was 30 years ago. Fresh evidence of that comes from Russia where big strides in facial recognition were recently made.  A Russian software developer named Andrey Mima claims he was able to use nothing other than photos of two women from 2010 to track them down. He inputted the photos into his perhaps inelegantly yet succinctly named software, Findface, and the software found the two women on Russia’s version of Facebook (calledVkontakte). The face recognizing algorithm was originally developed by a Russian start-up calledNTechLab. This small, new Russian company beat out Google and other big players in theUniversity of Washington’s MegaFace face recognition challenge. Put aside for a moment worries about privacy and the fact that there is a contest called “MegaFace” and understand that innovation and technological development happens all over the world nowadays. Such democratization of technology and its development will have a big impact on the world economy, security issues and poverty, to name just a few. Okay, now you can go back to worrying about the privacy implications (see the linked story for one example) of this particular technology while International Need to Know stays busy deleting all known photos of itself from the Internet.

If our music streaming service is informing us correctly, John Lennon once sang “Imagine there’s no countries, it isn’t hard to do.” For most people, it actually is pretty difficult to imagine. People think of themselves as Americans, or Canadians or Brazilians or any number of other nationalities. But there are indeed many who think of themselves as global citizens first as a new poll by Globescan for the BBC shows in the chart below. The poll was conducted in 18 countries across five continents. The results defy simple stereotypes. More people in China see themselves as global citizens than do Americans, Canadians or British. A few weeks ago, we noted the economic challenges in Spain so perhaps we should not be surprised that 45% of Spanish “strongly agree” that they see themselves more as a global citizen then a citizen of Spain. Of course, ask a Spaniard if they are a part of Real Madrid nation and the chart may blow up entirely. 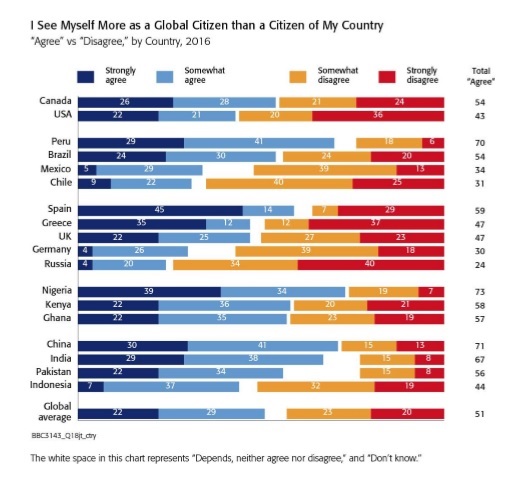 We probably all remember 15 years ago heading to our favorite clothing store and noticing that everything was made in China. Unless you joined a nudist colony, you were wearing clothing made from that ever fascinating, complicated country. Today, China still accounts for 41% of all apparel exports as you see in the chart below from the World Bank’s Stitches to Riches Report (Stiches to Riches sounds like a cleaned up Nicki Minaj lyric). But, as China diversified it’s economy into electronics manufacturing and other industries, apparel now only accounts for seven percent of China’s exports. China’s share of global apparel exports are likely to fall too as labor costs in China rise. The always stylishly attired INTN, is already seeing anecdotal evidence of this. Today, when shopping for new duds, the “Made in China” tag is not nearly as ubiquitous. Instead we see tags indicating Bangladesh, Vietnam and other countries as the source of the clothing. We often wonder if certain African countries may enter the picture in the future. Low labor costs in Africa combined with China’s investments in Africa seem like a winning combination for a future apparel industry.