Last night driving back to the worldwide headquarters of International Need to Know, traffic came to a complete halt. This is no longer an uncommon occurrence in this neck of the woods, even though it was after rush hour. We soon learned our delay was caused by a Beyoncé concert. But even Queen Bey was unable to prevent us from turning Lemonades into lemons and worrying about housing prices in China, despairing over endangered flora but ultimately brightening to electrifying news out of Japan. It’s this week’s International Need to Know, not needing to dope up like a Russian athlete to bring you the most important happenings of Beyon–er, our world.

Last week, we were working with some Chinese investors looking for ROI here in the Seattle area. While walking in a residential neighborhood on our way to a meeting, one of the investors asked, “How much does a house cost in Seattle?” It’s a curious question, kind of like asking how much do paintings cost. It depends, of course, on the house–how large, where it’s located, does it have a view, does it have an antique Rembrandt in the attic? Chinese are looking to place their money in “safe” investments overseas now that large returns are no longer guaranteed in-country. China’s economy is definitely slowing, as we’ve pointed out in this space. More evidence of the slowdown came this week when provincial growth rates were reported. Of 31 provinces, 25 reported a slowdown from 2015’s year-on-year growth and 14 are undershooting their expansion targets. And these are the official statistics. What is really going on at the province level may be worse. Housing data is also showing a slowdown, although not in Tier 1 cities, as the chart below shows. Tier 1 cities in China saw huge inflation through 2015. Tier 2 and Tier 3 cities? Not so much. Which brings us back to our Chinese investor’s question. How much does a house cost? Here in Seattle we see housing prices continue to rise. In fact, that worldwide headquarters of INTN that Beyoncé prevented us from reaching in a timely manner? A house kitty-corner from HQ recently sold for about 50% more than its Zillow value. Values here are being driven up by lack of inventory but also by Chinese and other outside investors buying into the market. Seattle is becoming a Tier 1 city. As the world urbanizes, Tier 1 cities around the globe are likely to continue to experience housing inflation…right up ’til the moment they don’t. More on China’s housing situation soon. 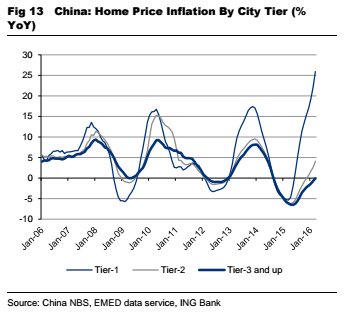 When worried about world encompassing environmental problems, photos of animals–the polar bear, or the Sumatran tiger or some other cute mammal or bird–are often used to make the point of how dire the situation is. But what about the cute fern or lonely lichen or other plants? Because as it turns out, far more plants are endangered than animals in our little world today. In fact, the International Union for Conservation of Nature claims that “there are almost as many threatened species of plants as fish, birds and mammals combined.” The flora may be in more trouble than we fauna which, of course, has implications for we fauna. 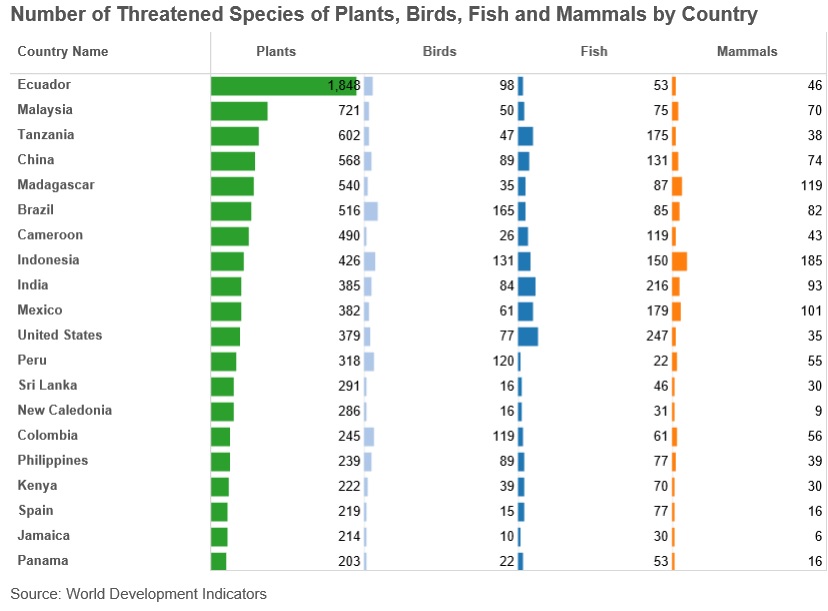 No, not their economy, though Japan’s economy surprisingly expanded by 1.7% in the first quarter, staving off recession worries. What we’re talking about is Japan’s robust electric car infrastructure. Japan now has more car charging stations than gas stations as you can see below courtesy of Forbes. Japan is now the proud home of 40,000 electric vehicle charging stations, more than four times the United States and now outnumbering the 34,000 Japanese gas stations. Nissan, with it’s electric Leaf, is helping to drive this infrastructure build-out. Of course, Japan’s geographic territory is much smaller than the United States, making it easier to develop its electric infrastructure. But this growing and large number of electric charging stations is indicative of the change that is coming to our auto infrastructure. Now the key question is how will Japan generate the electricity to power the cars? 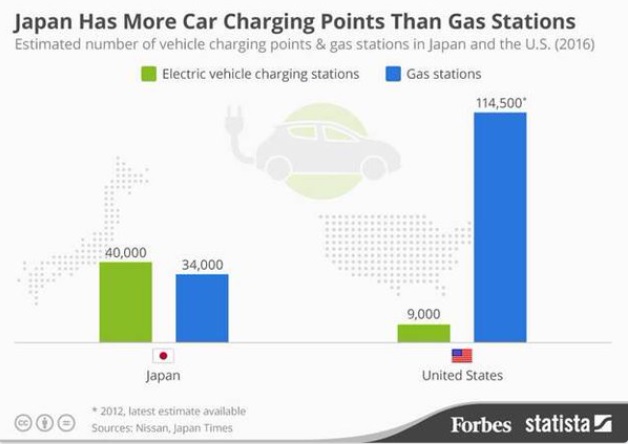