In 1977, when International Need to Know was but a mere lad, we attended the first Seattle Mariners baseball game ever in the concrete confines of the Kingdome. The Mariners lost that night and for much of the last 40 years have continued to lose in ways both conventional and confounding. So we are unaccustomed to the flurry of success in the first fourth of this season, including the barrage of runs last night and the walk-off home run the night before. But even adrift in a sea of victory, we still have enough wits about us to anticipate the roar of African Lions, chuckle at Donald Trump and Bernie Sanders’ worst nightmare and gaze with wonder at the latest innovation coming out of China. It’s this week’s International Need to Know, the weekly newsletter that even while looking in its basement for stray millennials, provides key information about the world for people of all ages.

We recently wondered in this space about Africa becoming a prime location for textiles.  Africa is generally ignored in the news unless the subject is disease, corruption or war.  And yet, Africa is large and diverse. And it’s been growing. After East Asia, it is the second-fastest growing economic region in the world.  On current trends, Africa will grow 3.7% this year. The African Development Bank tells us that growth rates in Africa rose on average by 2% during the 1980-90s but by 5% in 2001-14.The growth rate has slowed a bit in the last year and a half due to commodity-reliant African countries being hit by the fall in commodity prices, but the growth rate is still above other regions. The growth is highest in East Africa followed by West Africa and Central Africa. We all know about the urbanization taking place in China and other parts of Asia, but the same thing is happening in Africa, only faster (but so far without the robust infrastructure). Since 1995, the population living in cities in Africa has doubled. African countries have lots of challenges going forward but those that build out infrastructure, institute economic reforms and provide strong education, could become African Lions like the Asian Tigers of yesteryear.

Everyone knows the quote about history repeating itself (or if you don’t, you’re doomed to hear it again). Far less known is the notion that history likes to paint mustaches on us when we’re asleep.*  And, Vietnam offers a great example of it. President Obama is in Vietnam as we write, 40 years or so after America exited a war to stop Communism from spreading across southeast Asia. But, look at the poll below. Over 90 percent of Vietnamese say “most people are better off in a free market economy.” An equal number say trade is good. And 75 percent of the population have favorable views of the United States. Of course, the vast majority of Vietnamese were born after the U.S.-Vietnam war ended (go to Vietnam and ask about the war and they will ask, “which one?” There have been a number before and since the U.S. war). Nearly 70 percent of Vietnamese are under the age of 35. And with low labor costs, Vietnam stands to gain in world trade. When I was last in Vietnam, it was remarkable how many of the business people were counting on the Trans Pacific Partnership trade agreement to improve their economy. So, there’s reasons why Vietnamese are so market, trade and American friendly. Even so, the poll results are interesting and perhaps not so predictable from an Embassy rooftop in 1975. 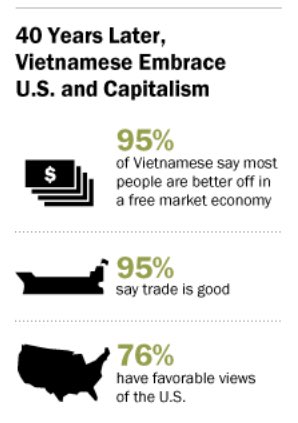 We’ve given China bears lots of space in recent INTN editions but China is complicated and as we noted a number of months ago, it is an innovative place despite stereotypes to the contrary. So we focus this week on one of those cool innovations, the Straddle Bus. The idea was first broached in Shenzhen (one of the most entrepreneurial areas of China) a few years ago and now a Beijing company has picked up the baton and is building a life-sized model for Changzhou. They expect to start testing it this summer. Essentially the straddle bus “will run along a fixed route, and its passenger compartment spans the width of two traffic lanes.” Cars will be able to drive underneath it, thus alleviating traffic congestion. Passengers will load onto the bus at designated elevator stations. It will have a capacity of 1200 passengers, again reminding us of the scale of China. The engineers claim the costs are 16% of the cost of building a subway. Regardless, it’s very cool. Check out the video demonstration. 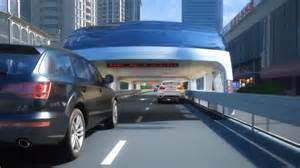