This week International Need to Know attended a discussion regarding International Conflict on a Cyber Battlefield featuring the author Adam Segal. There was much angst expressed in the audience at the vulnerabilities in our computer systems and how at risk we are to being hacked. We would give you more details but it was an off-the record discussion. Of course, our smartphones were probably hacked and the discussion immediately leaked to Gawker.com. But even as we madly strengthen our passwords and ponder how to convince Peter Thiel to fund our lawsuit against David Stern, we still examine clean energy strides in China, worry about why people don’t get anything done at work anymore, and eye where cigarette smoking is hot. It’s this week’s International Need to Know, the weekly newsletter that knocks down three pointers on important information around the world.

China bears continue to circle our campsite but we ward them off for at least one more week as we look at CO2 emissions in China, with the caveat that there is a bear component to it. You may remember, if you pay attention to such things (which is our job here at INTN) that back in 2014, China announced “ambitious” carbon emission reduction targets. In fact, their aim was to limit coal growth use to 3% per year. They so far are easily achieving that goal with coal use actually decreasing in the last year. Now we can definitely view this as another underlying sign that China’s economy is slowing down and not growing at the alleged 6.7% growth rate (back bears, back!). But, there are also signs that growth in renewable energy is also playing a big part. In the graph below you can see non-fossil fuel energy sources (solar and wind mostly) are growing. You won’t be surprised that we believe the dotted projection line is underestimating the future growth of these energy sources as solar installations are growing at an exponential rate. The current total installed capacity of wind and solar reached 180GW in 2015 (the target was 140GW) .Even current installation rates mean that the existing 2020 target of 300GW will be reached by mid-2018, and you can bet that installation rates will increase over the next two years (go ahead, book your flight to Vegas). China also aims to have coal’s share of energy use fall to 62% by 2020. It’s already down to 63%, falling 1% every year since 2010, so the 62% target is likely to be reached before the 2020 goal. The energy world is changing faster than most realize, including in the world’s largest polluter. 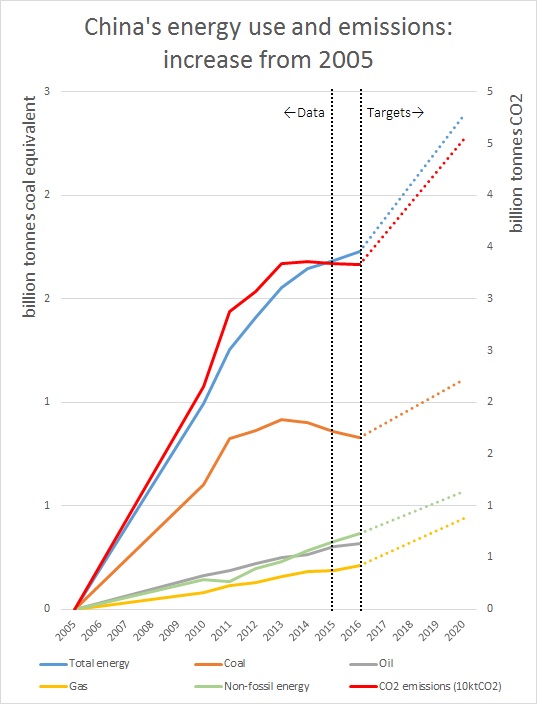 There are two ways to increase GDP. One is for your working-age population to increase so there are more people working and producing more goods and services. The second is for those workers to produce more than they previously did thanks to improved technology and business processes. As we noted in this space last month, for most countries, other than Africa and India, the working age population is decreasing or about to decrease. So that leaves increasing productivity as the way our world will boost GDP growth rates. Unfortunately, productivity growth rates are increasing at a much smaller rate than usual. There’s been lots of talk lately about U.S. productivity rates lagging but it’s not just in America. The whole world is experiencing a productivity slowdown. As you see in the OECD chart below, productivity is increasing at a slower rate in Japan, Korea, Germany and the UK, not just in the United States.  Automation may change that in future years, with good consequences for GDP but perhaps bad consequences otherwise, at least in the short run.  But the question is what has been going on the last decade that has so reduced productivity gains? Have the technology advances in recent years been ones that do not boost productivity unlike in previous decades?  If economists weren’t so busy watching cat videos on the Internet maybe we’d know the answer. 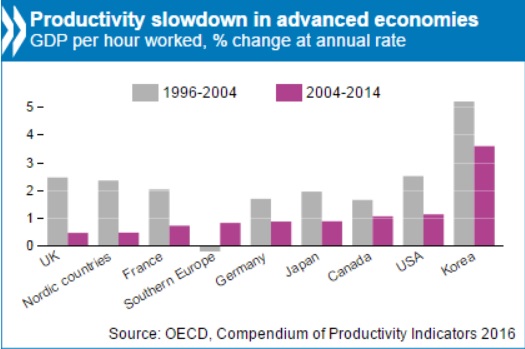 Where is Smoking Hot?

One of modern’s life’s great pleasures is being able to go to a bar or a concert and not have to come home smelling like cigarette smoke. I once half-joked during the anti-smoking law debates that I’d rather the person at the table next to me in a restaurant was shooting up heroin rather than smoking a cigarette–the former doesn’t particularly affect me but the latter’s second hand smoke certainly does. But, there are still more than 1 billion smokers in the world, the majority of them men.  And, in 27 countries, smoking is actually on the increase. They are mostly countries in the Middle East and Africa. Take a deep, clean breath and see the full list below. 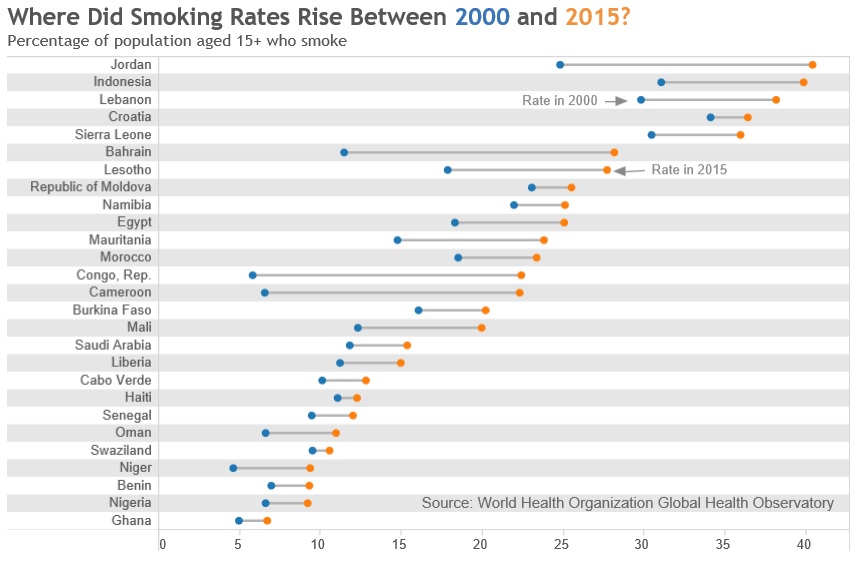