Not too long after eating shrimp and grits this week, we saw that obesity rates are again up in the United States. But bigger news than how large Americans are is that you can now access thearchives of International Need to Know at the Gittes Global website. So skip that donut (beignets are better anyway) and peruse the wit and wisdom of INTN at your leisure. But even the launch of a new website did not prevent us from examining Indian fertility rates, what the fall in commodity prices has done to exporters and where the meanest tourists are. It’s this week’s International Need to Know, providing all the international news that fits in our expanded waist band.

The Turning of the Indian Screw

India is large. It is the second most populous nation in the world, trailing China by only 40 million people. We’ve pointed out that the world’s working-age population is getting smaller except in Africa and India. But things are changing in India. The total fertility rate (TFR) is now atreplacement level of 2.3 (in developed countries replacement level is 2.1 but India’s higher infant mortality rate and skewed gender ratio makes 2.3 replacement level).  In rural areas TFR is 2.5 but in the urban parts of India, TFR is down to 1.8.  Since India continues to urbanize, it is likely that soon India will be below replacement level which means over time we will see the graying of India just as Grecian Formula is being dabbed on so many other parts of the world. This won’t happen for a few years but when it does it will have the same slowing impact on GDP as it has in other parts of the world. It likely also implies that the world’s population, which the UN currently predicts to peak at 11.2 billion by the end of the century (how many sentient robots will there be by then? Will the UN keep track of robotic demographics? Will they have a seat at the Security Council table?), will peak at a lower level. For the next 25 years or so India’s population will continue to grow because death rates are falling which compensates for falling birth rates, but that larger population will skew older. This will be beneficial in some ways and present challenges in others. Demography is, if not destiny, certainly a helpful, enlightening guide.

The drop in commodity prices has affected economies all over the world, but its most devastating effects have been on large commodity exporters. As you see in the chart below, commodity exporters’ GDP growth rates have trended down the last two years right in line with the decline in commodity prices. This has led to credit growth in commodity exporting markets. According to the World Bank, “…credit growth in commodity-exporting EMDE (EMDE is World Bank speak for “emerging markets and developing economies”) has been rapid, near the pace and levels of credit-to-GDP ratios associated with past credit booms.” The implication is that this credit boom could lead to a credit bust if credit growth continues unabated.  All of this, of course, is connected to decreasing demand in China. China’s economic transition and whether other emerging markets pick up the growth slack, will have profound impacts on other countries’ economies. Will the policy reactions to decreased commodity prices lead to financial crisis in a host of commodity exporting countries? We ponder the question while enjoying a cheap bowl of Cheerios. 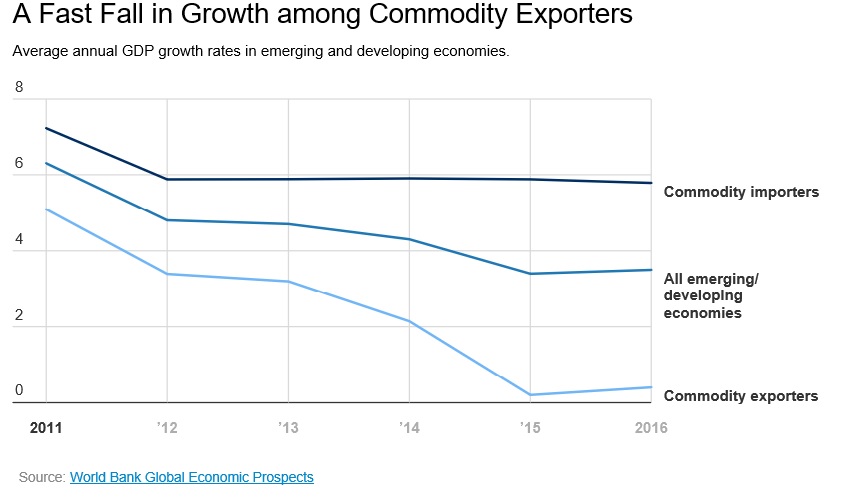 We all know ugly tourists. In the 1950s Americans were accused of being ugly tourists, later it was Germans and then Japanese and recently it is the Chinese being so accused. It comes with the territory of becoming a prosperous country whose citizens start traveling the world, bringing their cultural peccadillos with them.  But who are the meanest tourists? Priceonomics.com dives into the data to tell us that Koreans are. South, not North (presumably North Koreans are not doing too much touring). The good folks at Priceonomics looked at data of online reviews of tourism and travel activities and found Koreans were more likely than other nationalities to post bad reviews. Of course, even Koreans were fairly positive overall with only 18% of their reviews of tourism activities being unfavorable. If you have an Airbnb rental, run a museum or some other tourist attraction, lure in the apparently easy-to-please Czechs, they give the most favorable reviews. 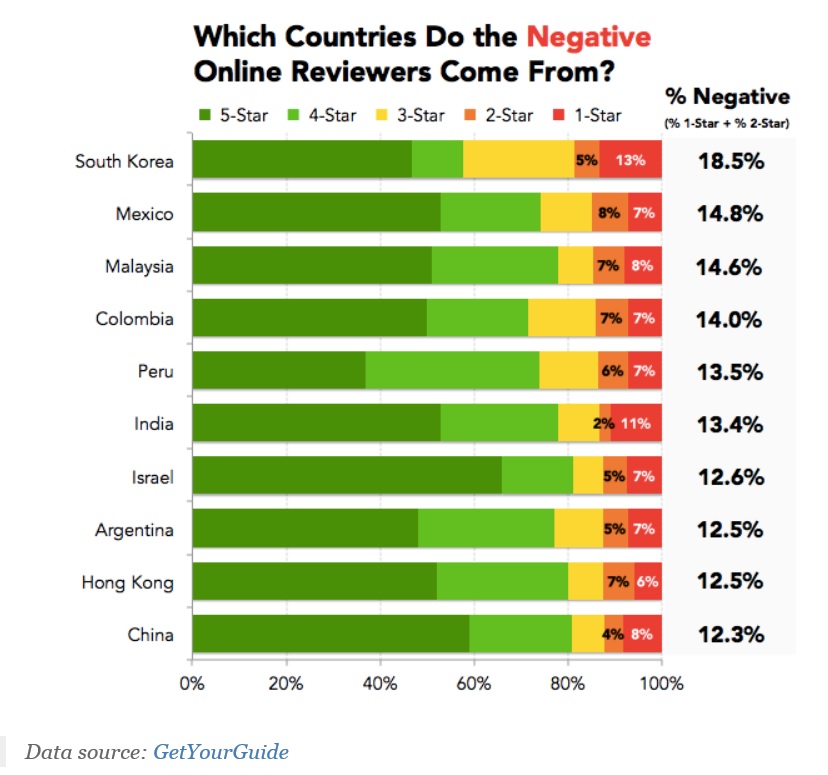