Life rhymes in coincidences, hums in ironies and occasionally crashes the hi-hat cymbal with karma. We were well aware of this yesterday while driving and listening to the radio news tell us of Ford’s announcement that they will release a fully driverless car without a steering wheel or pedals in five years for use in ride sharing fleets. Even as we listened and noted that Delphi will beat Ford to the punch in Singapore in 2019, a taxi in front of us careened across two lanes in order to make a sudden right turn. We have great empathy for the millions who will be put out of work by this rapidly advancing technology but will gladly see that particular taxi driver off the road. Even so, we would swerve across a busy six-lane highway to tell you about democracy’s difficulty in getting a date, remind you even so that the world is getting better and examine whose genomes are being sequenced. It’s this week’s International Need to Know, striving to be the Michael Phelps/Katie Ledecky of international information.

The slow arc of history towards liberalized democracies seems to have taken an unfortunate bend in recent years. Twenty years ago, it seemed inevitable that we were moving towards a world full of such political systems. But a coup in Turkey, the rise of authoritarian parties in a number of countries and the slow pace of democratic reform in others, has led a number of people to express concern about the path of our world. So we were curious what people think about democracy nowadays and it turns out there are indeed some worrying trends in people’s attitudes. Via Timothy Taylor we were pointed to The Democratic Disconnect which looks at surveys over the years of people’s views on democracy. Fewer people today in Europe (and the U.S.) have a positive view of what Churchill called the worst political system save all others. And it’s younger folks and rich people who most skew against democracy. In the Netherlands for example, “Only one in three Dutch millennials accords maximal importance to living in a democracy.” And it’s not just that a rising number of people are dismissive of democracy but also that growing numbers of people favor authoritarian rule: “In Europe in 1995, 6 percent of high-income earners born since 1970 favored the possibility of “army rule”; today, 17 percent of young upper-income Europeans favor it*.” So I guess young, rich people are our most likely future brown shirts. Obviously we need an AI to rule over us all and tell us to be democratic. Er, uh, or something like that. 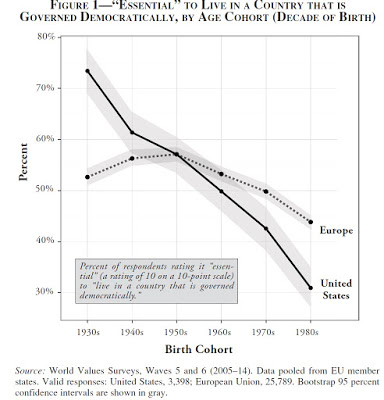 *I’m still diving into the data for countries like China and India. More, perhaps, on those later.

And Now for Some Good News
Perhaps we should leaven the news of people’s increasing appetite for authoritarianism with a longer view of how well the world is doing over all. The Human Development Index (HDI) measures key dimensions of human progress over time. It includes life expectancy, health outcomes, literacy rates and access to education and GDP growth. The better a country does at these things the higher their HDI score. It purposely looks not just at economic growth but at a variety of factors that make people healthy, wealthy and wise. As you can see in the chart below, the trend for all regions is up and has been since 1870 (a very good year for wine and human development which may not be a coincidence). The only blip during that time period is Eastern Europe and Russia from about 1970 to 2000. But even they are up in the last 15 years. This two century good trend is something we may want to remind all those wanting to tear apart our world and its institutions. 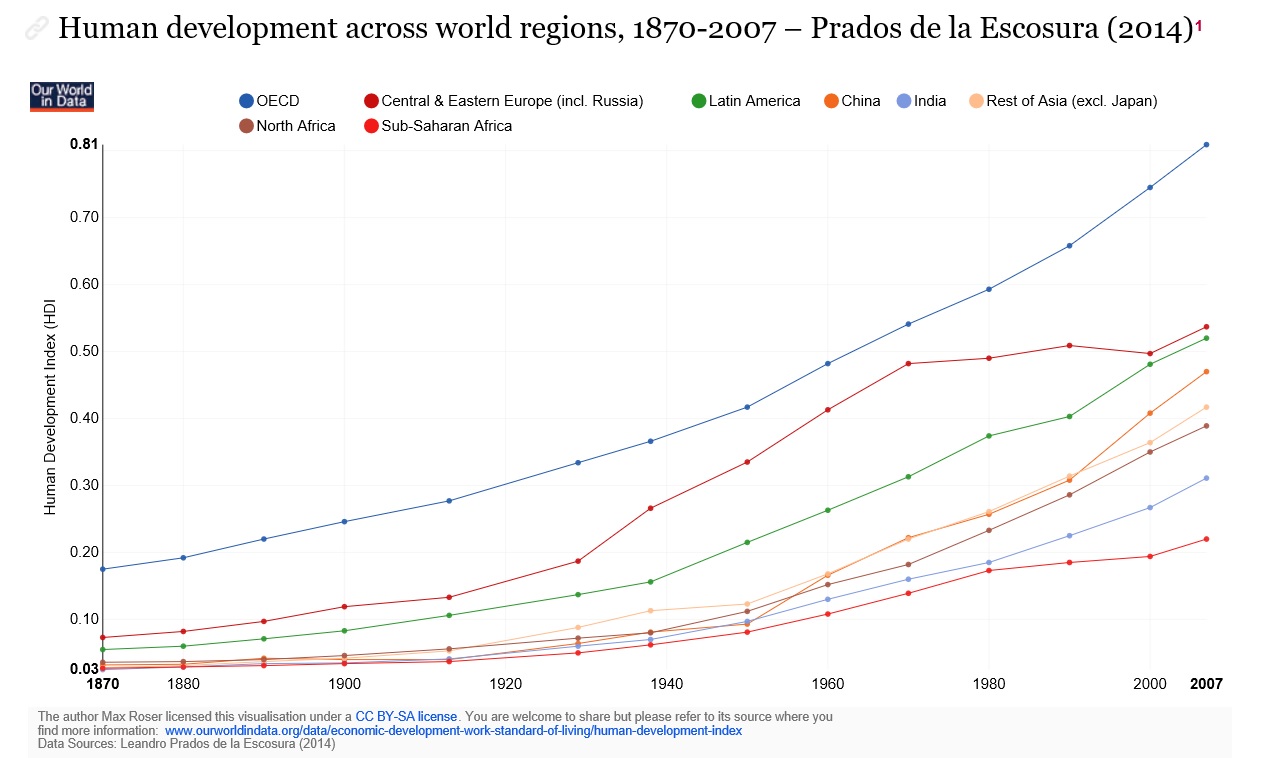 The cost to sequence genomes has come down dramatically in the last decade, falling to around US$1000. In fact, we expect over the next five years, it will become affordable for most Americans and other high income countries’ populations to have their genomes sequenced. A prediction far more reliable than an American swimmer’s story of being robbed in Rio. Putting aside for the moment how useful it is to sequence genomes to improve health outcomes, we should note that in many parts of the world it is not affordable. As you can see in the chart below, by far Africa has the least number of genome sequencing centers. The United States, China, and parts of Europe lead the way. Given the seeming importance in diversity of samples, developing more genomic efforts in under-utilized countries will be important. And if costs keep coming down dramatically as expected, affordable.

Brazil’s Dirty Water, China’s Grand Ambitions and Who is Using the... Automation’s Effect on Developing Countries, Dementia around the World...
Scroll to top