We read earlier this week that seeing live music reduces your stress levels. That’s according to a new study from the Imperial College of London. Levels of the stress hormones cortisol and cortisone both decreased in the volunteers who attended concerts as part of the research. The study also says, “It is of note that none of these biological changes were associated with age, musical experience or familiarity with the music being performed.” Apparently the study only had volunteers attend classical musical concerts so no word on whether seeing Metallica, Jurassic 5 orHardwell will calm our savage beasts. But even as we stationed a classical cellist near our keyboards, we still became stressed at the effect automation may be having on developing countries, worry about where dementia is most prevalent but we remain calm, cool and collected about where in the wild millionaires are to be found. It’s this week’s International Need to Know, keeping a constant drum beat on the strange rhythms of a complicated world.

As we are fond to point out, the last forty years have been remarkably good for we humans. More people have risen out of poverty during that time period than at any other time in history, both in raw numbers and in percentage of the population. The rapid development of South Korea, Taiwan, Singapore, China and India has alleviated poverty and pain for hundreds of millions of people. The hope is additional countries will follow suit. But will automation make that more difficult to do in the future?  A new study by the International Labor Organization (ILO) paints some red-alarm shades of worry on the matter. The ILO analyzed five ASEAN countries–Cambodia, Indonesia, the Philippines, Thailand and Vietnam–which account for 80% of the ASEAN countries workforce, to determine which sectors are most at risk for automation. They found that “approximately 56 per cent of all employment in the ASEAN-5 is at high risk of displacement due to technology over the next decade or two.” For Cambodia, which because of China’s rising labor rates, has become a large textile hub, the ILO already sees automation endangering jobs: “…close to half a million sewing machine operators face a high automation risk.” As Tyler Cowen points out in a new eBook, “At a growth rate of five percent per annum, it takes just over eighty years for a country to move from a per capita income of $500 to a per capita income of $25,000.” We need additional countries to achieve the rapid growth that led to the large alleviation of poverty the last 30 years. But will automation make that more difficult? While we wait to find out, check out Asian country labor costs below: 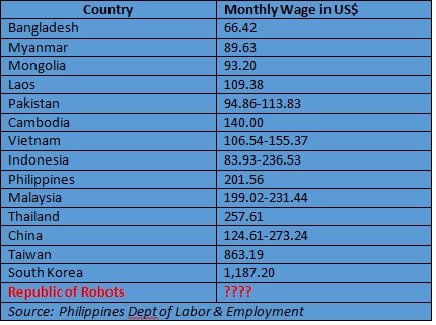 Live Long and Don’t Get Dementia

We were perusing data on which countries have the highest rates of dementia (What? What do you do for fun and recreation?). They are unsurprisingly all highly developed countries whose populations have lengthy life spans. But, they do not correlate completely with life expectancy. As you can see below, only three countries (those shaded in yellow) are in the top ten for both dementia rates and life expectancy. Of course, all of the countries with the top ten highest dementia rates are in the top 40 of countries with the highest life expectancy–the United States is the lowest, ranked 31st for life expectancy. Also of somewhat interest, all the countries in the top ten rates of dementia, save the geographically diverse United States, are countries located fairly far north. Not until Cuba, which has the 15th highest rate of dementia, do we find a country that is not fairly far north. Chile and Uruguay are 16th and 17th but they are somewhat south though not as far south as the top ten are north (in Chile’s case it is north and south but the main population center is about mid-way). Thus ends our unscientific meanderings into world health. We await our NIH grant where we can control for diet, genetic diversity and other factors.

Who Wants to be a Millionaire?

Many months ago we pointed out where the billionaires are. But that is a particularly rare species, surviving in the wild through luck, circumstances and, of course, often hard work and a good idea. But where are the millionaires? No surprise, the U.S. is home to the largest percentage of the world’s millionaires with a whopping 46%. Next up is the UK, Japan, France, Germany and then comes China. A pretty remarkable feat for China, all accomplished in the last 35 years. Scan the list below with whatever greed and envy you care to bring to the table, er, pie chart. 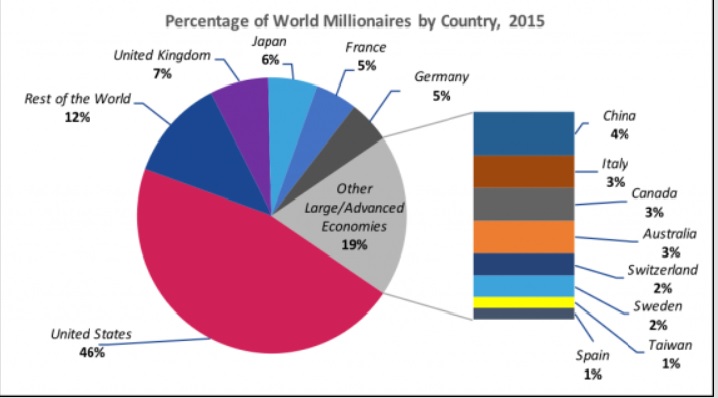