Late Monday night we stumbled upon a story that implied that the organization, Search for Extraterrestrial Intelligence (SETI), believed we have found signs of life on a planet only 95 light years away. A signal detected by some Russian scientists exhibited signs of being transmitted intentionally and SETI is now monitoring the planet. Our immediate thought was, wow, this is the biggest news of the century. Then we thought, crap, now we’re going to have to build a wall around earth to keep out the illegal aliens. But upon further reading, and fortunately for interstellar defense budgets, it is extremely unlikely that this relatively nearby planet contains life. So we remain focused for the moment on the strange life forms of our own planet, particularly the advent of autonomous ships, China’s so-called corporate debt and the outsized effect cities have on countries’ economies. It’s this week’s International Need to Know, miraculously pulling relevant information out of the black hole that is our data rich world.

If I Had a Boat

Now that autonomous cars are so old-hat that even Pittsburgh has them, we turn, as so many old men* have before, to the sea. Across the pond we discover that Rolls Royce is working with universities and other companies to develop an autonomous cargo ship. A press release from Rolls Royce announces that the company “is testing sensor arrays in a range of operating and climatic conditions in Finland and has created a simulated autonomous ship control system.” Like self-driving cars, these ships would be equipped with infrared detectors, high-resolution cameras and laser sensors. Rolls Royce will begin with remote controlled ships, claiming “We will see a remote controlled ship in commercial use by the end of the decade.” From there, they will develop completely self-driving boats. The big challenge for autonomous ships has been lack of high speed bandwidth to transmit the massive amounts of data needed to guide the ships. But, new satellite technology is making fast affordable bandwidth possible. Rolls Royce believes autonomous ships could reduce costs by 22%. So all the cargo on the ships can be sold at a much lower cost to customers who won’t have any money to buy these goods because they lost their jobs to autonomous cars, boats and other vehicles. 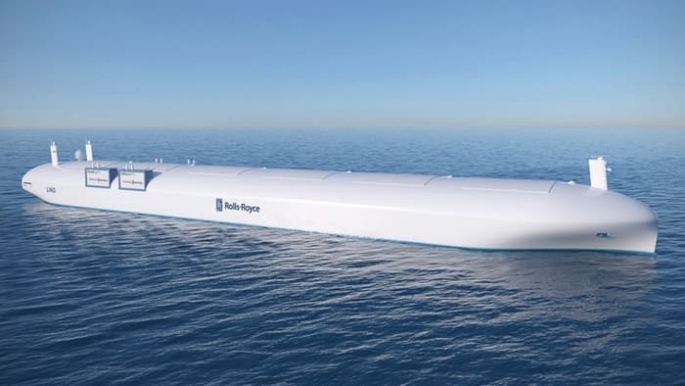 *Not that we’re copping to being old, mind you.

Ahh, China. Complicated, large, ever changing. We have seen a number of people recently ringing alarms over China’s corporate debt. We like to clang that bell of worry as much as the next person and will even note that China’s corporate debt is now 145% of GDP. But, Chinese corporate debt isn’t your average country’s corporate debt. More than half (55%) is attributable to state-owned enterprises so in a sense this is government debt not corporate debt. David Lipton of the IMF notes that SOE’s only account for 22% of economic output. For the most part, these SOEs represent the “old” Chinese economy. China is attempting to transition from a manufacturing export economy to a more high tech, services economy. But it also wants to maintain high rates of growth (China continues to claim a 6.7% growth rate this year). To do that they are pumping credit into the economy and propping up the SOEs to prevent massive job losses. The worry is that more credit is now needed to achieve the same levels of GDP growth. And, of course, they are doing this partly by preserving inefficient, large companies. Yesterday, China announced the latest Purchasing Manager Index (PMI) figures (see chart below). The index rose for large companies (many of which are SOEs) but for small and medium size companies, it decreased. Where this credit pumping, SOE backing will ultimately lead, no one knows, probably not even those in charge of China. But, the rest of us can humbly speculate. 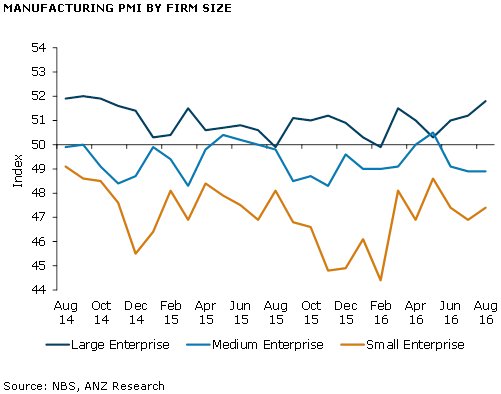 When the City is the Economy

We are in the midst of the great urbanization of our world. For the first time in history, more humans live in cities than in rural areas. Studies have shown that the United States economy is organized around metro regions. But in a few countries, the largest cities are essentially the economies of the country. Oslo, for example, accounted for nearly 90% of Norway’s GDP growth from 2000 to 2013. Copenhagen was responsible for three-fourths of the economic growth in Denmark and Santiago drove half the growth in Chile. These are all relatively smaller population countries where a large share of the people have congregated in these large urban areas. But even though these urban areas make up between 22% and 36% of their countries’ respective populations, their economic impact is still outsized. Tokyo, which believe it or not, is home to 25% of the Japanese population, accounted for 38% of Japan’s economic growth. This is still out of proportion to the size of its population but not to the extent of these other cities. At any rate, for the foreseeable future, cities rule. 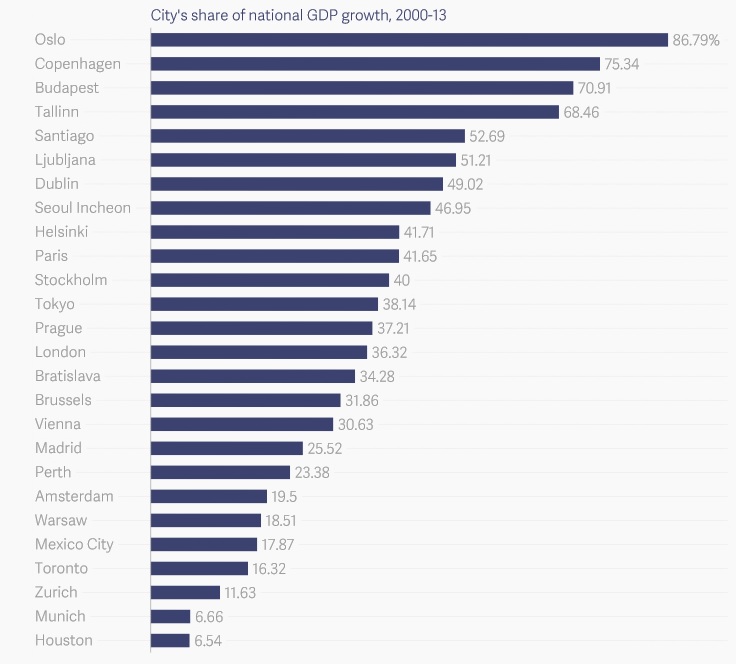