Here at INTN worldwide headquarters, we romanticize beginnings. The evolution of jazz in early 20th century New Orleans is an almost mythical time for us, as are the Sun Studio recordings of the early 1950s. So it is not a surprise that we are a big fan of The Get Down, the new Netflix show that fancifully tells the story of the beginnings of hip hop in 1970s NYC. One of our fondest memories as a youngster is visiting our grandparents on the lower eastside of Manhattan and being allowed at the end of the day to pull the security gate down on their children’s shoe store. The five boroughs back then also had a mythical feel, full of noise, grime, crime, fantastical creatures and above all, creativity. New York is safer and cleaner nowadays but not nearly as interesting. Even as we speculate that somewhere, someplace a new musical or cultural moment is being born today (probably either in an impoverished city overseas or in a down and out suburb of America) we ponder on Asia’s recent rise out of poverty, gaze again at China’s state owned enterprises and at the same time worry about Chinese productivity.  It’s this week’s International Need to Know, using our digital crayon to find the get down on international happenings.

Asia’s Rise Out of Poverty…

Via Ian Bremmer, we recently saw the graph below from the Harvard Business Review(HBR) showing the amazing income gains of the Asian middle class. As Branko Milonovic of HBR notes, “The ‘winners’ were the middle and upper classes of the relatively poor Asian countries and the global top 1%.” But the relative “losers”, at least for the years 1998-2011, were lower and middle income percentiles in the already rich countries. The researchers also note that, “It’s also the first time that global inequality has declined in the past two hundred years.” They calculate that the global Gini number (a measure of inequality—in our estimation a very crude measure) decreased to 64 from 69 (but not 867-5309–wait, Gini, not Jenny). This is an underreported phenomenon: income inequality has gone up within many countries but for the world as a whole, income inequality is down. But, the Harvard Business Review takes this one step further, believing increases in Asian incomes must occur at the expense of Western incomes: “If we then visualize the world over the next 30-50 years, in which other, even poorer countries, become the ‘new Chinas,’ the stagnation of middle-class incomes in the rich countries may continue.” But there are many roads, highways and even back alleys to prosperity. Most need not be lined with western stagnation. Today’s future has very different starting conditions than the last two decades and so the path forward will lead in a different direction. As the investment advisors say, even while selling swampland in Florida (or southern China), past performance is not an indicator of future results.

No sooner do we write last week that China’s corporate debt is in many ways government debt because state owned enterprises account for more than 50% of such liabilities, than Fortunemagazine comes out with their list of the 500 largest companies (ranked by revenue) and lo and behold it trumpets that China now has more than 100 companies on the list. Three of these are in the top ten and every single one of them is a SOE—China National Petroleum, State Grid and Sinopec Group. I expect this top ten list to be volatile, partly because the Fortune 500 is volatile(the Global 500 likely even more so) and partly because China is changing so quickly that so too will its companies on this list. We live in a Ferris Bueller world, if you don’t stop and look around every once in a while, you’ll miss it. Many of the companies on this list will disappear soon like Cameron’s father’s Ferrari. 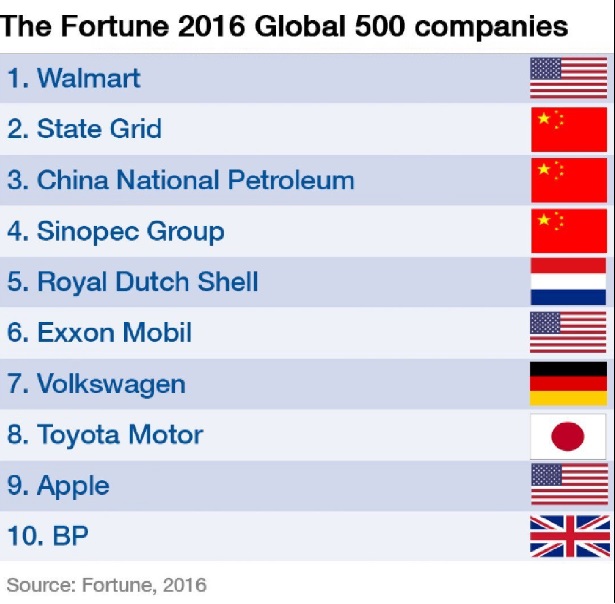 The World is Doing Nothing

A number of months ago we noted the worldwide decrease in productivity. The chart we posted showed slowdowns in productivity around the world but did not include China. However, China’s productivity growth, while still above Europe’s, Japan’s, Korea’s and the U.S., is also steadily decreasing, now down to 6.6%. It peaked at 13% growth in 2007 and has gone down ever since. Are Chinese workers just as susceptible to cat videos on the Internet as the rest of us? As we noted in the previous post, the worldwide decrease in productivity is worrisome for the prospects of future GDP growth. GDP can only grow through increased productivity or working age population growth (the latter is decreasing in most countries save Africa and India). More worrisome for China, though their productivity and economic growth has been extraordinary the last 25 years, they have still not caught up to developed countries (see second chart below) or even to the world average. Each Chinese worker is producing far less than a Japanese, European or American, even as the costs of Chinese labor rises, leading to more automation. As we saw above, the Harvard Business Review is worried about Asian workers’ gains causing western income stagnation. The story is likely to be more complicated than that. As always, we await the next chapter eagerly but also with a bit of trepidation. 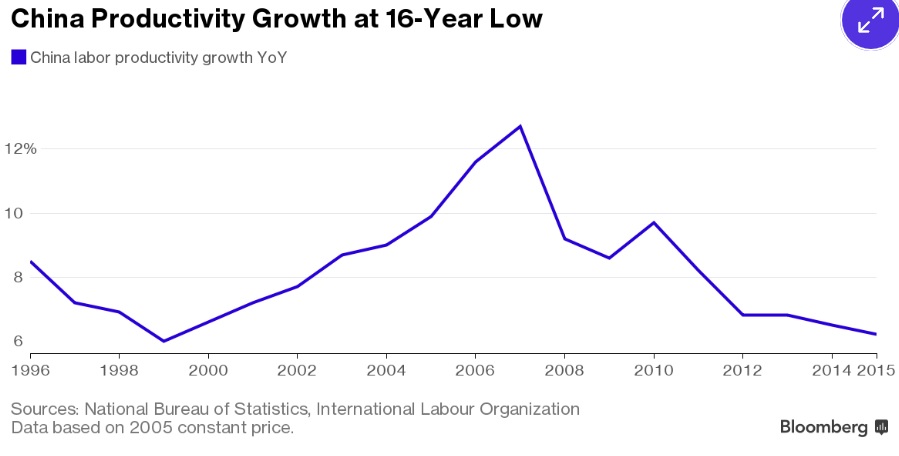 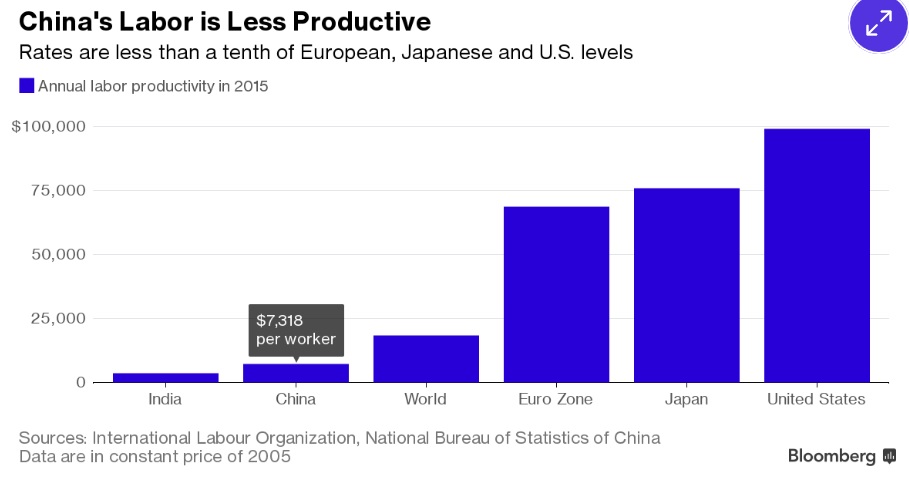 Autonomous Ships, China’s Corporate Debt and Cities Domination of Eco... More Evidence of Peak Oil Usage, Who is Retiring and what is the most popular...
Scroll to top