With the political landscape looking Dune-like to many and as we here at INTN increasingly worry that we will not witness the Seattle Mariners in the World Series in our lifetime (a certain shortstop and first baseman are on our list–that list is long and extensive with not nearly enough repercussions), it is always helpful to step back and get a little perspective about our world. Our species has been around for but a blink of an eye as illustrated nicely by the blogger, Jason Kottke, who publicized the concept of The Great Span. This is the idea that it is easy to connect two historical events or figures across large swathes of history, illustrating just how short human history is. For example, “two empires [Roman & Ottoman] spanned the entire gap from Jesus to Babe Ruth. Three civil war widows were alive in the 2000s. President John Tyler’s grandson is still alive.” So worry not too much about current events, today is but a flash in the expanse of time and space. Nonetheless, the brevity of human existence leads us to delve into how to power electric vehicles in Europe, discover where the largest airports are and gape in astonishment at where women executives rule. It’s this week’s International Need to Know, remembering that Vin Scully was announcing when Connie Mack was still manager, even as we pass on international wisdom in nanoseconds (relatively speaking) of time.

For ten years, from 1989 to 1999, the Electric Slide was the number one dance in the world. If more evidence is needed for both the agony and the ecstasy of the 90s, you will not get it here. We dance our own electric slide examining a new report from the European Environment Agency (EEA) about the rise of electric cars and the new infrastructure required to support them. The EEA examines two scenarios for the year 2050, one in which half of cars in the EU are electric and one in which 80% are electric. Either scenario should be good news, right? But the agency rightly points out that an increase in the use of electric cars does not help the environment unless that electricity is generated by renewable resources. Under Europe’s current energy infrastructure, there would be a net reduction of CO2 emissions (see chart below) and for some other pollutants. But, because cars emit very little sulphur dioxide, there would actually be a net increase in 2050 of this pollutant unless the electricity for the vehicles is not generated by fossil fuels. Fortunately, as we’ve pointed out previously, thanks to advances in solar power generation and storage, we are likely to no longer need fossil fuels to a large degree long before 2050 (probably by 2030).  It’s electric, boogie woogie woogie.

Come Fly With Me

There’s a reason why Boeing and Airbus eye China and the rest of the Asia Pacific region like a seven-footer seated in coach greedily eyes first class. Thar’s gold in them there skies. Airports Council International released their latest data on who and what is flying from where. The Asia Pacific region continues to be the largest air passenger market with 2.46 billion passengers, an 8.6% increase over the previous year. But as fast as the Asia Pacific traveling market is growing, the Middle East is actually the fastest growing region with a 9.6% increase (though far few passengers overall–334 million). Of course, the Middle East market is benefitting from Emirates Airlines efforts to successfully make Dubai an international airport hub–Dubai is now the second-largest international airport as measured by international passenger traffic. One worrisome sign in the data is the relatively modest growth in air cargo (2.6%), another sign of the slowdown in international trade we noted earlier this year.

Where the Women Executives are

The United States may, or may not, elect a woman president this year. If we do, we’d be catching up to other countries, many of which have long ago elected female leaders. The United States is not only behind other parts of the world in electing a woman president but is also lagging behind some countries on the number of women business executives. You may be surprised to learn that Russia leads the world in the percentage of women in senior roles in business, coming in at 45 percent. In fact, Eastern Europe as a whole does well with 35% of senior roles held by women. In the United States, 23% of women hold senior roles in business. China is at 30%. Maybe in the future a crazy, loud-mouthed businesswoman can run for president. 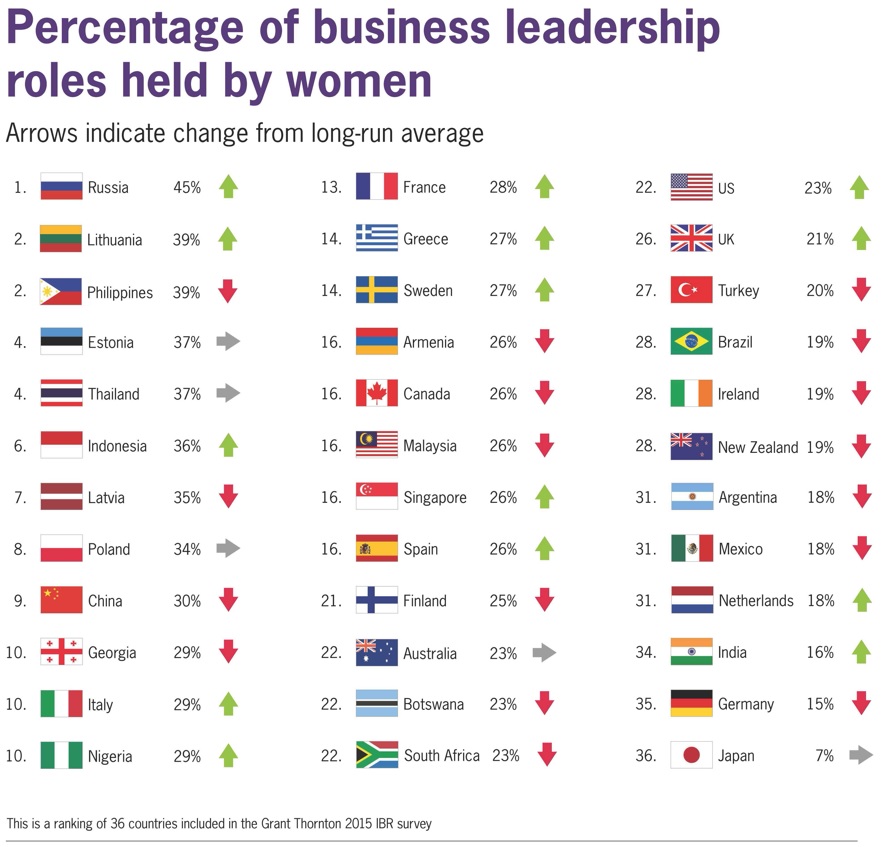 Refugees, Quantum Computers and China’s Box Office Rise of the Global Middle Class, Creative Destruction and Immigrants to the...
Scroll to top