In the space of less than 24 hours, we talked with both billionaire Paul Allen and rock icon Bruce Springsteen. We thanked them both for their contributions to our life and to society. A day or so later we talked with a middle-aged woman named Yvonne who has settled in on a corner two blocks from the worldwide INTN headquarters. Her new lodgings are modest with only a large umbrella and some plastic bags to protect her from the elements. We expressed our concern for her and asked if there was anything we could do to help. In perfect Queen’s English and diction out of a PBS Masterpiece Theater show (which threw us for a loop and upended our stereotypes), she informed us her house is up the street but she had settled here because of the people who were encamped at her house waiting to travel to their “destination.” We did not know what to do with this information nor how to help this unfortunate soul. Her problems and challenges are well beyond our expertise and experience. If you have ideas of how we can help, we welcome them. Perhaps she will not end up like Paul Allen and Bruce Springsteen but we would dearly like to get her to somewhere better than her current physical and psychological setting. But billionaires, rock stars and Yvonne did not keep us from applauding the rise of the global middle class, worrying about the lack of new companies and nodding at the role immigrants play in entrepreneurship. It’s this week’s International Need to Know, taking us on an international journey to enlightened destinations.

Rise of the Global Middle Class

Even during the height of the global financial crisis, we traveled lots internationally for work. We were struck that planes were full and there were no tables available at the restaurants in the cities we traveled to. Lots of people were and are hurting but large numbers have entered the middle class in recent years and you see them in museums, tourist sites and elsewhere around the world. It is a sign of global progress, even if it has made touring and traveling more challenging. Allianz’s latest Global Wealth Report tells us that “…in recent years, more and more people, almost 600 million in total, have achieved promotion to the middle wealth class.” Of the 50 countries Allianz monitors in North America, Europe, Asia and Latin America, the middle wealth class share of the overall population climbed from 10% to about 20%. Further, “the proportion of global assets held by this wealth class has also grown significantly, rising to 18% at the end of 2015, almost three times the amount seen at the start of the millennium. So the global middle class has not only been getting bigger in terms of the number of people who belong to it, it has also been getting increasingly richer.”  As you can see in Allianz’s bubble chart below, Asia (not including Japan) has been the fastest growing region and responsible for much of the increase in the global middle class. In fact, it is rapidly catching up to Europe in terms of financial assets. One possible reason for dissatisfaction among the masses in Europe and America is that even though things are slowly getting better, in comparison to other regions of the world, we feel we are falling behind. It’s an Einsteinian economic relativity problem. We talked of fear last week. Be forewarned!  We will dive further into this data in the future with that powerful, incentivizing, sometimes damaging emotion on our mind. 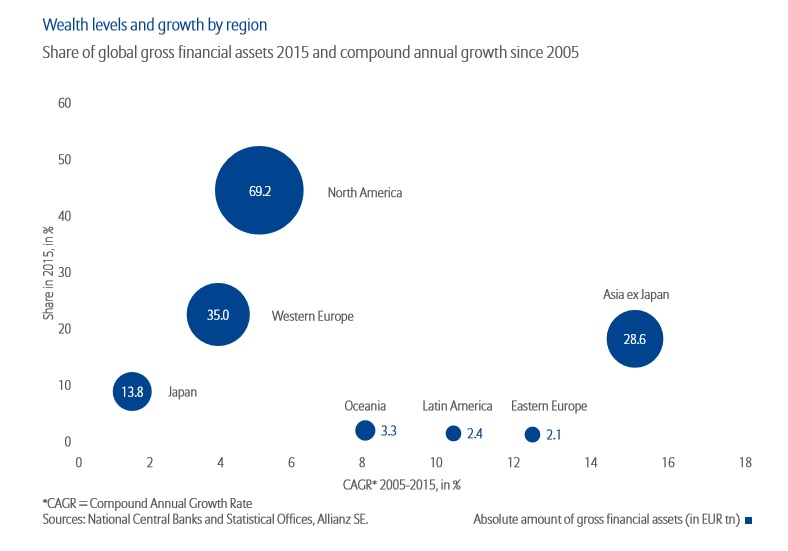 We all fetishize the entrepreneur and the creation of new businesses. And yet, the West has sucked (to use a high falutin economic term) at enterprise creation since the Great Recession. New business creation since 2007 in both the United States and Europe has been like a Japanese child birth ward–not nearly enough babies to fill the place. In fact, the U.S., allegedly the home of the brave and the land of the free, has been particularly bad at new business creation. But, the OECD’s Entrepreneurship at a Glance report gives some measure of hope. So far 2016 is seeing an increase in enterprise creation across a number of OECD countries. This is happening especially in Europe: “The report shows that post-crisis growth in Europe has been more dependent on small and medium-sized enterprises (SMEs) as drivers of economic growth than in the United States.” There is, however, a long ways to go to get to where we were pre-financial crisis. As the OECD notes, “Trend start-ups remain below pre-crisis rates in most OECD economies, although in Canada, France, the Netherlands, Norway, Sweden and the United Kingdom rates were higher at the end of 2015 and beginning of 2016 than before the crisis.” One of the big policy debates we should be having is how policy increasingly places small companies at a disadvantage to big business. I have a feeling, however, through November we will talk of other things instead. 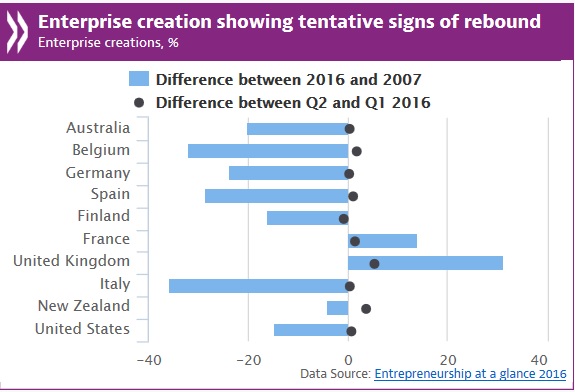 Immigrants to the Rescue

When I was in Silicon Valley a few years ago, the local boosters noted that 50% of the CEOs in the valley were foreign born. It’s both a startling and unsurprising number at the same time. More than any other attribute, the relative success in absorbing immigrants distinguishes the U.S. from the rest of the world. The Harvard Business Review (HBR) provides more data on the importance of immigrants to entrepreneurship and new business creation. According to HBR, “Immigrants constitute 15% of the general U.S. workforce, but they account for around a quarter of U.S. entrepreneurs.” The research also points out that immigrants account for about 25% of U.S. inventors. In fact, nearly 40% of new firms have at least one immigrant as one of its founders. Immigrants are one salve for the lack of new business creation in recent years we discuss above. Changes in policy are needed to make up the rest. 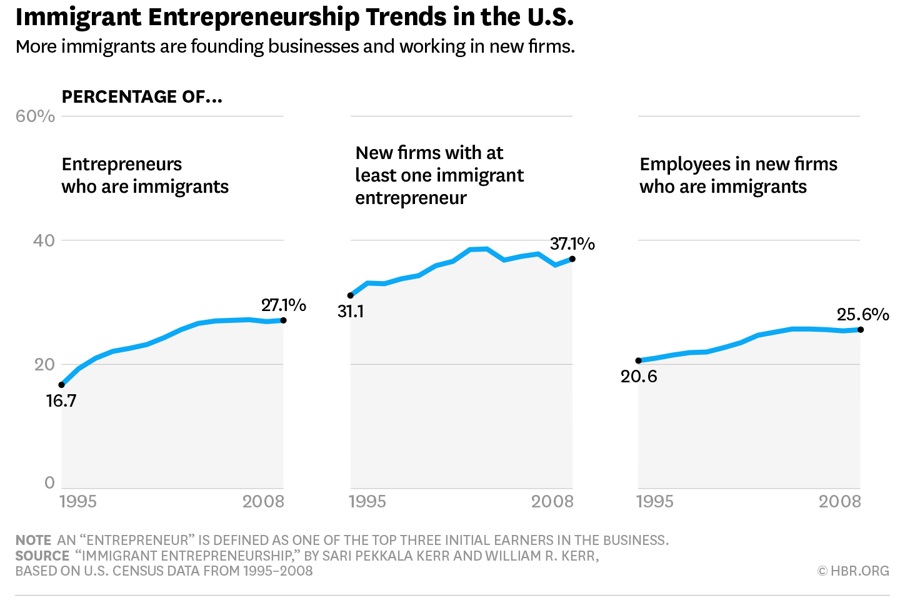 Europe’s Electric Slide, Top Airports and Where Women Rule Europeans and Diversity, Fewer Japanese & More Robots, and What the World...
Scroll to top