There have been many great clutch performances in history. Michael Jordan’s push-off shot against the Utah Jazz to win a sixth NBA Championship, Edgar Martinez’s double down the line to send the Seattle Mariners to the American League Championship and the clutch in my 1987 Toyota Corolla not giving out until we exited I-95 some 20 years ago. But while watching the Grammy’s earlier this week when Adele flubbed the beginning of her tribute to George Michael we were reminded of the greatest clutch performance in history–Jennifer Hudson singing “I Will Always Love You” at the  2012 Grammy’s. Remember the circumstances: Whitney Houston had died less than 24 hours earlier. She was one of Hudson’s idols. The Grammys are watched by millions of people around the world. In a few short hours Jennifer Hudson with no prior warning had to prepare to sing an iconic song by an iconic singer–and she killed it. Completely. The greatest clutch performance in history. So we try not to fumble when telling you about the myth of Chinese nationalism, remind you of the continued troubles in Greece and announce the first operational drone flying car. It’s this week’s International Need to Know, not taking orders from Russia or anywhere else as we tell the story of our mixed-up, muddled world.

The Myth of Chinese Nationalism?

In a time of apparent increasing nationalism in Europe, the U.S. and other regions, the Chinese apparently didn’t get the memo. No, not the government which certainly has nationalistic tendencies, but the people themselves. Foreign Policy magazine points to a new paper by Alastair Iain Johnston, a professor at Harvard (with his name it was either Harvard or Cambridge, possibly Oxford, maybe, just maybe Ball State) that shows Chinese, especially Chinese youth, are becoming less nationalistic. Since 2002, Johnston, in partnership with Peking University, has been conducting surveys asking questions such as “Would you prefer to be a citizen of China?” and “Is China a better country than most?” The number of people responding yes to those two questions and others has actually declined between 2002 and 2015, suggesting a less nationalist bent. This is especially true of younger Chinese, “In each instance of the survey since 2002, respondents born after 1978 were markedly less likely to ‘strongly agree’ with any of the nationalist survey prompts than were their older peers. Perhaps most striking, by 2015, the proportion of older Chinese strongly agreeing to support their country ‘even when it is wrong’ was more than twice the proportion of youth who felt that way.” As always, the world is more complicated than we realize. 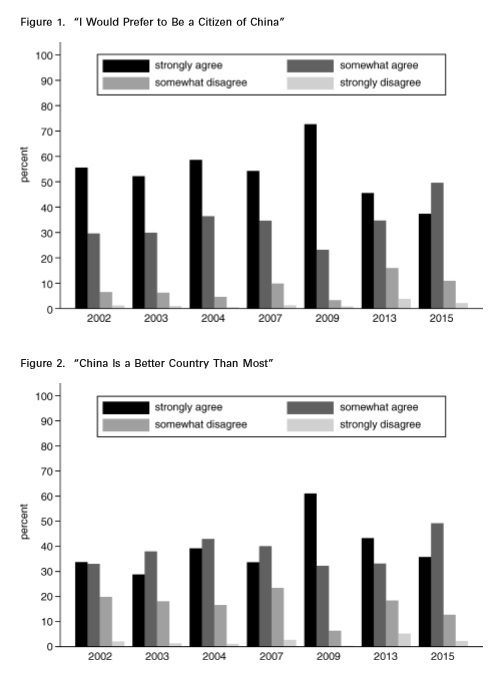 Among your worries, keep worrying about Greece

That kit bag* you keep your worries in? You’ve probably ordered a new one off of Jet.com or Amazon what with all that has been going on lately. But don’t forget to save a large compartment for Greece, which though it hasn’t been in the news much lately, continues to be in a lot of trouble. The IMF recently called Greece’s debt “explosive” and “highly unsustainable” (adding the word “highly” in there is in this case not gratuitous). Greece’s debt to GDP ratio has increased from 159% to 183%. The IMF, of course, believes the only realistic solution going forward is debt relief. Germany, however wants continued austerity. And given upcoming German elections it is not realistic that they will change their tune on this issue. But, it’s also not realistic that Greece will need only one more bailout and then all will be good.  This can is already at the end of the street. One more kick brings it to the corner. What’s around it?

*World War I allusions are all the rage nowadays and who are we to buck the trend? 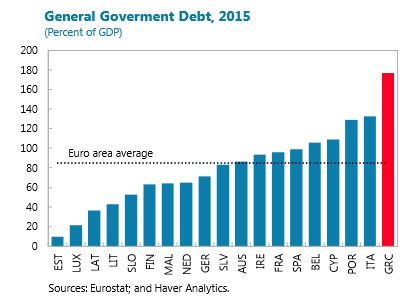 There are many things we all need to know this week but none more important than the drone flying car being tested in Dubai that according to Popular Mechanics will start carrying passengers this summer. When you say “drone flying cars” we check our Straddle Bus skepticism at the door and are all in. The drone, the Chinese-made EHang 184, can carry a passenger weighing 220 pounds plus a small bag. According to Popular Mechanics, “After buckling into its race-car-style seat, the craft’s sole passenger selects a destination on a touch-screen pad in front of the seat and the drone flies there automatically.” We, of course, point you to video of the drone which has a half-hour of flying time and a range of 31 miles. So make sure when you punch in your destination, it’s not too far away. We await possible debunking and technical problems, but in the meantime–go to Dubai and get in your drone flying car! 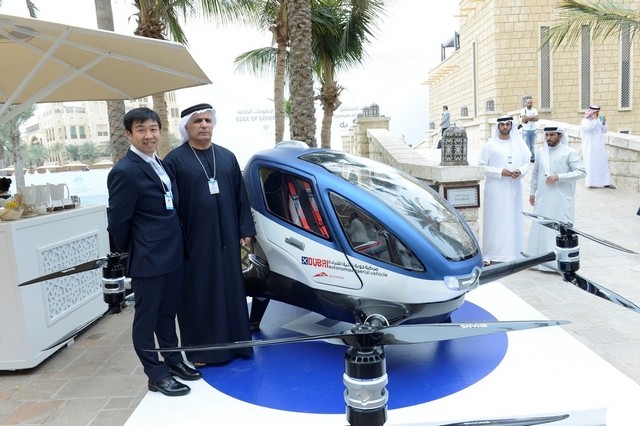