We are amused when people trumpet hardline positions such as “I hate cats,” (fine, don’t get one), “Star Wars is better than Star Trek,” (don’t watch it) or “Rhianna is better than Beyoncé”–(hey, wait a minute!) We are also amused when politicians have to walk back tough stances. So imagine our glee at the President of Iceland’s remarks “that he’d ban putting pineapple on pizza if only he had the power to make laws” only to have to walk it back a few days later after an outcry on social media (is there any other kind of cry on social media?). On his Facebook page, the President recanted: “I like pineapples, just not on pizza. I do not have the power to make laws which forbid people to put pineapples on their pizza. I am glad that I do not hold such power.” While we ponder whether this was actually a clever Icelandic attack on the U.S. political situation, we bring you China in all its connectedness, India in all its solar power and the world in all its better, improved ways. It’s this week’s International Need to Know, putting our pineapples wherever we darn well please (but not on pizza) while bringing you the world in all its strange and wondrous ways.

All the Pieces Matter in China>

We present three bits of data and news from China that are actually connected in one way or another. As the great (greatest?) TV show, The Wire, used to say, all the pieces matter. First, is a perhaps weak piece of data but interesting nonetheless. Three economics professors walk into a bar and create an Economic Uncertainty Index  for China (more next week on their global uncertainty work). It’s based on the frequency of articles about policy-related economic uncertainty in the South China Morning Post (SCMP). As you see below, the index leaped up the last few months, apparently because of a certain loud U.S. president and a rise in worldwide protectionism talk that could damper China’s export economy. But, fortunately China is trying to transform to a domestic consumption driven economy. Yes, but the Shanghai Daily reports that “China’s expenditure on fast moving consumer goods in 2016 grew 2.9 percent, marking the slowest growth in the last decade and also a further slowdown from a 3.5 percent growth a year ago.” Finally we reported earlier this year that Chinese are trying to get their money outside of the country and using Bitcoin as one avenue, but that the Chinese government was trying to curtail this. We noted that is easier said than done. Sure enough, Quartz reports that peer-to-peer marketplaces are picking up the slack, particularly LocalBitcoins: “Yuan volumes on the marketplace have exploded in the past week. Trading on LocalBitcoins currently accounts for about 6% of the total trading volume in yuan, according to data source Crypto Compare. China is complicated. Not even McNulty and Bunk could crack it. 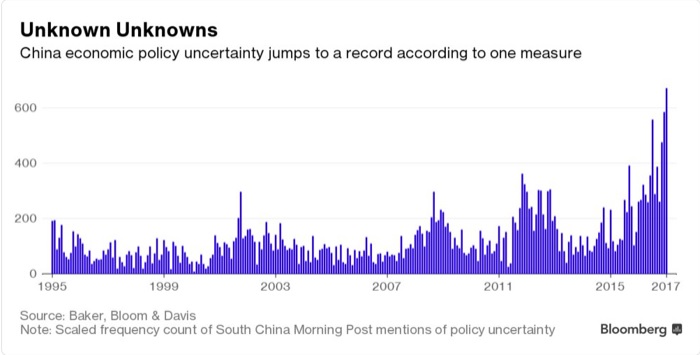 Solar Continues to Stalk the World

We told you of the continued advances of solar in China last month but don’t forget about India. The second largest country in the world is now the third-largest solar generator. Yes, India is now behind only China and the U.S. for solar generation. And it aims to generate much more in the future with a goal of 100 GW by 2022. Transforming to solar generation is important because India now has some of the most polluted cities in the world, more polluted than China’s. More solar generation is possible because of the continued fall in prices and increase in efficiency of solar power. Rooftop solar system costs, for example, have fallen 12% per year since at least 2012. Of course, it’s not just clean energy that India needs since 400 million people in India have no electricity at all. But, India has a “Power for All” program that aims to provide electricity to everyone in the country by 2019. That’s an ambitious target and we’ll be surprised if it’s met. But we aren’t surprised that solar is playing a larger role and India’s solar advances provide more evidence that regardless of changes in U.S. energy and climate change policies, Moore’s Law of solar will prevail. 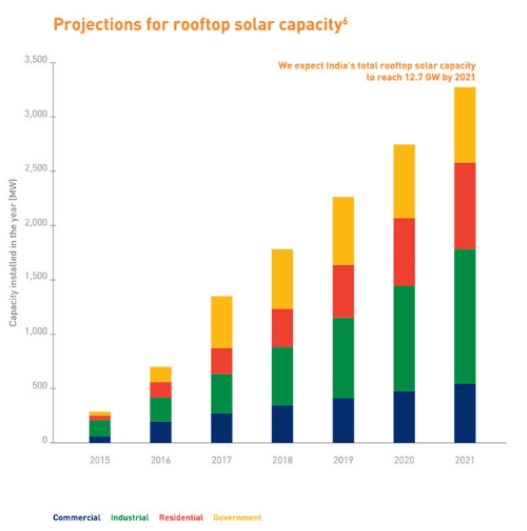 The Continuing Case for Good Times

In our continuing effort to remind you that despite the dark clouds forming, despite the loud clamoring of doom and gloom, we live in the most peaceful and prosperous time in history, we point you to the graph below. It shows the rapid decrease in the number of deaths worldwide of children under five years of age. In 1990, 12.1 million children under the age of five died around the world. In 2015, less than half that number of young children died, 5.8 million. As financial advisors like to say, past performance is no guarantee of future results but it’s important to recognize we have been in a boom time for humans. Let’s hope it was not a bubble.