We are on the road again this week, this time coming to you from the greater Phoenix area where we are keeping a close eye on our beloved Seattle Mariners. When we booked the trip many months ago, we forgot about the World Baseball Classic which started this week. In this tournament, countries play against each other with the winner earning a true world championship. This means some of the Mariners’ best players are off playing for their home countries–Venezuela, Dominican Republic, Canada–and not here for our viewing pleasure. One would think that someone writing something called “International Need to Know” would have kept up to speed on such a world event. But even as we bow our head in shame, take a sip from our beer, watch bright young prospects play in the sun and prepare to bite into a hot sausage sandwich, we bring you an argument worth having, inform you about the country that has the longest economic winning streak and issue information on which country’s passport you would be lucky to have. It’s this week’s International Need to Know, aiming to be at least a .300 hitter in the game of international affairs.

An Argument Worth Having

People fight about just about anything nowadays, often on social media platforms and even more often vociferously and angrily. So we were gratified to recently come across an argument worth having. Early last year, three economists–David Autor, David Dorn and Gordon Hanson– published a paper asserting China did indeed take away large swathes of jobs from the U.S. from 1990 to 2007. The paper, which was full of data, complicated equations and analysis, forced a re-thinking on trade issues by at least some. However, last week, George Washington University economist Jonathan Rothwell published a paper taking issue with Autor, Dorn and Hanson’s data. He asserts that the loss of jobs to China is not as significant as the original paper claimed. The three authors of the original paper have now shot back at Rothwell, stating, “The main methodological critique provided by Rothwell is unfounded. The critique provided does not follow from his own logic.” We do not have the chops to determine which side is right, but will note that the original paper, as we understand it, claims the negative trade effects were localized. That is, loss of jobs to China might have been very harmful to certain local communities, but the paper does not assert an overall loss of American jobs. In fact, as Kevin Drum recently illustrated, American, German and other countries’ manufacturing job losses have been remarkably steady over the last 50 years (see the chart below). Plus, China is now also losing manufacturing jobs–the U.S. is no longer siphoning jobs on net to China if it ever was (depending on which economist you believe). The economists’ argument regarding how many job were lost to China is definitely worth having but the squabble falls into the category of fighting the last war.

The Connecticut women’s basketball team has won more than 100 straight games as it heads into the NCAA tournament. That’s darn impressive for any team not playing the Washington Generals. Australia’s economy has an impressive streak of its own going, having gone more than 25 years without a recession. That’s the current longest streak without a recession in the world. Poland comes in second with 86 consecutive quarters without a recession followed by South Korea (proving I guess that you don’t need an active president to have a successful economy and that a dangerous neighbor next door armed with nuclear weapons can’t stop you either). The mighty Slovak Republic is fourth. These are four fairly disparate economies so there’s probably no big lesson to learn from them as a group. But it should be noted that of the longest economic win streaks since 1970, these four current streaks all rank in the top ten. That so many of the hot streaks are taking place today may, or may not, say something significant about our current world economy. Is the economy better, more resilient, propping itself up artificially or is it just statistical noise? Let’s get Autor, Dorn, Hanson and Rothwell fighting about this. 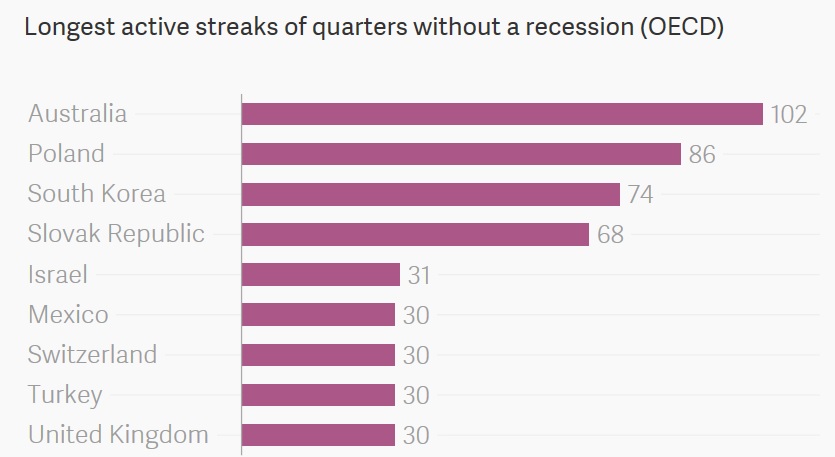 At the airport last week while standing in the TSA pre-check line, which was longer than usual, passengers pulled out their passports and other IDs. I saw identification papers from many countries which leads to the question: which countries’ passport is the best to have? Nomad Capitalist, a consulting firm that helps people move around the world and pay reduced taxes, offers their Nomad Index which provides one perspective of which is the best passport. Its rankings are based on which countries allow the most visa-free travel, are most lax about collecting taxes overseas, have the best perception, provide the ability to have dual citizenship and provide the most overall freedom. Under those criteria, Sweden tops the index mainly because someone with a Swedish passport can travel to 176 countries without having to get a visa. It is also easier for a Swede living overseas to avoid paying Swedish taxes. As you can see in the table below, all of the countries in the top ten are in Europe. For those of you curious, the U.S. ranks only 35th in this index due to the taxes, perception and freedom categories. Afghanistan comes in last. 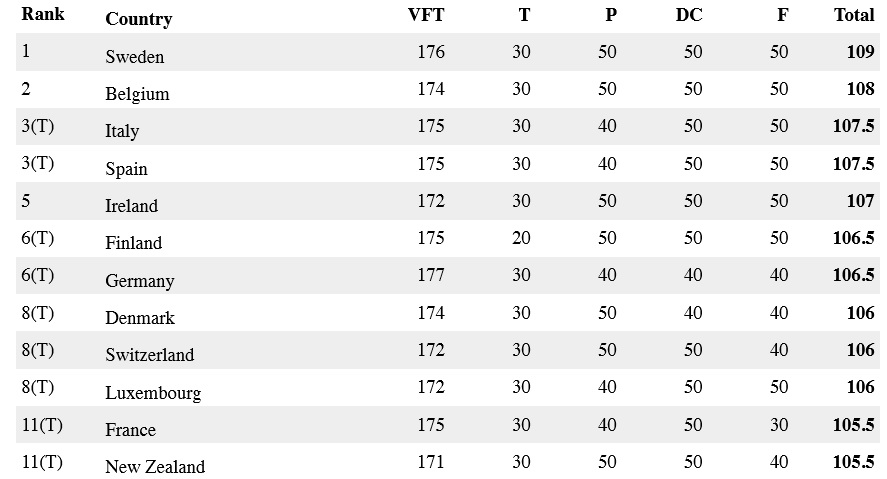 Uncertainty, Investing for the Long Term and Manufacturing Costs Spanish Recovery, Crediting the Chinese and Where Women Dominate the Intern...
Scroll to top