Regular readers of International Need to Know are aware we are unafraid of controversy, willing to tackle the big issues, able to buck convention when convention needs a good buck. So we report to you that last week while in the Valley of the Sun we tried, for the second time, an In-N-Out Burger, fries and milkshake. When we first tasted the famous Los Angeles based chain’s burger a number of years ago we posted on our Facebook page that we far preferred Five Guy’s burgers and fries. This was before our new political age of rage, back when Facebook was a platform for earnest debate on such matters (as well as for kitten videos and photos of food–it was a more innocent, joyous time). Our post caused much consternation, counter-attack and disbelief. But we stuck to our guns. However, we also believe in second chances and so eagerly ordered our food at In-N-Out last week. After this rigorous, fully scientific study we are eager to report that we stand by our original assertion no matter how many INTN readers it may cost us: In-N-Out is not worthy to carry Five Guy’s lettuce. But even as we dip another Cajun fry in ketchup, we serve you Spanish success, Chinese worries and information on where women rule the Internet. It’s this week’s International Need to Know, the fast food of international information only more nutritious.

A number of years ago we had our cell phone pick-pocketed while on the subway in Barcelona. We chalked it up to the struggling Spanish economy and our careless ways. But amidst continued Brexit worries (more on that soon), Dutch election uncertainty and our continued angst over Italy, today we find European rays of light in Spain. The country’s economy was one of the hardest hit in the EU crisis, but last year its economy grew 3.2%, the third straight year of relatively robust growth.The Spanish economy continues to grow at the same rate this year. Deleveraging has occurred in Spain with household debt decreasing from over 120% of GDP to 97% of GDP over the last six years. Non-performing bank loans have fallen sharply too. There are, of course, still great challenges. Unemployment has fallen from 27% but it’s still high at 18%. And youth unemployment, although it’s fallen too, is still crazy high at just over 40% causing a lost generation of Spaniards. Also worrisome is that productivity is not only not growing but has decreased as you see in the chart below. Nonetheless, Spain, unlike Italy and Greece, has shown signs of life. That is a good and needed boost for the EU. 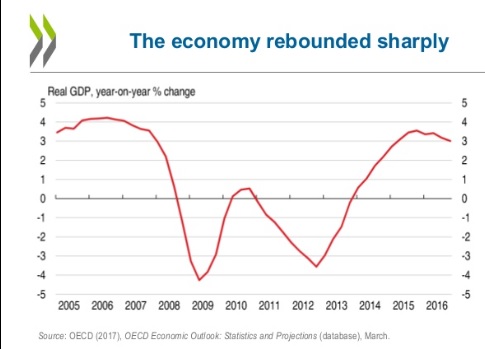 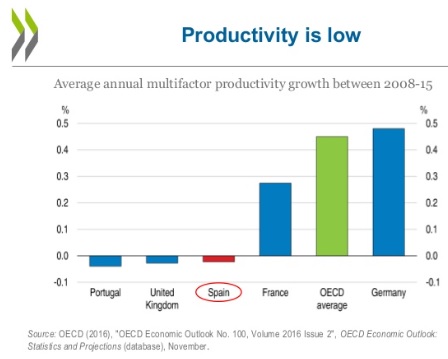 If you want to look for positive signs in the Chinese economy, you can do so. If you want to look for negative ones, they’re easy to find too. China, as always, is complicated. Given that the rain pounds our window as we write, today we look for stormy weather in China and find it like Lena Horne humming a lyric. One worrisome barometer is that credit continues to grow at a faster pace than the economy. According to the chart below provided by the French financial firmNatixis, aggregate financing is growing 12.8% year over year. China is trying to transition from an export/infrastructure investment economy towards a more domestic consumer driven one. But, as you see in the second chart below, retail sales growth, although still increasing at a pretty good rate, has been steadily trending downwards since 2011.These two trends don’t seem sustainable. Of course, this is not to say China is about to crash, but it bears (wait, is that a pun?) watching. 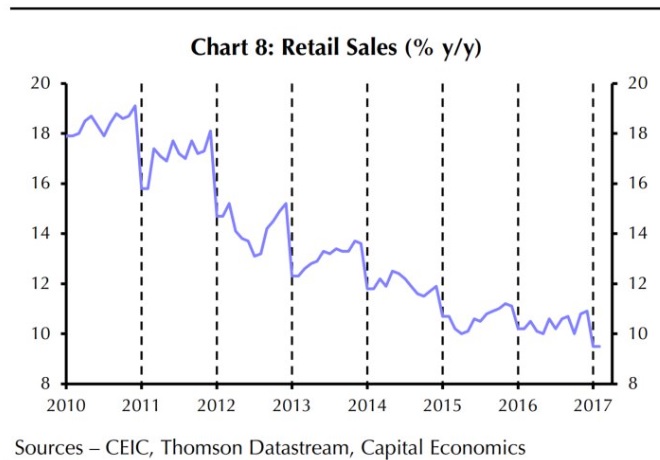 Where Women Use the Internet More

We are not surprised but we were also unaware that in general men use the Internet more than women. Ten jokes immediately come to mind regarding men dominating Internet usage, none of which are suitable for a high-brow, sophisticated venue such as INTN. But, courtesy of the World Bank, we learn of 13 countries where women are on the web more than men. Almost all of the top five are fairly predictable coming from Northern progressive countries, including Finland, Denmark, Sweden and the Netherlands. But we never would have predicted that Bahrain would take the top spot. The full list of countries where women use the Internet more than men is below. 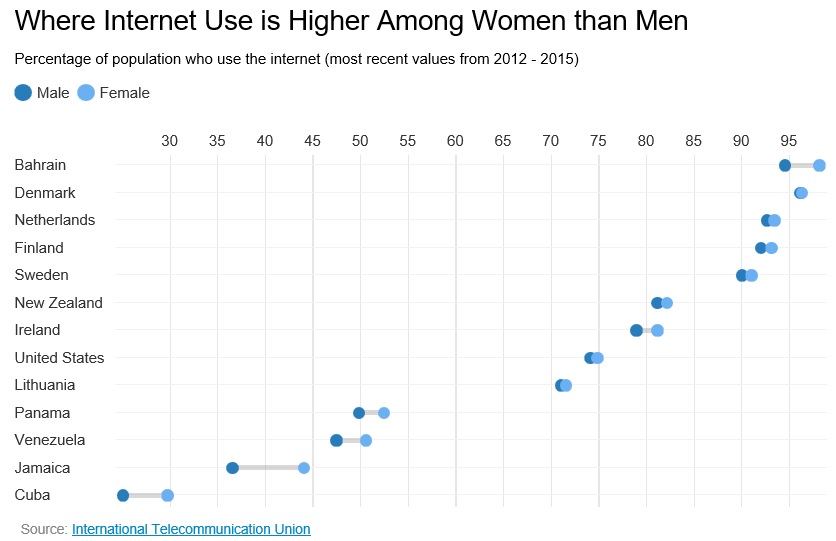 An Argument Worth Having, Economic Winning Streaks and the Best Passports Canada First, Hello China from India and Where the Forests Are
Scroll to top