In recent months, thanks to a client providing us a bus pass, we have been taking the bus more frequently into downtown Seattle. Specifically we have been riding the notorious E Rapid Ride which travels down Aurora Avenue and whose ridership is not, shall we say, the type of people who are members of the Bellevue Club (where we had a meeting yesterday–more on that, perhaps, in the future). In fact, we are fairly certain on one mid-day ride a few weeks ago that we were the only rider not on meth. On various rides, we have had to roust the passenger next to us who was passed out, broker a fight between a homeless woman and the bus driver and walk by a passenger brandishing a sword. At first we were a bit snobbish about all of these rumblings on the bus but now we accept them and welcome them (as long as the sword is not brandished on us or anyone else). We realize these rides are one of our few exposures to people outside of our socio-economic class. A book we are reading, which we highly recommend, The Complacent Class, talks about how the U.S. is more segregated than ever: economically, educationally, socially and racially. We do not agree with everything in the book but its assertions and data are thought provoking. Even as we continue reading the book, we are not complacent about immigration in Canada, or about how China and India measure up on the Internet or even upon discovering some surprising data about forests. It’s this week’s International Need to Know, integrating data, analysis and information as best we can.

We have witnessed revolts against immigrants in parts of Europe and have seen it up close here in America as well. Now Canada, the apparently mild mannered country to the north (having been to hockey games I’ve never understood that stereotype), might be joining the raucous fray. A new poll shows a “plurality of Canadians disapprove of the way the Trudeau government is handling the recent illegal border crossings.” 48 percent of those surveyed say those migrants crossing illegally from the United States into Canada should be sent back. One might think these Canadians are merely worried of American blue state refugees wandering into their country with glasses of roséand quinoa kale wraps* (and who wouldn’t be?), but the survey question clearly refers to people “from the Middle East and Africa” as you see in the graphic below. In addition, 46% of respondents disapprove of the way the Trudeau government is handling the refugee issue. In refugee matters, Canada is not an outlier but following other countries attitudes. As we have written before, we live in a new age of fear, and like all such ages, the risks of giving in to such an emotion are ripe for trouble and danger. . 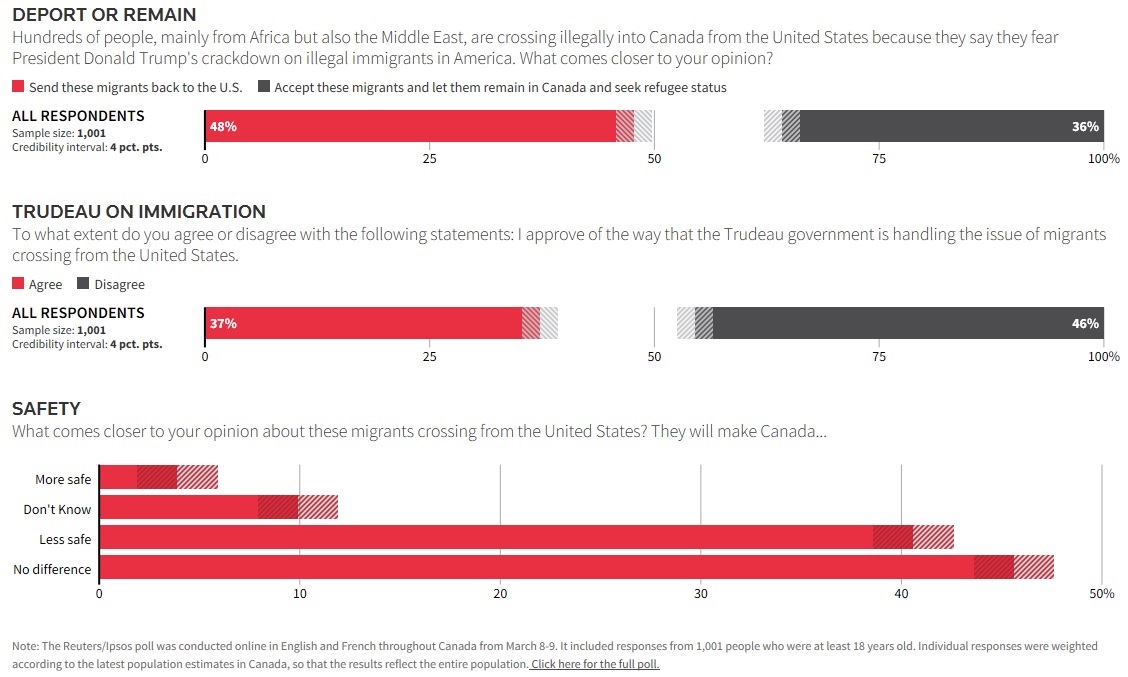 *Full disclosure: in the last two weeks we too have sipped rosé and munched quinoa (but not in a wrap!)

Hello India? This is China

Twenty years ago there was a debate about who would develop faster, China or India. China won that argument as easily as Gonzaga will defeat West Virginia later today. China, until recently, averaged higher GDP growth and built up much better infrastructure. It is also way ahead in the digital economy. As you see in the graph below, far more Chinese use the Internet than those in India—71% to 21%.  Not coincidentally, Chinese are also far more likely than Indians to own a smart phone—68% to 18%. As the Pew Research Center reports, this digital advantage is due to China building a larger middle class with more wealth, “Between 2001 and 2011, the share of middle-income Chinese, those making $10.01-$20 a day, jumped from 3% to 18%. In India over the same decade, the middle class share of the population grew from 1% to 3%.” Of course, today China’s economy is growing more slowly (probably slower than official China government reported figures of 6.7%) and India’s economy is growing faster, around 7%. And since all those Chinese on their smart phones will be distracted playing video games and hanging out on WeChat, India’s economy, and digital sphere, may catch up more quickly than we think. 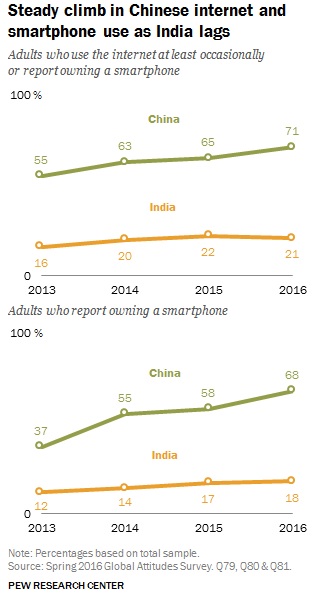 Seeing the forests through trees of new data

We have all read stories about the loss of forests, including the catastrophic loss of rain forests, but did you know in some countries there has been a gain of forest land in recent years? China, Russia* and India all have more forest land today than twenty-years ago, according to the World Bank. There have been huge losses in South America, especially in Brazil which since 1990 has lost 531,000 square kilometers since 1990. Large parts of Africa have also lost forest land. But many countries, especially developed ones, are gaining forest land. In fact, this data provides evidence for a pet (buffalo, as you will see) theory of ours that as more and more people huddle in mega cities, country sides will return to the way they were 200 years ago since no one, or at least few people, will be living in those areas. This will happen in many large countries, including in large swathes here in the U.S. In the future, we may again be singing about where the buffalo roam. 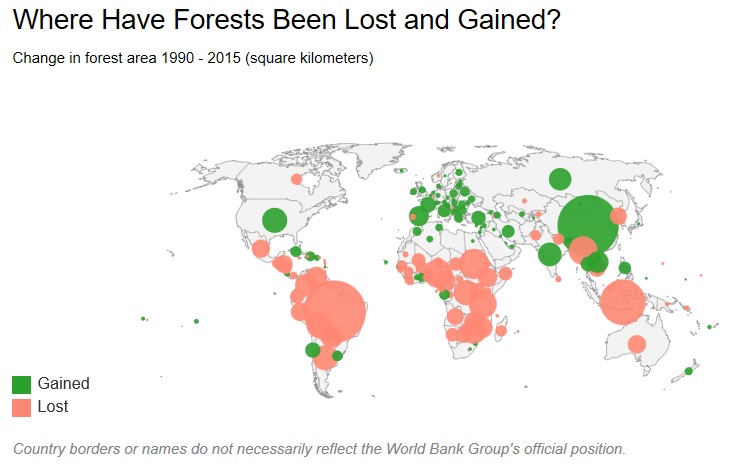 Spanish Recovery, Crediting the Chinese and Where Women Dominate the Intern... Where Tech Workers Should Live, Where Inequality is Decreasing and Where the...
Scroll to top