Recently at the gym while exercising, we were watching the Boston Celtics demolish the New York Knicks. It was a rather boring game. We looked across the room and saw a bank of TVs in front of a set of treadmills that were showing a different basketball game. We squinted our eyes to figure out who was playing. Later when we walked over to the TVs we realized the channel was showing a video game of basketball–the treadmillers preferred to watch two people playing a video game simulating a basketball game rather than watch an actual NBA game. I suppose we can’t entirely blame them given the poor entertainment value of the Celtics-Knicks matchup. We took two lessons from this: First, even admitting our bad eyesight, it is clear video game graphics have advanced so much that from a distance it is difficult to tell reality from virtual. Second, we are near a new era when it will be impossible to distinguish real life from artificial. Of course, if the recently popularized theory is true that we are all just a software simulation, then we are building imaginary worlds on top of illusions. Speaking of imaginary worlds, from time to time we will take deeper dives into issues and places, and this week, in honor of President Xi Jinping’s visit to the U.S., we look at the always confusing, confounding, complex China, including China’s role in the world and the state of its economy, finishing up with global population changes. It’s this week’s International Need to Know, using our game controller to keep you apprised of our massively multiplayer online role-playing world.

Is China Dominant? That giant sucking sound you hear? Many people claim it is the United States abandoning its 70-year role as a global leader. Into that void many people assert (their voices are at least powerful enough that they reach our tender ears) strides China. They are asserting this is true for trade, the environment and the world economy in general. And it is true that China is much more important than it was twenty years ago and even ten years ago. But, as we noted in this space at the beginning of the year, it is difficult for China to be the leader of free trade when its borders remain mostly closed to trade and investment. China is working to clean up its environment and deserves credit for what they have accomplished, but China’s laws and practices have a long ways to go before they reach the standards of developed countries. And finally there is finance. China’s formal and shadow banking systems are murky and we’re not certain anyone, perhaps even the Chinese themselves, completely understand them. And when we look at global financial payments, China still lags far behind the U.S., the EU (the Euro is not gone yet!–soon we will dive deep into the roiling English Channel of Brexit and the EU) and even the British Pound. For that matter, though close, the Renminbi is still behind the Japanese Yen and Canadian dollar in its share of global payments. Barring catastrophe, we expect over the next two decades that China may become a leader in any number of these categories. But for now the world leadership vacuum is exactly that, a dark empty void, for good, bad or between. 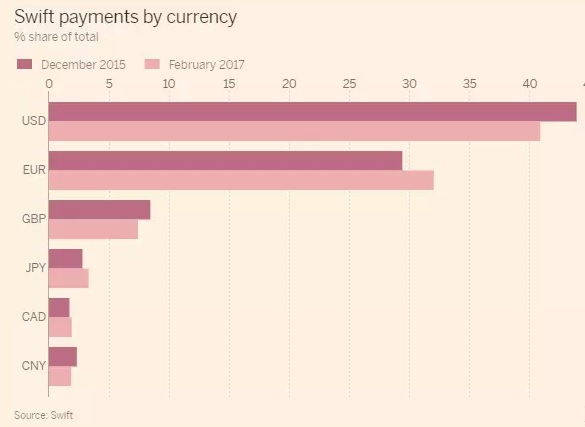 As President Xi sits down to a meatloaf sandwich in Mar-a-Lago, what is the state of his country’s economy? By many measures, the economy is doing fine. After some worries last year, the economy appears to have stabilized. The government has launched a variety of initiatives including a new Silk Road initiative and a new Special Economic Zone in Hebei Province. On the other hand, we have warned before that official data in China is like a cable company saying it will be at your house between noon and three, not always to be trusted. A year ago, we looked at beer sales to see what was really going on in China’s economy and as we often do, we turn to beer again, and noodles. Reuters reports that “Tsingtao Brewery Company, China’s number two brewer, posted its steepest drop in net profit in 20 years last week, blaming tough competition and weak demand. Noodle maker Tingyi saw profits drop by a third.” The stable economic growth also appears to be built on credit which has grown at a much faster rate than the economy. Much of recent investment in China is by state owned companies. For how long can China goose its GDP with credit? Finally, perhaps most relevant to the host at Mar-a-Lago and as we noted in the post above is that China’s economy is still very much closed in many ways. For example, as you see in the graph below, China ranks as the second most restrictive major economy in the world. Or, as former Treasury Secretary Henry Paulson says, China’s market is far more closed today than it was a decade ago when he was negotiating with the Chinese. So China’s ship is doing well but has some rocks and treacherous islands (not necessarily in the South China Sea) to navigate ahead. 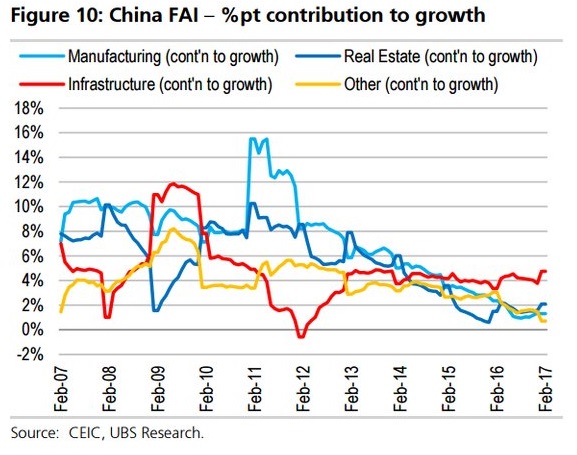 As the World Turns

Sixty some years ago in 1950, China, India and the U.S., in that order, were the largest countries in the world by population. The same is true today but many of the other top populous countries are very different. As you see below in the graph courtesy of Robert Ward of the Economist Intelligence Unit, Russia has fallen from fourth to eighth, Japan is barely in the top ten and Britain and Italy are nowhere to be found. Meanwhile places like Indonesia, Nigeria and Bangladesh have climbed into the top ten. If current trends continue, always an iffy proposition, India will be larger than China and Nigeria larger than the U.S. in 40 years. To give a sense on how long ago 1950 was and at the same time how much constancy there is in certain parts of life, this year is the first baseball season without Vin Scully or Connie Mack working in some level of it since 1885. Now graph that! 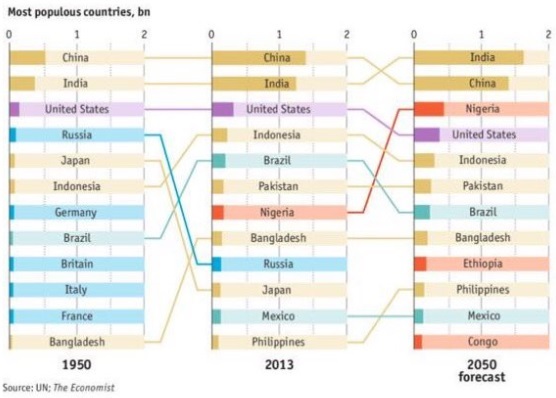 Where Tech Workers Should Live, Where Inequality is Decreasing and Where the... Who is the World’s Superpower, Where Taxes are High and Where Millennials...
Scroll to top