On the occasions we take public transit, our walk to the bus takes us by a cemetery. It’s a helpful reminder on our way to meetings which may contain challenges, puzzles and even on occasion acrimony, that in the long run, it will not matter. On a recent such walk, we were reading on our smartphone that Seattle has set a 122-year record for rain. It was, in fact, raining while we read this news. As we looked up from our phone, we saw a cemetery worker fixing an automatic sprinkler. We noted that all the sprinklers were turned on, spraying water onto the already damp environment, which we found neither efficient nor smart of the cemetery. Compounding this, one of the sprinklers was spraying directly into the sidewalk upon which we trod. We are one of the few Seattleites who uses an umbrella which we turned from the sky towards the sprinkler to block its rush of water. As we passed by another tombstone, we thought at least stupidity is not dead. But even as close our umbrella we open up the skies to France’s young and restless, to what India is exporting more than China and to who is emitting the most CO2 into the atmosphere. It’s this week’s International Need to Know, coming to you weekly, almost as inevitable as death and taxes, but much more useful, sweet and helpful.

Explanations for the results of the French election, like explanations for most election results, like life itself,* are complicated. We could post a myriad of charts about the election but today we choose only two. The first shows who the young voted for, and it was not for the remaining centrist in the race, Macron. No, the populist on the left, Melenchon received the most number of votes from the age 18 – 24 crowd, with the populist on the right, Le Pen, coming in second among hip millennials. This is perhaps not surprising given a) that as in much of Europe, youth unemployment continues to be high in France (23.5%); and b) as we told you last year, democracy’s brand with the young is not as strong as it was with previous generations. The second chart below (courtesy of Ian Bremmer’s Twitter feed) maps high unemployment geographic areas with where Le Pen did best, and the similarities are striking. The French election like many elections in the last year have brought to the fore two crucial issues for the world–economic stagnation and an increasing affinity for authoritarianism. These two issues, of course, are related. 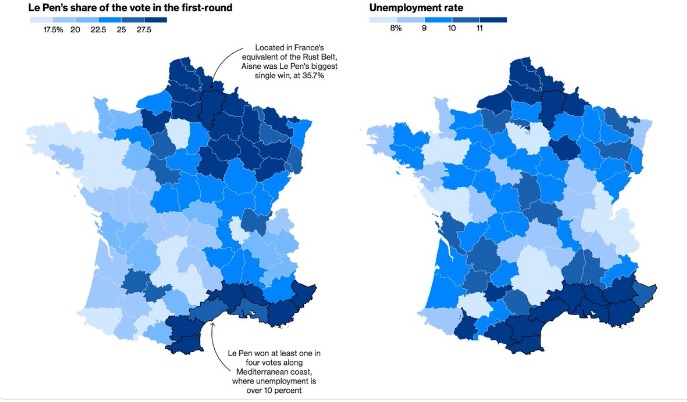 China vs. India on Exports

China has far outpaced India in merchandise exports over the last 15 years. Everyone knows that. But perhaps not so well known, though obvious when one thinks about it, is that India is a much larger exporter of services than China, service exports being things like software, programming, architecture, engineering and the like. China is trying to transform into more of a services economy and one might expect that services export gap with India to narrow over the coming years. But, for that to happen, we expect China will have to do something about intellectual property theft and other associated issues. It will be difficult to have trust in services provided by China under the current legal and cultural norms there. That is not to say that China does not have a large services industry, including in information technology (Tencent is very large and very innovative), but will these services translate internationally? We expect they will over time and that will eventually compel China to open up its markets to foreign competition. Interestingly, both China and India’s economies are roughly equal in their dependence on exports. For China, exports are 22% of GDP and for India, they are 20%. But, China relies on goods exports, and India relies on service exports. 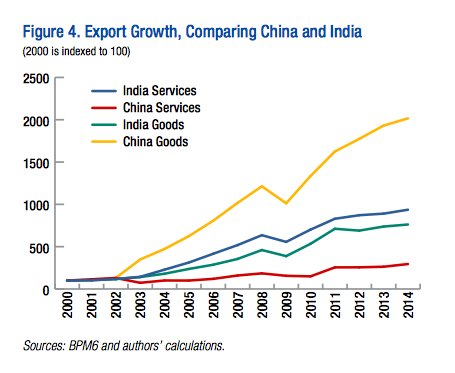 Who is on First?

We recently came across on Twitter (one of the worst human inventions of all time, and yet one we can’t stop ourselves from using) the first chart below showing China far and away as the largest emitter of CO2 into the atmosphere. China’s environmental problems are a huge challenge. Fortunately, they are working to address these environmental problems, although often it is a one step forward, one step back process. By its sheer size and increasingly developed economy, what China does or does not do, will have a huge effect on climate change efforts. But, it’s important to note China is not even close to being the largest emitter per capita. As you see in the second chart below, Australia takes that dubious prize. The U.S., the second-largest overall emitter, is a much larger emitter than China per capita. Everybody’s favorite northern cousin, Canada, is also, because of its large energy industry, a large per capita emitter. 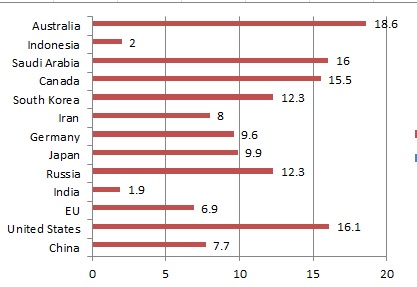 IMF Explanations of Declining Labor, Are We Wrong about Chinese GDP, Where the... Great Vacuum War, Peace in Trouble?, Poor Middle Class
Scroll to top