We find ourselves today ruminating about pancakes, Roger Federer and excellence. We were fortunate, thanks to a friend, to attend a charity exhibition match in Seattle last weekend between perhaps the greatest men’s tennis player in history, Roger Federer, and one of the top ranked players in the world, John Isner. Earlier in the evening these two matched up with Bill Gates and Pearl Jam’s Mike McCready in a doubles match. It was a wonderful evening that featured this amazing shot by Federer (fourth video on the page). Federer has lots of talent, of course, but he worked hard mentally and physically to become one of the greats. Before we were married, most Sunday mornings we would make pancakes while listening to Johnny Cash. We still cook pancakes today though not as often as in our weekly bachelor days. And yet, despite our many hours practicing our pancake skills, we cannot claim we are the Roger Federer of pancake makers. We do not know if we have spent Malcolm Gladwell’s 10,000 hours making pancakes but one would think we should be pretty darn good by now. But instead we research pancake schools on the Internet as we serve hot off the griddle more evidence of China trying to fill a vacuum, some worrisome signs about peace in our world and just how global the fall of the middle class is. It’s this week’s International Need to Know, the French Toast of international news, data and information.

We talked a few weeks ago about the world’s leadership vacuum. China is continuing to try to fill it. For example, last week China demanded that it be the sole source of financing for a major logistics railway in Pakistan, and the Pakistan government agreed to the demand. Originally, both China and the Asian Development Bank (ADB) were to finance the railway. The ADB is a multilateral development bank funded by both Western and Asian countries. The bank is often involved in projects like the Pakistan railway. However, Pakistani newspaper The Dawn (it’s always reddest before the dawn) reports that the Minister for Planning and Development Ahsan Iqbal said in a news conference, “China strongly argued that two-sourced financing would create problems and the project would suffer.” Originally the ADB was going to provide $3.5 billion for the 1,700 kilometer rail line which is “considered the backbone of the country’s logistics, connecting two major ports with the rest of the country for transporting goods and passengers.” Even before political changes in the United States, China was playing a larger role in world events, including in development. In fact, in 2015 it created an Asian Infrastructure Investment Bank (AIIB) to rival the ADB. The AIIB recently received a big endorsement from Bank of Japan Governor Haruhiko Karoda, “Infrastructure needs are huge and it’s simply not possible for the Asian Development Bank and the World Bank to fill the gap completely,” said Kuroda. Space is full of vacuums. China is trying to fill ours.

*A title that only Charlie Mitchell will fully appreciate

All We Are Saying

While listening to the remarkable Louis Armstrong cover of Give Peace a Chance (no, really, check it out—peace has never swung so hard) and reading about political protests by both the left and the right, it occurred to us that what is missing from today’s protestors as opposed to those from years gone by is optimism. There was an optimistic bent to long ago protests fueled perhaps by a belief that their agitation would lead to a better world. Today’s protesters fill the optimism void with anger.*  Perhaps this is because although we live in the most peaceful and prosperous time in human history, there are worrisome signs of regress. The last couple years of trouble are either a hiccup or perhaps this long virtuous cycle of peace and prosperity is turning towards something darker. Take peace, for example–the last few years have seen peace take a beating. Looking at one measure—The Global Peace Index—there are now fewer countries in the “more peaceful” part of the spectrum as you can see in the maps below. Much of this is due to increased terrorism:. According to the Peace Index, “Deaths from terrorism increased by 80 per cent from last year’s report with only 69 countries not recording a terrorist incident.” Internal conflicts leading to more displaced people also led to the peace index achieving its lowest score since 2008. Whether this negative data is a short term blip or we are in for a trend of trouble is, of course, one of the more important questions of our time. 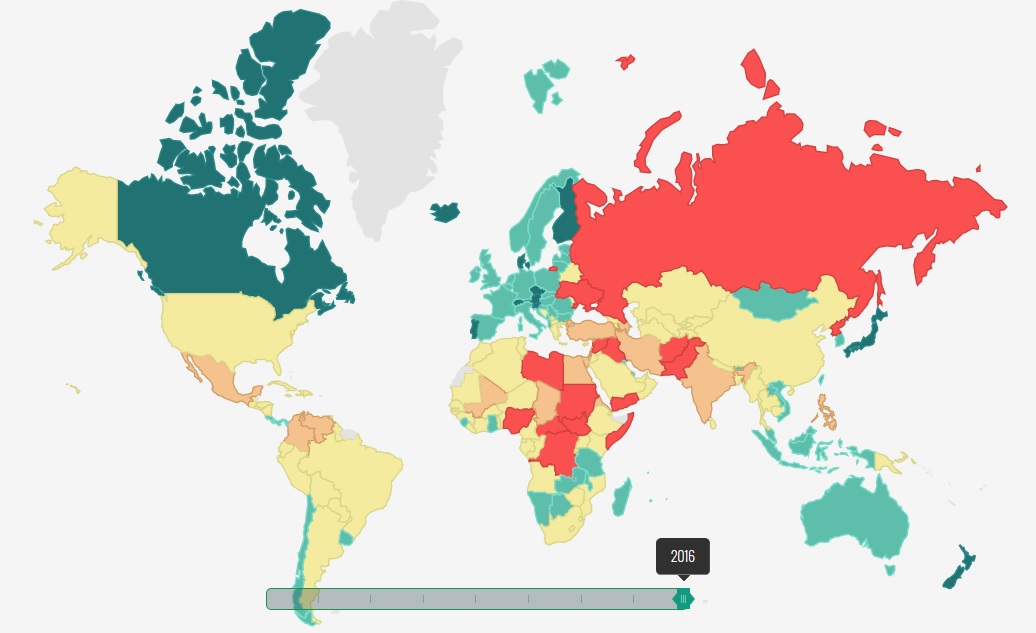 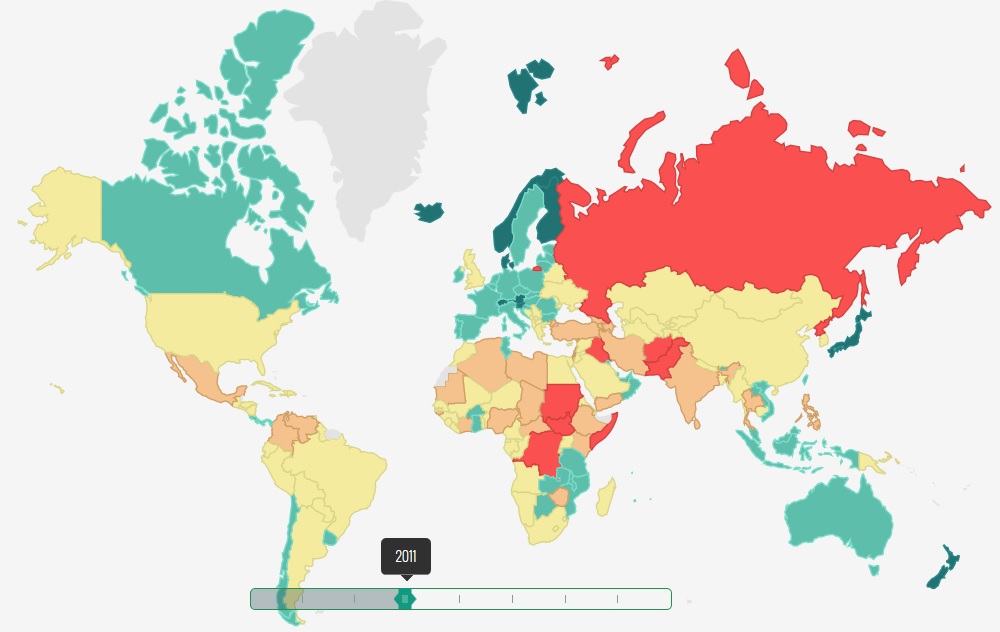 *Or maybe it is anger that is causing the regress.

There has been much debate about the difficulties that America’s middle class is experiencing but like most trends, including the decline in manufacturing jobs (not unrelated to the fate of the middle class!) this is a global trend. In fact, Thomas Piketty, who authored the famous book,  Capital in the Twenty-First Century, three years ago, recently published new research showing China’s middle class is suffering too. In the chart below, Piketty shows the income share of the middle 40% of the U.S., China and France, all of which are lower than they were a few decades ago. Piketty, in his new paper, writes, “China’s inequality levels used to be close to Nordic countries and are now approaching U.S. levels.” Clearly this is because of NAFTA…wait, maybe these issues are more complicated than those attacking trade deals realize. 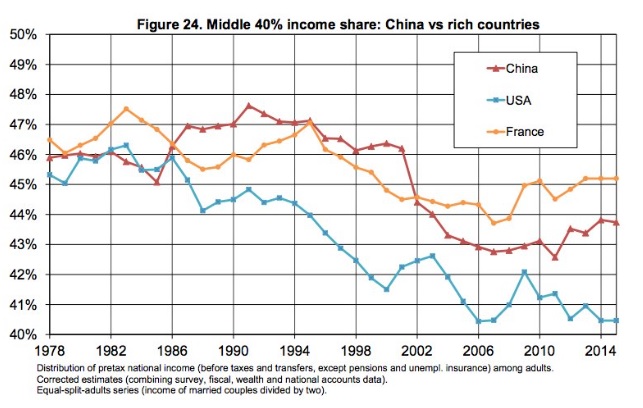 The Young and Restless, China vs India, Who’s on First Fast & Furious, China Belt with Indian Suspenders and where CO2 Emissions... Scroll to top