We write this as we prepare to head to Washington, D.C. for both our Uncle’s 80th birthday celebration (happy birthday, John!) and later to attend a conference on Directed Energy Weapons (i.e., really cool ways to blow things up). Many years ago we lived in the nation’s capital at a time when it was one of the crime capitals of the country. We were mugged twice while there, once at gun point (it was a surprisingly polite conversation with the mugger–we even both wished each other a “good evening” at the end of the forced transaction) and once we were jumped over a Kentucky Fried Chicken two-piece dinner (that engagement was not nearly as polite). Back then we even had a friend who was mugged in front of the Supreme Court. Today, although the politics are much more riotous, the city itself, like many big cities, has been gentrified into a fog of calm.The crime rate is not much to worry about, the restaurants are fancier and real estate is far more pricey. We are looking forward to seeing our old haunts, including the venerable Tune-Inn, one of America’s great bars. So we will take next week off in honor of our Uncle and learning about blowing things up with phasers and lasers. But this week neither the White House or Congress dissuade us from bringing you the Yin of China’s economy, accompanied by the Yang of its innovation, finishing with a brief comparison of emerging economies. It’s this week’s International Need to Know, a soft wind of knowledge in the heat and humidity of the East Coast.

It’s time for another episode of the Yin and Yang of China, everyone’s favorite, large, complicated, nobody-really-knows-what’s going-on country. We start out with the yin–what the heck is going on with China’s economy? We’ve been generally more positive than others about the prospects for China’s continued prosperity. The economy seemed to stabilize this year after worrisome signs in 2016. In fact, the latest China sales index is at a 20-month high, driven mostly by the manufacturing sector. But a few weeks ago we noted in passing that the yield curve had inverted in China. Since then the inversion has become more pronounced (see graph below). Inverted yield curves often predict a recession. Not coincidentally, as Reuter’s notes, China’s central bank has been injecting lots of liquidity into the financial system. In fact, the amount of money sloshing around in the Chinese economy does appear to be leading to an increase in prices. For example, land prices are up 39% year to date (they rose 18% in the moderation of 2016). On the other hand, the South Morning China Post reports that “more than 80 per cent of Beijing owners are reducing their asking prices, while just three months ago, 80 per cent were raising prices, according to property agent Homelink.” That’s a lot of volatility and some of this may be reflecting the difference between official statistics and what is occurring on the ground. What’s happening in China? We’re not sure but we’re keeping an even closer eye than usual–and we may need to see an economic ophthalmologist to get a real clear view. 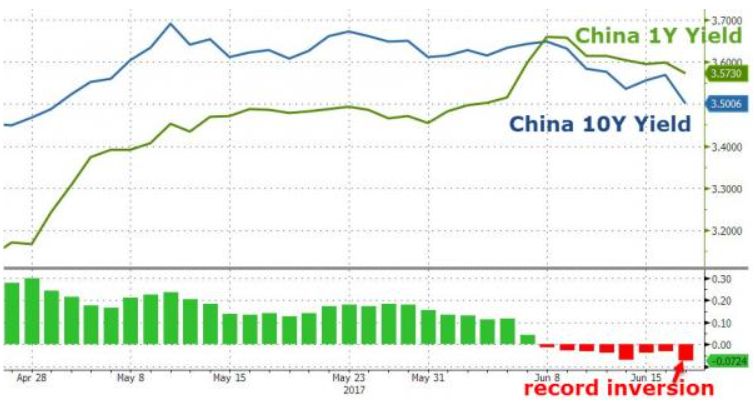 It’s a long story but a meeting with a friend trying to help send people to Mars led to our reading the science fiction novel, The Three Body Problem, by Chinese author Liu Cixin.  The sections of the book we like the best have nothing to do with science fiction but rather depict life during the Cultural Revolution. Nonetheless, the science part of the novel seems to be coming true with news that Chinese scientists beamed back “entangled” photons from space.  The breakthrough is important in its own right, of course, but is also another refutation of those who claim that China does not innovate. There is a tremendous amount of innovation taking place in China. At any rate, the Chinese scientists reported “a successful transmission of entangled photon pairs from space to ground stations separated by 1,200 km, a major technical breakthrough towards quantum communication over great distances.” Previously such transmissions weren’t possible beyond 100 km. This work is continuing to lay the foundation for quantum computing and communications, two new technologies that as we discussed last week could help the world reckon with the end of Moore’s Law. 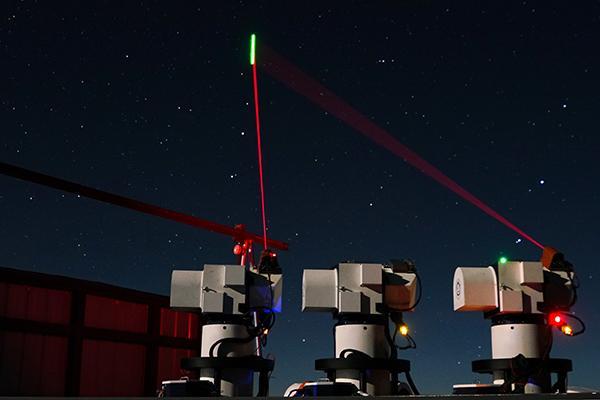 We will be brief as our flight is about to depart, but courtesy of the great Jon Bensky we show you the McKinsey Global Institute’s economic comparison of emerging markets. Jon, who is our go-to person on India (and other international issues for that matter), notes that India comes out well in these comparisons. Its GDP growth rate matches official Chinese numbers and McKinsey’s assessment of their risk is that it is much lower than other emerging markets. India, like China, is a place to always keep your eye on. 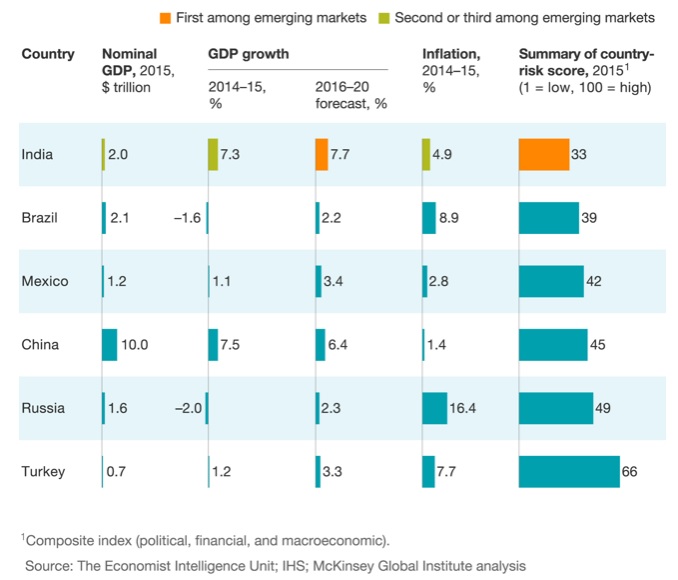