Ignorance is bliss, they say. Apparently this adage is from a 1747 poem by Thomas Gray. Who is Thomas Gray you ask? Well, refer back to the first sentence. At any rate we’re reminded of this old saying by the multitude of data and insights that are used in sports nowadays. Baseball strategy has been transformed the last decade by teams finally adopting sabermetrics and by new uses of spatial data information. The result is that there is less base running, balls in play, less risk taking and nearly all teams are using the same in-game strategies. In other words, it has dulled some aspects of what made the game great and interesting. So too in basketball. Teams increasingly understand a three-point shot is intrinsically more valuable than a two-point shot. Consequently, basketball games are increasingly a series of three point shots rather than a multitude of different types of plays, again dulling and destroying some aspects of what make the game great. This is increasingly true of many sports and many endeavors of life. We love data and we were into sabermetrics 30 years ago before it was cool. But perhaps it turns out that understanding things too well can in the end destroy them. The mystery of life is not something to take lightly. Ahh, but not international news and data. No, there ignorance is not bliss and so we bring you the Age(ing) of China, examine CEO’s worst fears and embrace the Department of Loneliness. It’s this week’s International Need to Know, stealing bases and posting up on our world’s diamonds and courts.

It cannot be said often enough in a world that believes otherwise, that things are not binary. It is not A or B, black or white, one thing is wrong and the other is right. Our world is more complicated than that. Two things can be true at the same time (or false). China is a great example of this. People want to pigeon hole it as either a catastrophe waiting to happen or as inevitably marching to greatness. The truth is, like almost any country, China has its assets and opportunities as well as liabilities and challenges. So even as we remind you today of its aging demographics, that does not mean we discount its continuing innovation and other assets. But China is getting old—it’s demographics currently are almost as old as the United States and if trends hold its demographics will shortly be older than the U.S. The latest figures show that China’s working age population (ages 15 – 64) has topped out at just under 72% of the population. Of course, given China’s size, that still means they have nearly a billion working age people. But, GDP only grows with increases in productivity and increases in working age population. If China’s working age population is no longer increasing, unless they buck the worldwide trend of weak productivity, China’s GDP growth will start to slow (whether official figures reflect this or not). In addition, the World Health Organization classifies a country’s population as “aging” when the percentage of people over 65 reaches 7 percent. Currently, 11.4 percent of China’s population is over the age of 65. China is still doing amazing things, but it also has some challenges, including its aging demographics. 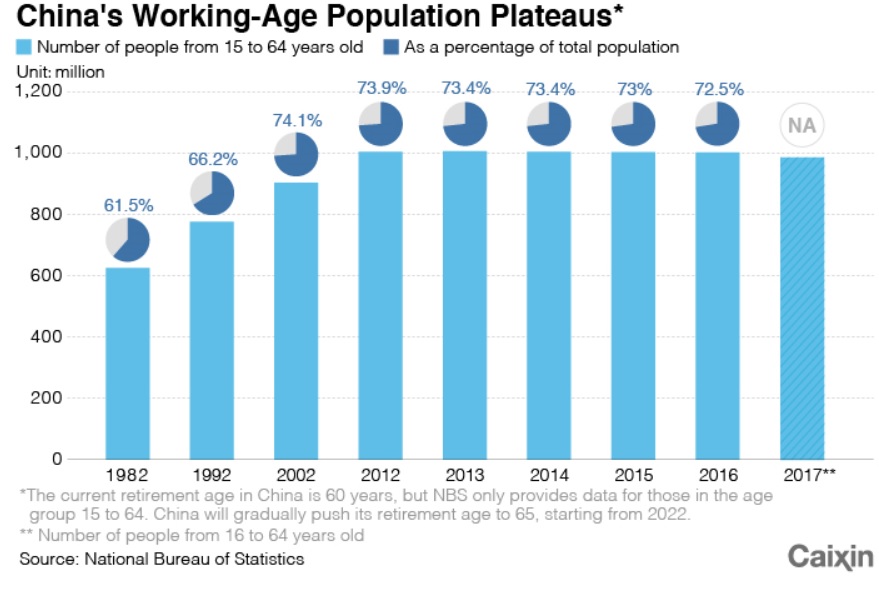 What are you Scared of?

Every year the powerhouse accounting firm PWC (who accidentally brought us the craziest moment in Oscar history last year), conducts a survey of CEOs around the world asking them a variety of questions about business conditions in their countries and other markets. This year CEOs are more anxious than in the past. The whole survey is worth perusing but we will concentrate on the question of which threats CEOs are most concerned about. It varies tremendously by region. In North America, CEOs are most concerned about cyber threats and over regulation. Asia-Pacific CEOs, on the other hand, are most concerned about availability of key skills, the speed of technological change and terrorism. Both Western Europe and Latin American CEOs top concern is populism, which says a lot about both places. In the Middle East, the top concern is geopolitical uncertainty. In Africa, it’s social instability. We feel some of these answers are different words for the same thing. But, nonetheless it is an interesting insight into different region’s CEO’s mindsets. We end by noting that humans are notoriously poor at assessing risk, so take the CEO’s opinions with a grain of salt like La LA Land producers should have at the announcement of their victory.

One of the modern day technophobia fears is that we are all alone too much. People don’t go out to the movies, the grocery store, the CD or book store. It can all be downloaded or delivered to your house, apartment or condo.  It is quite possible to never have to leave the four walls and a ceiling of your humble or expensive abode. Perhaps this is another reason why the U.K. felt the need to appoint a Minister of Loneliness. According to U.K. government figures, 9 million people in the UK are “always or often feel lonely.” That’s 15 percent of the population. In addition, “around 200,000 older people have not had a conversation with a friend or relative in more than a month.” It would be easy to mock the creation of a Minister of Loneliness—indeed it was our first instinct. But as our world increasingly resembles a Black Mirror episode, we refrain from such easy punches.