In what we don’t believe will serve as a useful metaphor of our world’s strange times, when we were filling our tank the other day at a gas station, a large white truck started to back into the pump position next to ours. But the driver of the Ford F150 kept backing and backing up and clearly did not see my car parked there. I began waving my hands and yelling “stop,” but she kept coming. I stepped towards her truck trying to get in her line of sight and kept up my shouting until finally she saw me and threw on her brakes, but not in time to stop her big truck from nudging into the rear-end of my car. She quickly pulled forward, and then leaped out of her car apologizing. I said it was okay, accidents happen, and we investigated the back end of my car, which fortunately showed no signs of damage. She continued to apology so profusely that I found myself trying to calm her down she was so upset at her carelessness. So come to think of it, this is definitely not a metaphor for our times. But it does remind us of our fondness for the coming age of self-driving cars, which leads us to examining the Innovation Index, contemplating who has the most satellites and heralding the most amazing autonomous technological breakthrough yet. It’s this week’s International Need to Know, navigating the world of international news and data with nary a bent fender or broken side mirror.

Is the Innovation Index Innovative?

Tis better to have loved and lost than never to have loved at all wrote ole Tennyson after losing his close friend Aaron Henry. Similarly modern economists and psychologists say it is better to take risks and fail than to be completely complacent, though none express it nearly as elegantly as a 19th Century poet. We kept this in mind when analyzing Bloomberg’s 2018 Innovation Index where once again South Korea takes the top spot, followed by Sweden, Singapore, Germany and Switzerland. Prinn Panitchpakdi, head of an Asian brokerage firm in Thailand, notes that “Innovation lags in countries where the culture emphasizes risk avoidance and where R&D is seen purely as an expense, not as an investment. That’s the mindset in Thailand.” Consequently you won’t find Thailand until 45th place in the rankings. They are so worried about losing, they aren’t loving. The U.S., for the first time, has fallen out of the top ten, though apparently not for lack of willing to fail but because our education system is not producing as many science and engineering graduates for the workforce as it once did. The index ranks countries in their innovativeness by scoring them on seven categories, including research and development spending, patent activity and high-tech density. We are not entirely convinced the index is an accurate ranking of the most innovative countries, but it’s an interesting benchmark to contemplate. As Tennyson wrote, “knowledge comes, but wisdom lingers.” 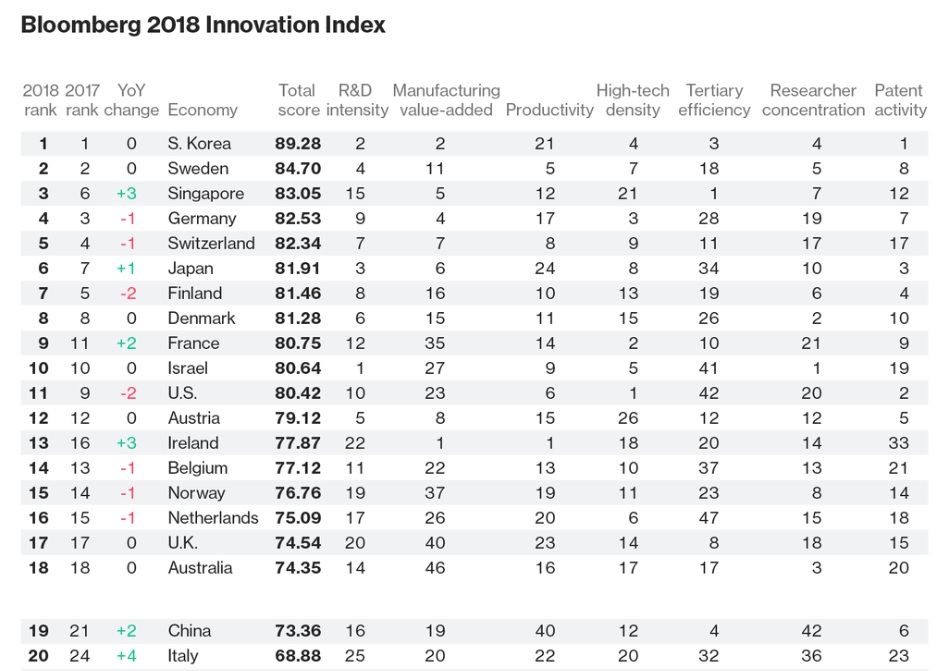 The Union of Concerned Scientists, who have no shortage of things to be concerned about nowadays, tracks the number of satellites currently in orbit around earth, of which there are more than 1000 total. You should not be surprised that the United States is by far the leader with 803, followed by China (204) and Russia (142). Of America’s satellites, 19.8 percent of them are for military use. For China, it’s hard to tell for sure from the data but conservatively at least 31 percent are military-oriented. And those crazy Russians?  At least 60 percent of their satellites are for military use. How many satellites each country has twenty years from now and what percentage of them are military will say a lot about these countries’ economies and the state of world technology. BTW, Direct TV, which has 10 satellites, has more satellites than most countries. TV!

In a week when many in America considered the state of the union, perhaps it is an appropriate time to step back and look at the big picture. And by that we mean the amazing breakthrough of self-driving slippers. Long time readers know of our affinity for self-driving cars, but who can doubt that an even bigger advance for humankind is autonomous nighttime footwear? It is, of course, no surprise that this kind of a technological breakthrough took place in Japan (number 6 on Bloomberg’s Innovation Index!) where a hotel offers slippers that roll on tiny wheels directly to wherever your feet are. No, really, check out the video below. Strangely, we take this as more evidence that autonomous cars will first be deployed outside the United States, probably in Asia. Developed by Nissan, the slippers are being used at an inn southwest of Tokyo with views of Mt. Fuji. We are, even as we type, working to make reservations there. So put your feet up, clad easily in your self-driving slippers, and enjoy our little world.

Age(ing) of China A Lost Generation, Are all Unicorns the Same Color, & Self-Driving Slippers:...
Scroll to top