We’ve noted our worries about automation displacing human jobs before, but it’s also possible that at least in the mid-term, the worries are overblown as we were reminded when reading an article recently that asserted truck drivers’ jobs would change, not be eliminated, with the advent of self-driving trucks. Of course, some jobs we may welcome the elimination of, perhaps because they are too dangerous or risky. Or in the case of the job we read about being at risk this week, too smarmy. Yes, it turns out lobbyist jobs are at risk to automation. According to Politico, the company FiscalNote has developed a software platform that is superior to humans at predicting what Senators and Representatives will do on an issue, who best to work with to form an alliance on a policy and how to get your bill through Congress, or alternatively, stop it from getting through the sausage making machine. The article notes that the “system analyzes interests, not just people, and quickly summarizes everything knowable about who is trying to pass what kind of rules about the most obscure topic…” FiscalNote is essentially bringing sabermetrics to politics. Of course, defense, corporate, environmental, human rights and all other lobbyists are likely to become the strangest bedfellows ever as they join together to lobby against the implementation of such technology. In the meantime, we manually inform you of a title change in China, the impact of smartphones on international trade and Venezuelan origami. It’s this week’s International Need to Know, telling different stories of import each week while the White House changes their story every day.

Titles are important to some people. I’ve known a number of people with PhDs who insist on being called doctor which is understandable given all the time and effort they put into earning the PhD. Chinese leaders can be very particular about titles because a title signifies much of importance. So we read with interest in Bill Bishop’s invaluable Sinocism newsletter the latest on President Xi Jinping’s title elevating efforts. Bishop reports that Xi now officially appears to be dubbed lingxiu, or “leader,” the first to receive that moniker since Deng Xiaoping and Mao. High level company indeed (and in Mao’s case, worrisome company). This moniker elevation first occurred in a January 14th article in the Global Times so we’re a bit late to the title party, but it doesn’t appear to be getting as much notice as say, Kim Jong-Un’s sister so we raise it here. As was noted in the article, “The word lingxiu means more than just a leader. It is often bestowed to a leader who enjoys the highest prestige, who is the most capable and who is widely recognized by the entire Party.“ That was January. Earlier this week the People’s Daily and CCTV published a video cementing Xi’s title which you can watch below. Over two years ago we noted that Xi is the most impactful Chinese president since Deng. Now he’s got the title to prove it.

A while back smartphones replaced computers as humans’ device of choice for distracting themselves from existential questions, bothersome family issues and having to engage in time-consuming human interactions, as you can see in the first chart below. The International Monetary Fund (IMF) has been quantifying how important smartphone production is to a variety of countries exports. For example, smartphones account for 5 percent of China’s exports, about $107 billion in 2016. In South Korea, smartphone component production accounts for an astonishing 17 percent of that country’s exports. For Taiwan, those germ incubators account for a third of its exports. Other countries heavily reliant on smartphones for their exports include Singapore (15%) and Malaysia (11%). The IMF study also notes that Apple iPhone release dates have a huge impact on these countries’ tech cycles. But the study also notes the smartphone market may be becoming saturated, perhaps peaking in late 2015. “China’s domestic smartphone market declined in 2017 for the first time, and Apple recorded a year-on-year decrease in iPhone sales in the fourth quarter of 2017.” This has led to smartphone exports from China peaking towards the end of 2015, at least so far. And, of course, some of that could be due to more components and assembly happening outside of China—Korea and Taiwan semiconductor exports continue to increase. We’ll keep you updated by looking up the latest data six months from now, on our smartphone, of course. 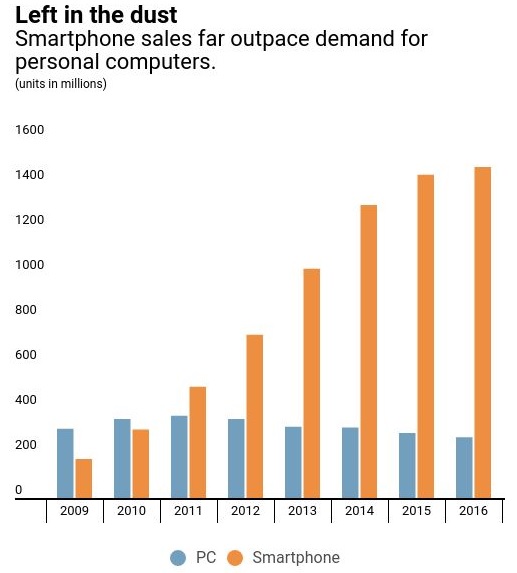 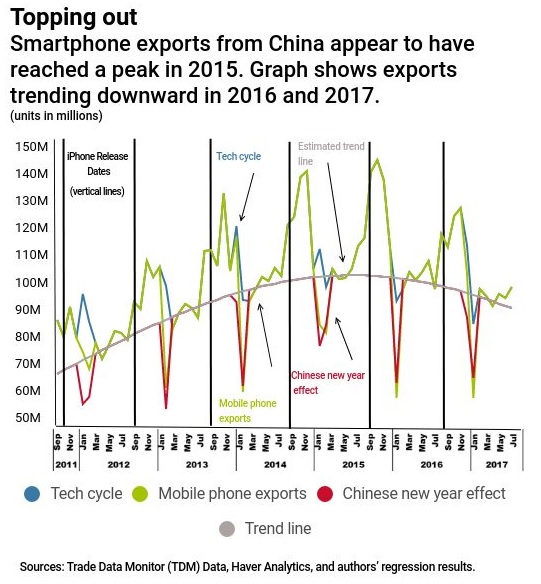 A few weeks ago we pondered whether Bitcoin is a legitimate currency or even a long-term viable form of payment. But now comes news that certain sovereign currencies are worth more by being used for other purposes than as money. In Venezuela, where the economy has shrunk 33 percent over the last five years and where this year’s inflation rate is currently 13,000 percent (that is not a typo!) lower denomination paper bills are essentially worthless. Well, as money at least. But one enterprising Venezuelan has been taking two, five and ten-Bolivar notes and using them to create handbags which he then sells for much more than the worth of the currency itself. As the Taipei Times tells us, “Enter Wilmer Rojas, 25, who scoops them up off the street, uses an origami-like folding technique, a needle and thread to make handbags with an eye to selling them — maybe even abroad, where people have real money.” Rojas says Venezuelans throw away such bills because inflation has made them worthless. He collects them, makes his handbags, sells them and provides for his family. “You can use magazine paper or newspaper pulp, but currency notes are better because they are not worth anything, they are all the same size and you don’t have to waste time cutting them,” Rojas said. International customers are paying him $20 per bag. If you find yourself in Venezuela, we highly encourage you to buy one. Maybe cat cryptocurrencies aren’t as crazy as we thought. 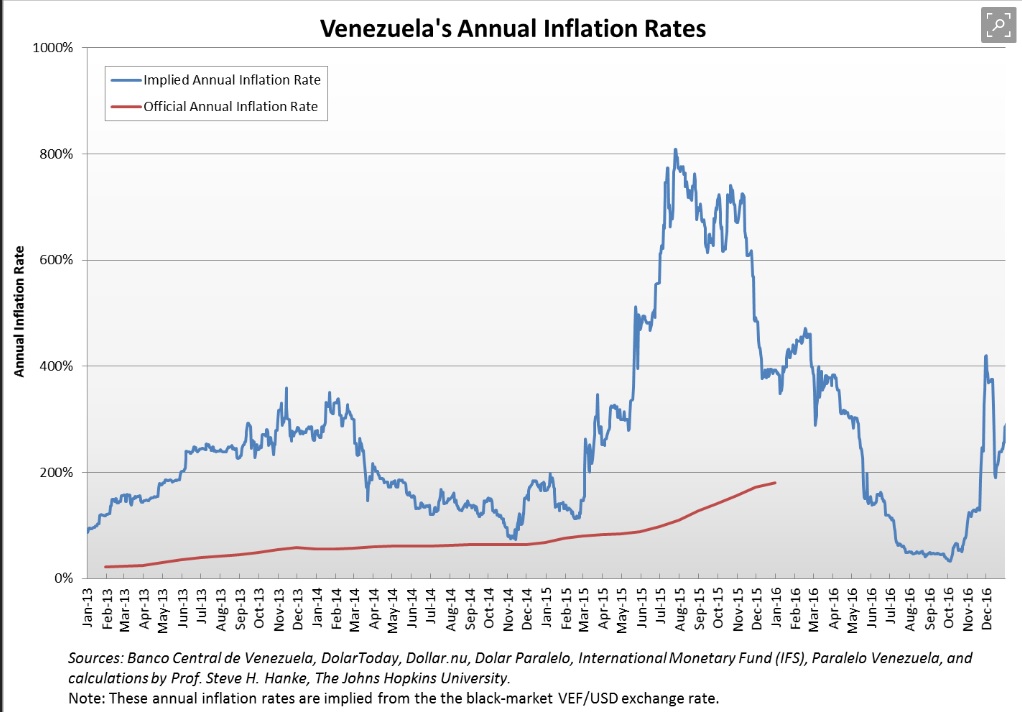