We apologize for not delivering key international information and data to your digital doorstep last week. Our knee, which was recently replaced, was in need of additional medical procedures, as pain and stiffness broke through established term limits like a Chinese president. Combine that with our brother’s wedding (congrats Joe and Linda!), and we found ourselves unable to make our usual weekly delivery. But we are still more reliable than the person who delivers, or rather doesn’t deliver, our daily local newspaper. It is a rare morning when the paper is at our house on time and too often it is not delivered at all. We have often reported these delivery mishaps but nothing seems to change. You are probably asking yourself why we still take the physical paper. We can offer no particular good reason other than old habits die hard and we like to read the physical paper while we eat our morning Cheerios (we are receiving no payments from General Mills for that statement though would gladly accept their sponsorship since we are even more addicted to Cheerios than we are to the physical newspaper). We figure our habit will forcibly end sometime in the next ten years when the delivery of physical newspapers will go the way of VCRs, cassette tapes and DJ Khaled (okay, this last is aspirational–please, please make this annoying man go away). While our newspaper delivery person starts looking for other positions where she doesn’t do her job, we spill the beans on Chinese fertility, solve the case of the missing salaried worker and determine where expats should live. It’s this week’s International Need to Know…

We admit to being a bit obsessed with demographics. Although almost all events and phenomena have a complicated set of causes, we think demographics is often not given a large enough slice of the explanatory pie (delicious when served with rationalization ice cream). So we read with interest a Bloomberg article detailing the continued fall in China’s fertility rate. After a brief spike following the relaxation of the one-child policy in 2015, the number of births in China fell 3.5 percent last year. That trend is likely to continue and China’s working age population—currently 902 million—will continue to decrease. In fact, China’s working age population has been decreasing since 2012. That means China’s GDP will stop increasing at such a high rate (remember GDP increases only through larger working age populations and increases in productivity), whether official statistics reveal this or not. And, as the Bloomberg article points out, China’s aging demographics could lead to a slow down in innovation. “Not only will there be fewer young people, who tend to have a higher appetite for risk than their elders, but they’ll be a minority in the work world.” Analysts will examine President Xi’s policies, U.S. trade policy and a host of other factors, as they should, but we wonder if China’s demographics will be more important than any of these other factors to the long-term trajectory of its economy.

The Case of the Missing Indian Salaried Worker

We are more dubious than some regarding the rise of the relative importance of large companies. Nonetheless, we do believe they should be a healthy part of the mix and in economies where rules, regulations and culture make life too difficult for the formation and growth of formal companies, people suffer. The India business publication LiveMint points out this is a problem for India where among developing countries, salaried employment, i.e., those working for companies rather than self-employed, is very low. In fact, India salaried employment is below 20 percent as you see in the graph below. At the other end, China has the highest percentage of salaried jobs, followed by South Africa, Malaysia and Brazil, all countries which have climbed up to the World Bank’s “middle income” category from “low middle income,” where India continues to reside. Many of the other countries with low levels of salaried employment are also struggling to achieve the middle income category. Self-starters are great, but companies are necessary for a successful economy. 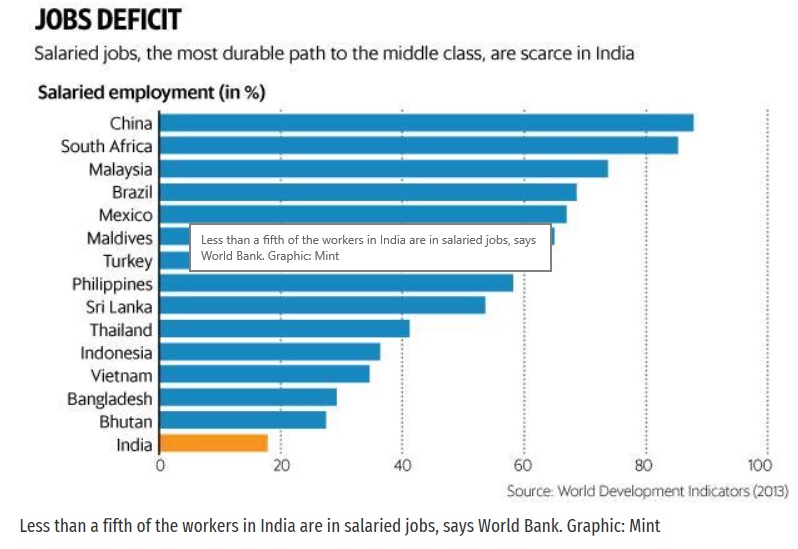 Where Expats Should Live

It’s common nowadays to hear people threaten to leave their country if one political outcome or another occurs. But where should they move? The ability to make money is certainly one factor. So in what cities do expats command the greatest salary? HSBC Expat provides the answer as reported by Bloomberg, and surprisingly, to us at least, it is Mumbai. Foreigners living in the Indian mega city earned on average $217,165, “more than double the global expat average of $99,903.” Why do expat jobs command such a high salary there? According to Dan Blackburn, head of HSBC Expat, the answer is high employment and experience levels and because a large percentage of the jobs are in engineering. We’re not sure we’re satisfied with that answer. The top four cities after Mumbai, as you see in the list below, are all high cost cities. In fact, other than Jakarta, all the cities near the top of the list have high costs of living. While we puzzle this out we suggest you request a transfer to Mumbai on the double. 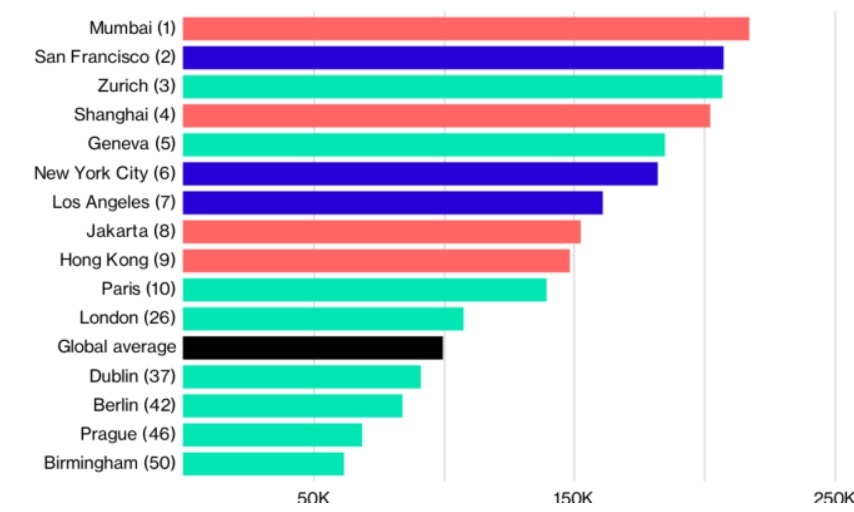