The great baseball player Ichiro and I share the same birthday and we–well, that’s in fact the only thing we share. With Ichiro returning to the Seattle Mariners this week we were reminded of our trip to Spring Training the first year Ichiro played for the Mariners way back in 2001. We were walking from the main stadium to a side field when we spotted Ichiro walking maybe twenty feet in front of us. Before we could enjoy our brush with soon to be baseball greatness, we heard a clamor behind us and were nearly trampled by a herd of Japanese media who also suddenly realized Ichiro was just in front of us and desperately wanted to capture the moment. That’s when we understood just how big a phenomenon Ichiro was in his home country–and how unimportant our health and safety was to their media. And yet when we read the extraordinary article on ESPN this week detailing the circumstances, traits and tragedy that made Ichiro great, we are now glad a birthday is the only thing we share. The article is a profound examination of obsession, loneliness and child abuse. We have always rooted for Ichiro and will continue to do so this spring though not just for him to get hits, but also to someday find peace. And we find peace in the fact of good news in our world, make a pitch for this whole China and commodities business and cheer on changes in the Middle East. It’s this week’s International Need to Know going to bat for important international information and data.

You, dear readers, probably feel you are being inundated with bad news these days.Turn on the TV, pick up your tablet, listen to the radio and you’ll see and hear it. But we have experienced just the opposite. In the past week we have learned of two new books and one graphic quantifying how good we have it. We read a long review of Steven Pinker’s new book, Enlightenment Now, which spends many pages explaining how the world has gotten better and likely will get better yet (though apparently Pinker gets wrong why the world has gotten better–the Enlightenment is not the answer, or at least not all of it). We listened to an interview with Gregg Easterbrook whose new book, It’s Better Than It Looks: Reasons for Optimism in an Age of Fear, which as the title indicates, is also about how things are getting better. And we stumbled across the graphic below, which in six graphs shows how our crazy world has improved. And indeed we have many times tried to convince you of the same thing in this space. However, that there has been lots of progress in the past does not mean bad news is not coming. In fact, the worry is that over the last few years there are signs we are regressing, that perhaps we have reached an inflection point, where the world is taking a turn for the worse, and this could be the start of a long term bad trend. Perhaps. But ones hopes not and even if so one should fight against the possible trend.  And in the meantime recognize we live in the most prosperous, peaceful time in human history and let’s work to make it more prosperous and peaceful for even more people. 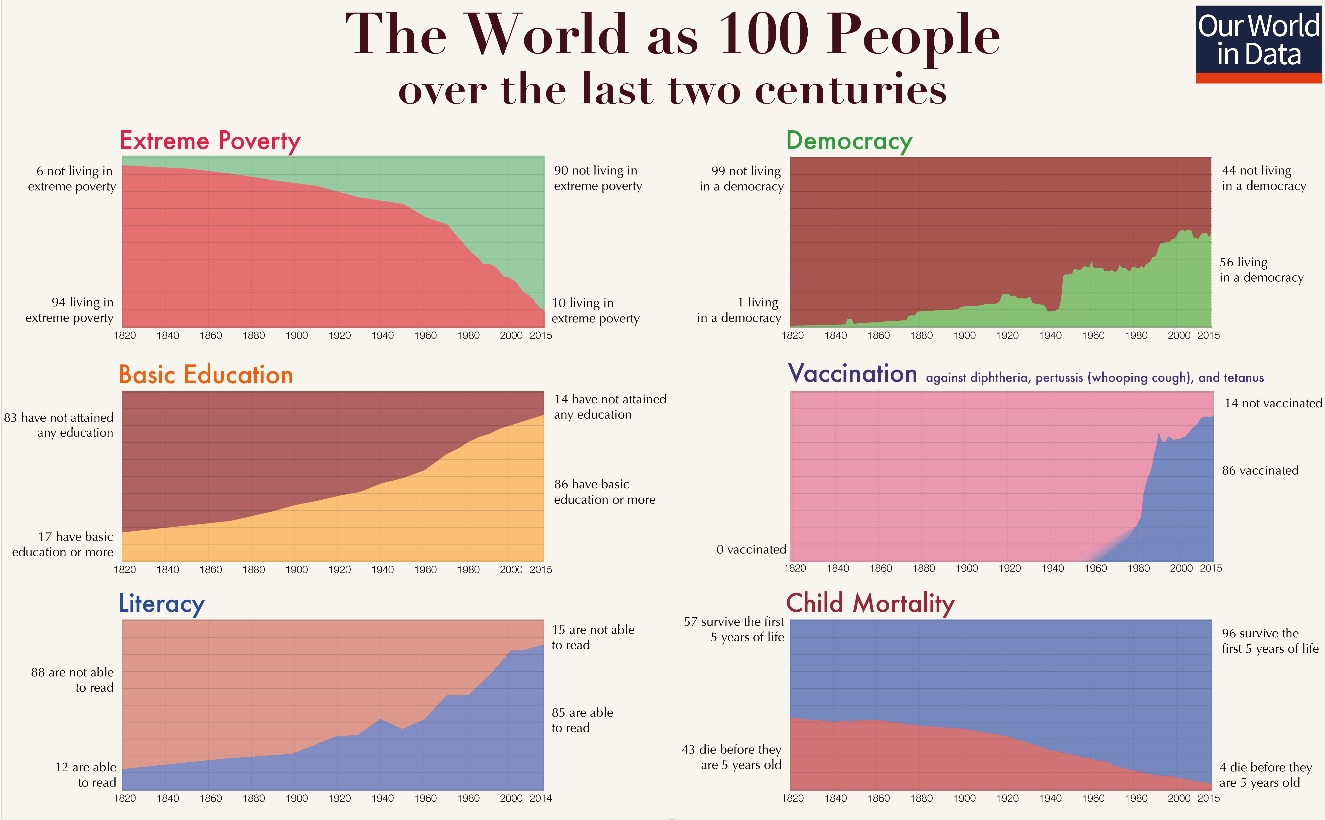 For some reason steel has been in the news recently, something to do with tariffs some old man wants to impose. Forgetting for the moment that the said tariffs, for mysterious reasons, are more targeted at Canada, it seems a good week to remember the large effect China has on the commodity market. And fortunately the Visual Capitalist provides a nice graphic (see below) to capture this outsize influence. China is home to 19% of the world’s population and its economy accounts for 15 percent of the global economy. But because of its massive infrastructure build up, China is responsible for 50 percent of world steel demand, 59 percent of cement, 50 percent of copper and 56 percent of nickel. A few years ago when China’s economic growth slowed, commodity prices dove. If China slacks off again, be prepared for the same result. The U.S. great leader’s tariff tantrum is silly and counterproductive (though not unprecedented, George W Bush did something similar), but ultimately the steel story will be told by China’s policies, economy and politics, not by one country’s tariffs. 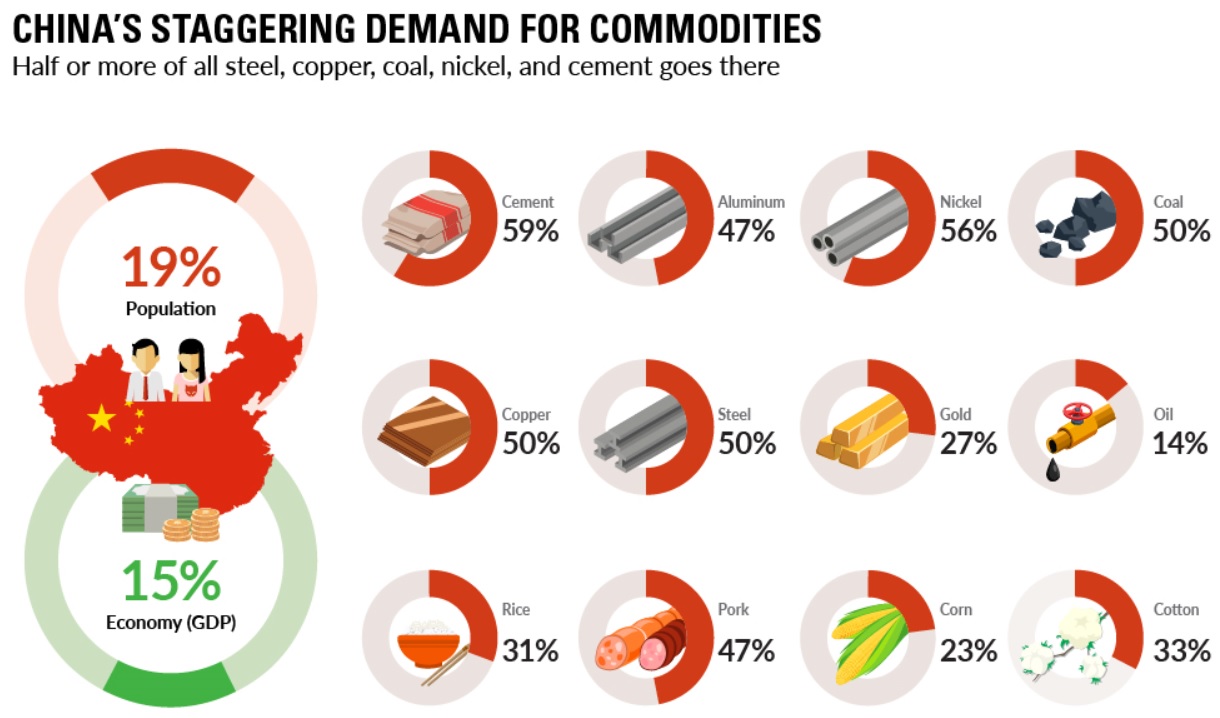 Changes in the Middle East

Bad news is loud and brash and stomps all over the place which is why the quiet, demure, small steps of progress that have taken place in the Middle East recently may have gone unnoticed. Earlier in the year to great note, Saudi Arabia announced women could start driving. But recently Saudi women also gained other basic freedoms, including serving as soldiers, expanding the number of types of jobs they can work at (sales most prominently) and being allowed to attend soccer matches. Small steps as we noted but at the moment at least the country, under the heavy handed consolidated ruler Prince Mohammed bin Salman, seems to be walking down a more liberal path. And it’s not just Saudi Arabia. Iran recently told the soccer governing body FIFA they will soon also allow women to attend soccer matches. Let’s hope the good news keeps coming.