It’s the 50th anniversary of the assassination of Robert F. Kennedy. I’m neither an aficionado of Robert Kennedy (or any other Kennedy for that matter) nor a hater. But I did read this week a remembrance of Kennedy by Conor Friedersdorf, and like most articles about Kennedy this week, it was full of what ifs, as in what if someone had not shot and killed Kennedy in a hotel in Los Angeles the night of the California Primary. But that was not what struck me in reading the article. No, what was remarkable was how the many excerpts of Kennedy’s speeches sprinkled throughout Friederdorf’s long piece, show how much political discourse has degraded over the last fifty years. We are far dumber speakers than we were half a century ago. And I don’t merely refer to our current dumb discourser in chief. In a speech to a black audience the night Martin Luther King Jr. was assassinated (tough year that 1968), Kennedy quotes an ancient Greek poet: “My favorite poet was Aeschylus. He wrote: ‘In our sleep, pain which cannot forget falls drop by drop upon the heart until, in our own despair, against our will, comes wisdom through the awful grace of God.’” Can you imagine any politician quoting an ancient Greek poet today? Or using the elegant, literate language found in the other speech excerpts quoted in the article?  Never mind what side of the aisle you are on or what you believe about any particular issue. We have dumbed down our public discourse and we wonder whether that has led to many of our other problems. We talk dumb and so we act dumb. Or, is it the other way around? As we study up on poetry, ancient and modern, we present a wealth of information on wealth, contemplate who takes the most drugs, and write up the most distressing topic we have ever presented in this space.  It’s this week’s International Need to Know, dreaming of Aeschylus as we serve up the international equivalent of limericks.

A Wealth of Information

The world continues to become more wealthy though perhaps it is not as evenly distributed as some would like. The annual AfrAsia Bank Global Wealth Migration Report shows that in the last year wealth grew 12 percent worldwide to US$215 trillion. India saw the fastest growth in wealth at 25 percent followed by Malta, China and Mauritius, of all places. According to the report, “Growth rates in Malta, Mauritius, New Zealand, Israel, Australia, USA, Luxembourg and Switzerland were all assisted by the ongoing migration of wealthy people to these countries.” Who did the worst? Pakistan, Nigeria, Venezuela and Turkey lead that dubious list. The reasons for the poor performances differ with Venezuela due to the continuing meltdown of the economy and in Turkey due to a lack of investment over concerns about their political and media crackdown. Over the last decade, the top country for accumulating wealth is Vietnam. We visited there a number of times the last ten years and are not surprised by this young, dynamic country’s performance. The report is chock full of interesting and in some cases surprising information. So much so, that we’ll delve further into the report next week. 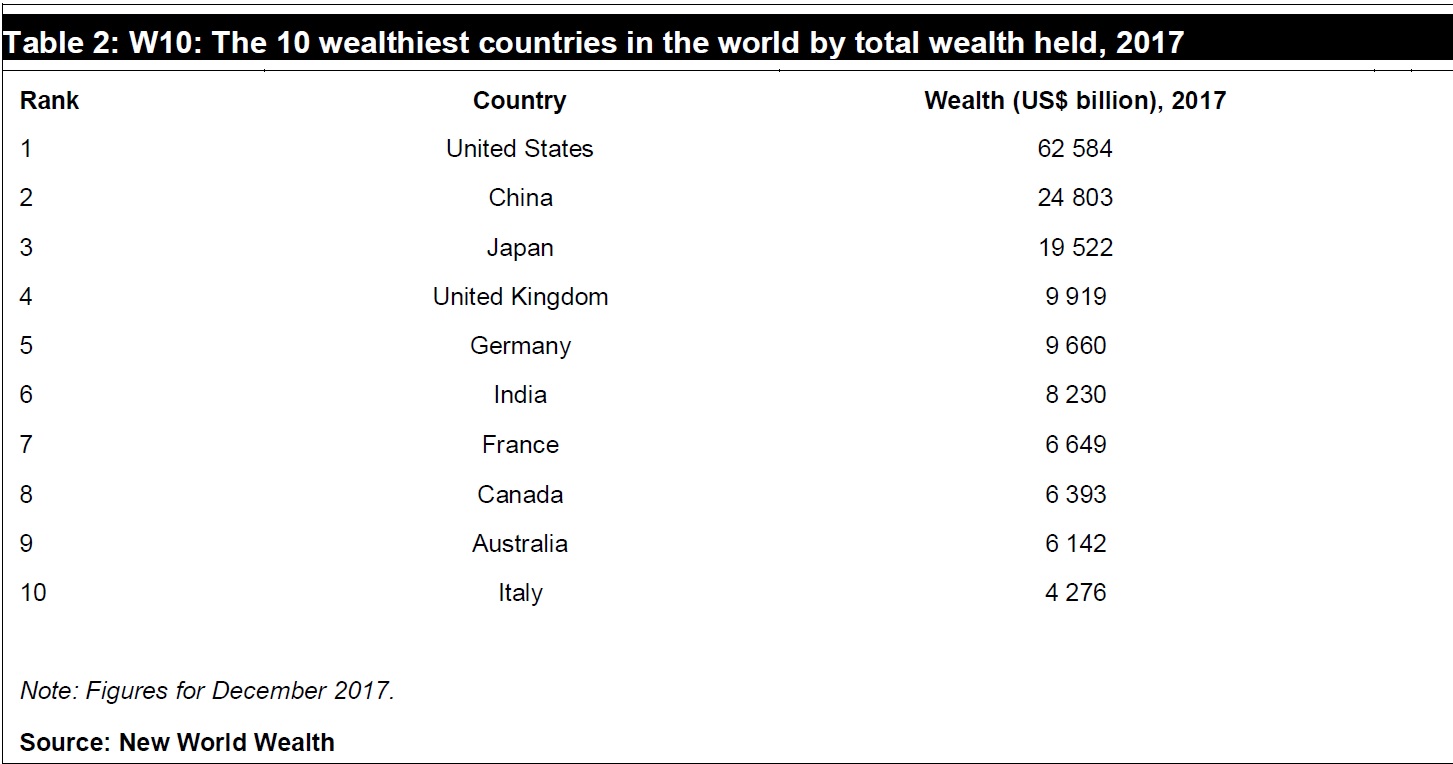 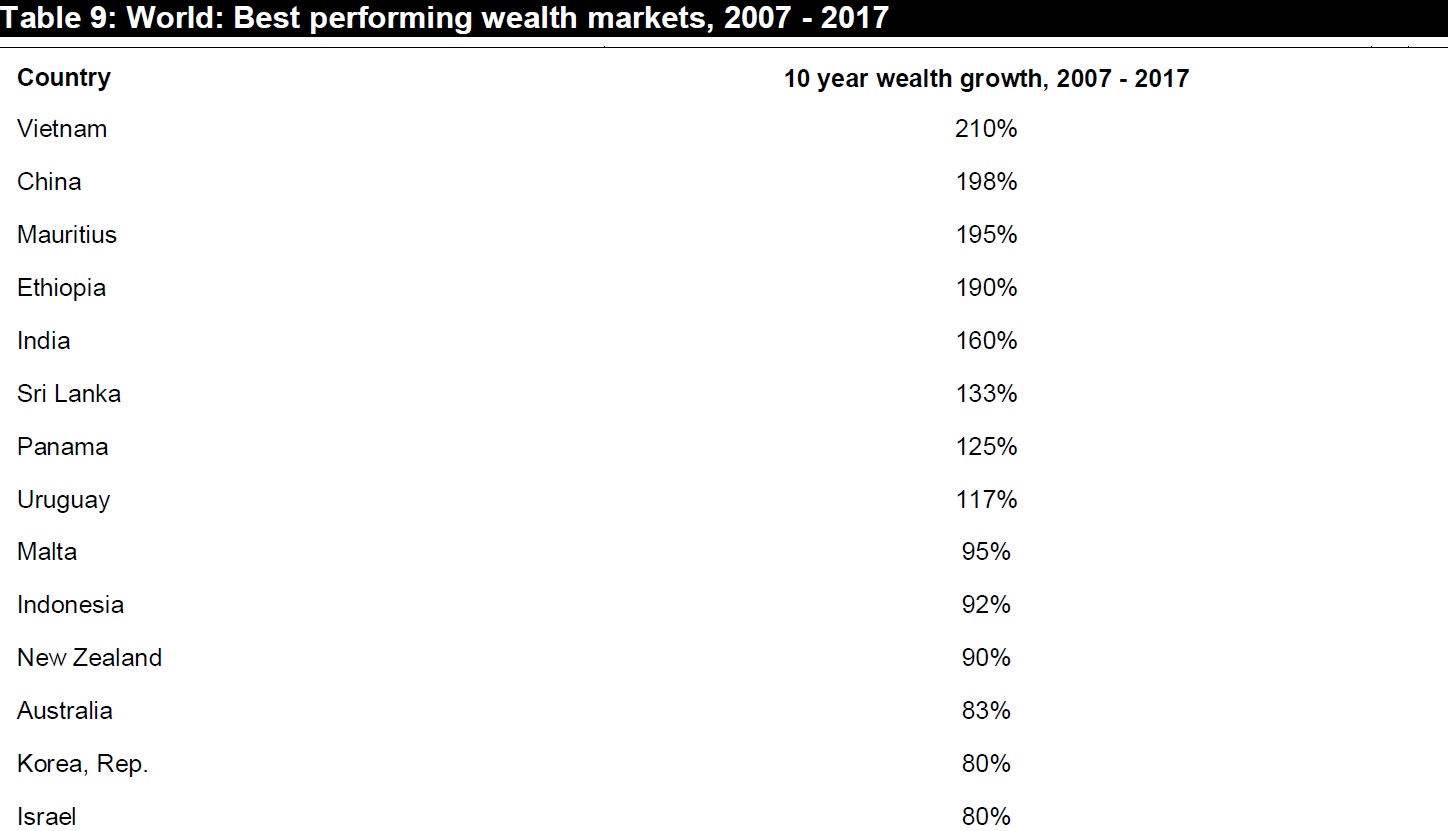 The World is a Drug

As we rode our bike for the first time since our multiple knee surgeries, we had to navigate around the shoals of drug dealers and users populating the Interurban Trail. They eyed us and others on the trail suspiciously as if we were trespassing on their land.  It was a bit disconcerting since in our current physical state neither flight or fight is a particularly good option. Of course, drug abuse is not just a problem in Seattle, or even in the United States. In fact, the population with the highest rate of abuse is in Russia. Ukraine and Belarus also have relatively high percentages of their populations abusing drugs and alcohol. So too does the rough and tumble Greenland (Clearly Trainspotting 3 should take place there). In Russia, alcohol is the predominant drug problem which we witnessed first-hand ten years ago while spending time in the Russian Far East seeing young men drinking from bottles of vodka at ten in the morning. Of course, as with many challenges in our world, it is men who rear their glazed-eye heads. As Our World in Data notes, “Substance use disorders are more common among men than women. This is true across all countries, as shown in the (second) chart below which plots the share of males with a substance use disorder versus the share of females.” What ails the men of the world, and is there a drug for it? 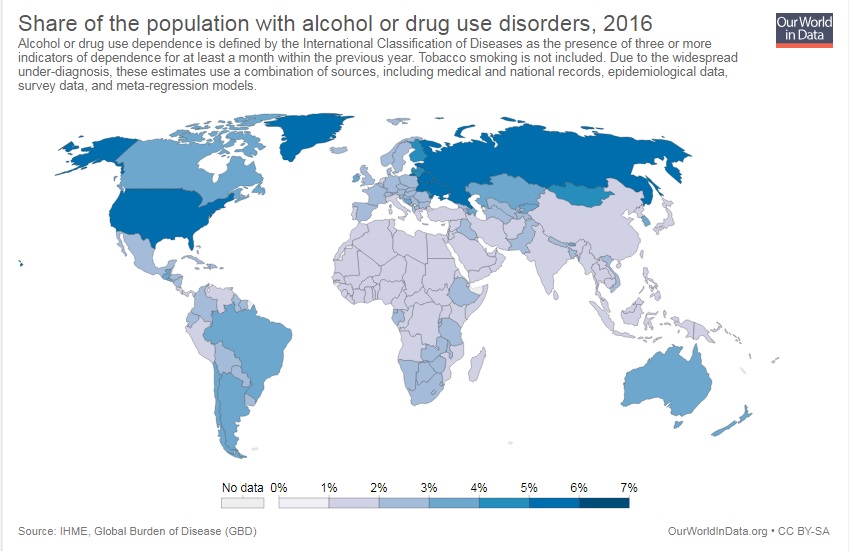 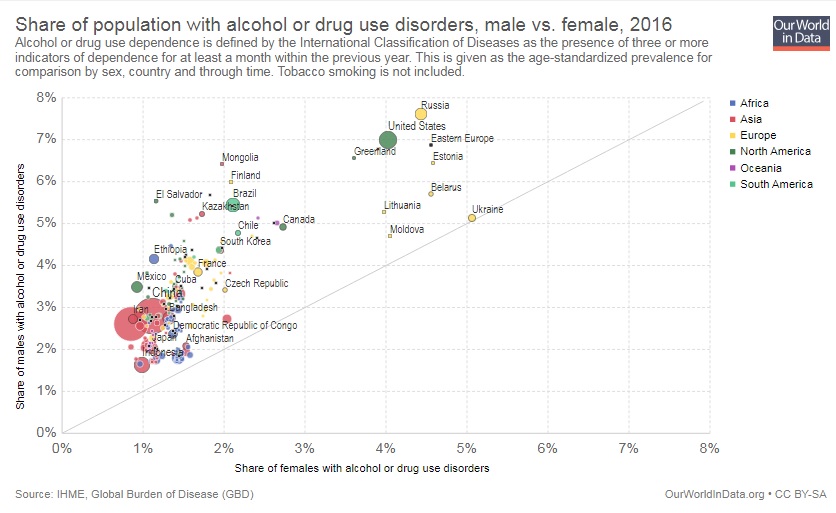 There’s no doubt the world is in a foul mood these days with people plenty worried about the future. For some their visage is darkened by fears of climate change. Others worry about the possible arrival of our robotic overlords. Still others remain deeply concerned by the world’s apparent turn from liberal democracy to authoritarianism. But for us, nothing is more dystopian than cockroach sushi–which we’ve recently learned is a real thing in China. We vowed to start fasting when we read in the South China Morning Post of the rapid increase of cockroach farms and factories in China. “The number of cockroach farmers in Shandong alone has tripled to about 400 in the past three years, according to Liu Yusheng, president of Shandong Insect Industry Association and an entomology professor at Shandong Agricultural University.” Good God, there were already 133.3 cockroach farmers in China in 2015?!!! The article then goes on to describe a new facility where literally billions of cockroaches are born and bred, and it’s not a 1970s walk-up apartment on the lower eastside of Manhattan. In addition to eating the cockroaches, China is also using the insects to eat up the enormous amounts of food waste in the country. “Cockroaches devour virtually everything, and can consume food weighing up to 5 per cent of their own weight each day…There is no better way of processing kitchen waste than feeding it to cockroaches,” says cockroach researcher Li Yanrong. As we type, a new facility is being built that can breed 2 billion cockroaches each year, “powered by artificial intelligence and big data.” What could go wrong? This my friends, is dystopia.

*This is the most horrifying headline we’ve ever written 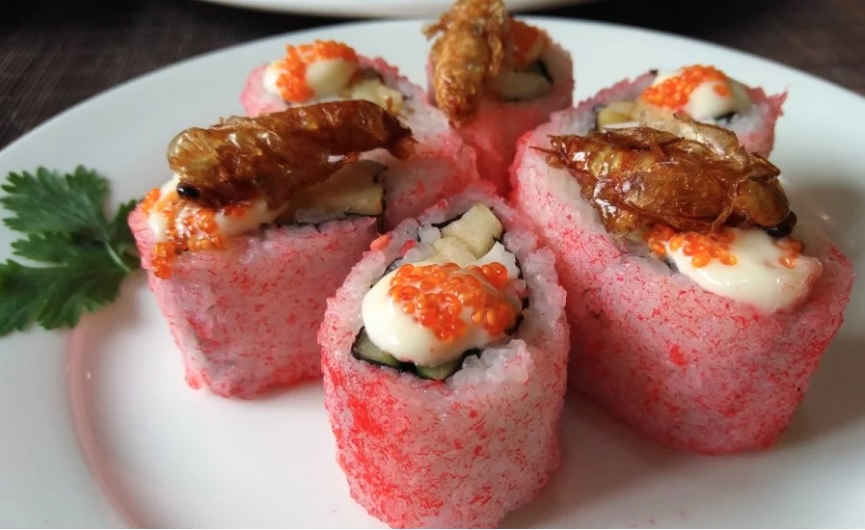