Our thumb is not green, it is not even chartreuse. But we are an admirer of dahlias and a friend of ours, who is a master dahlia grower, kindly provided us some plant shoots of our own this week. They have distinguished lineages, sort of like a race horse, making us nervous that if we mistreat them we will commit the equivalent of killing one of Secretariat’s foals. But plant them we did. Tenderly. Carefully. Following all directions. We were tempted to speak a few encouraging words to the plants but what little dignity we have reared its decorous head. So imagine our horror when the next morning the INTN spouse came in from our front yard and reported, “The dahlias look dead.” We quickly went to inspect them ourselves and they were indeed quite wilted, the dahlia equivalent of Charlie Brown’s Christmas tree. We emailed our friend, the Dahlia Master, and she assured us they will be okay. So as we weed out a Charles Dickens story in China, water North Korea’s future with comparisons to East Germany, and fertilize global warming with air conditioning, we hope you will send nurturing thoughts for our three dahlias. It’s this week’s International Need to Know, a blooming garden of international information and data in a less than concrete world.

Whether you are a racist lawyer, violent cop or unruly sports fan, in our new recorded age, it is increasingly difficult to get away with bad behavior. China, of course, is taking it to a new level with their Social Credit System. You remember reading about it last year, right? How’s it coming? The state-run Global Times reports that since April, Chinese citizens have been blocked from taking 11 million flights and 4.25 million high speed rail trips due to miscreant behavior of one type or another. The nascent system is currently built on a series of black lists where unfortunate (or deserving) citizens find themselves punished for misbehavior such as acting badly on a train or flight (we have long advocated for replacing TSA security lines with clothing monitoring lines—you are not allowed to sit on an airplane seat if you are wearing pajamas, short shorts or a stained sweat suit, for example). Much of the Chinese focus is on debt. Debtors names are published on websites and not allowed to fly or stay at fancy hotels. One province goes one step further. They “play a recorded message when someone tries to call a blacklisted debtor, informing the caller that the person they want to speak with has outstanding debts. And in May, a short cartoon with the photographs of debtors’ faces began playing at movie theatres, on buses, and on public noticeboards with a voiceover that said: ‘Come, come, look at these [debtors]. It’s a person who borrows money and doesn’t pay it back.’” No word on what happens to provinces themselves that are in debt. In the meantime, we await China’s Dickens to chronicle their experiment.

In the fanciful game of diplomatic beer pong being played on and with the Korean Peninsula, it is anyone’s guess what happens. But should the two Koreas ever reunify, it is safe to say that many decades will pass before there is a true equilibrium. Germany has spent upwards of 1.7 trillion Euros on its reunification and yet economic, social and cultural differences remain between Western and Eastern parts of the ole Deutschland even 30 years later. Stubborn cultural differences are revealed in a new paper which shows East Germans are much less likely to invest in the stock market than West Germans, even when controlling for income and other factors. And when they do invest, they are more likely to hold stocks in companies in communist or former communist countries such as Russia, China and Vietnam. The paper’s authors note that this inclination is stronger in parts of East Germany that did not have access to Western media. The authors conjecture this is a result of ubiquitous and effective propaganda (see Soviet ad below) up through 1989. We are all hostage to our biases influenced by whatever environment we grew up in. It is a sobering thought which causes us to reach for our Weisen beer. 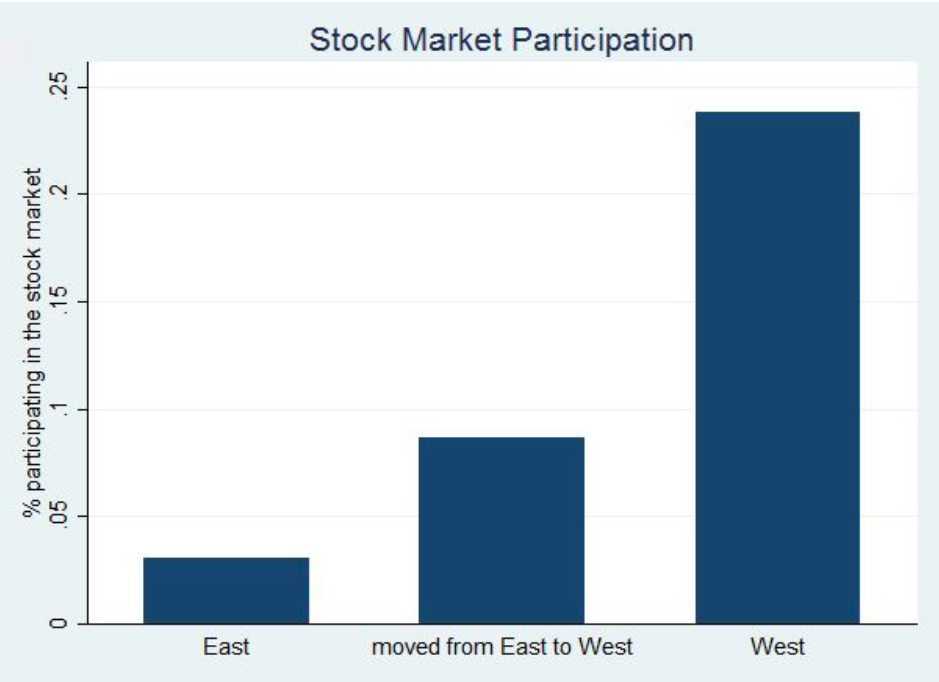 Heating the Planet by Cooling Off

We recently, when having our furnace replaced, had central air conditioning installed. It’s fantastic although our cat Willow who loved sitting on a vent when hot air blew out, was very confused, upset and startled to have cool air disturbing her ample and yet cute stomach. Areas of the world that most need air conditioning, however, are least likely to have access to it, as you can see in the chart below. India, Africa and parts of Asia usually do not have air conditioning. In fact, as Quartz notes, “328 million people living in the US consume more energy for cooling than the 4.4 billion people living in all of Africa, Latin America, the Middle East, and Asia (excluding China) combined, according to the IEA report.” But as wealth grows, that will undoubtedly be one of the first things added to commercial and residential buildings, freaking out felines the world over. But that means electricity use will go up with corresponding increases in greenhouse gas emissions. Air conditioning needs to be installed in the developing world for health and productivity reasons. But so too do clean energy sources. Fortunately, those are coming along rapidly. 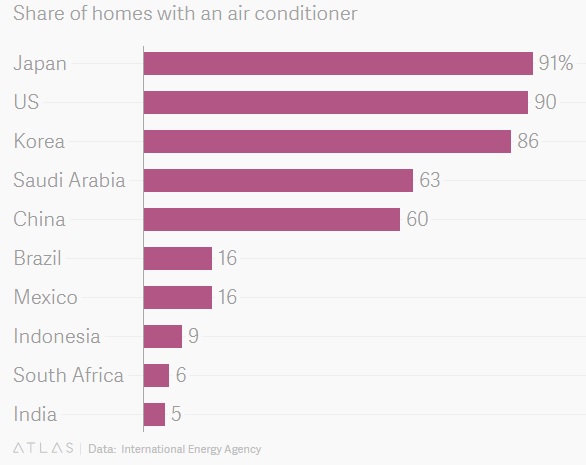 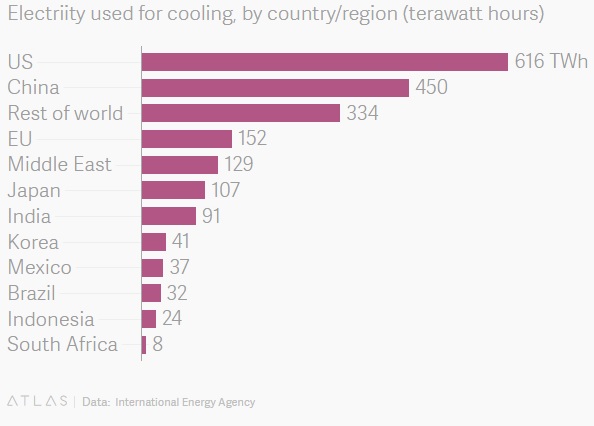 Coming to China, What are You Worried About and Chinese Nicknames A Wealth of Information, World is a Drug and Cockroach Sushi
Scroll to top