We realize we live in an age where people, including presidents, assert up is down, down is up and cages are chain-linked fences, but nonetheless we rage, rage against the dying of the light of truth, as Dylan Thomas’ ne’er-do-well cousin might write. While stuck in Seattle’s increasingly bad traffic (this is a fact), we listened to someone on the radio discussing Seattle’s expanding homeless problem (also a fact though what to do about homelessness is more complicated) note that the homelessness problem is leading to an increase in crime (not a fact). The news media continues to cover crime like it’s a crisis. But as Kevin Drum points out, it’snot. Crime rates in Seattle, and just about everywhere, are down. Murder, rapes, robberies, assaults, burglaries, thefts, auto thefts and arson are all down from past years. Way down from ten years ago and way, way down (excuse the technical statistics term) from twenty and thirty years ago. Seattle, the United States, much of the world, is far more safe than in the past. And yet we act and talk as if it’s the opposite. Certainly the U.S. president does so for political reasons, it’s advantageous to him if we are scared. What’s the rest of our excuse? As we walk in the park late at night, fearless and confident, we examine all the beer in India, worry about the great separation in China and consider TV versus the Internet. It’s this week’s International Need to Know, avoiding baseball mascots so we can safely bring you news of the world.

*Note we have late breaking news that we could not fit into this week’s edition, but look for our favorite story of the year next week.

All the Beer in India

We are not as worried about climate change as some people. Not because we don’t think it is happening or because we are unconcerned about its effects but because we observe increasing evidence we are going to solve this large problem. Case in point, Anheuser-Busch is starting to brew its beer in India using solar power. According to Quartz, “Anheuser-Busch’s Mysuru plant that brews Budweiser beer will soon be powered up to 80% by solar energy, making it the company’s third facility globally to run on renewable power.” In fact, the world’s largest brewer said late last year that by 2025 it plans to produce all of its beer using solar power. Now if they could only brew beer that’s worth drinking. The point is, of course, that no matter how the U.S. government or other government’s change policy, in the mid-term technology is making renewable energy more affordable than polluting energies. Industry will gravitate to these sources. Now the mid-term may be too long to prevent some of the effects of climate change gas emissions. Ice is already melting rapidly in Antarctica, for example, which will lead to seas rising sooner than anticipated. People are right to be alarmed at the specter of climate change. And we’re worried too but heartened that Canadian scientists have developed a technology that allows them to capture carbon at a cost of $94 per ton (time to impose tariffs on Canadian scientists). At that price they use the captured carbon to produce fuel at $1 per liter, according to the research published in the scientific journal Joule. Climate change is real, its effect possibly devastating, but there are solutions on the way. We don’t advocate complacency but we keep at least one eye on other worries for which there are not yet solutions coming down the pike. 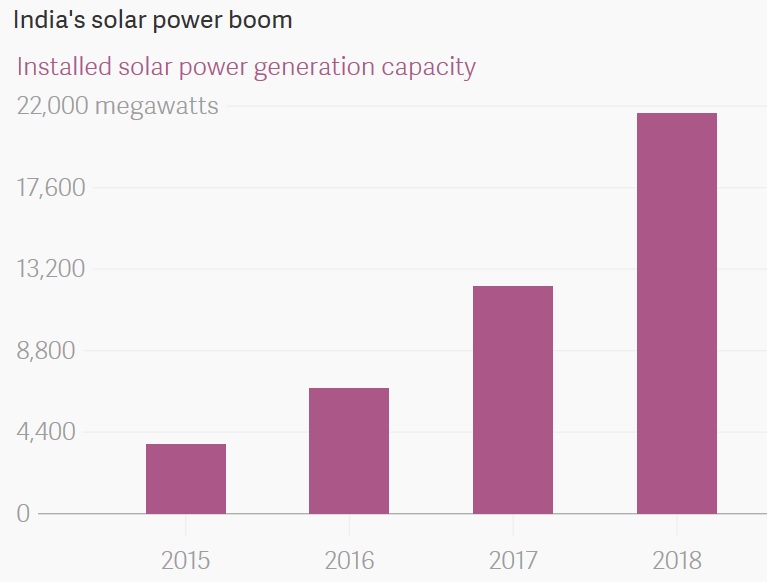 China is an amazing place and it deserves praise and notice for its economic development that has lifted hundreds of millions of people out of poverty the last thirty years. But China also has  faults and challenges and one that is not receiving enough attention is its treatment of Muslims. A scary and sobering post in The Interpreter, a publication of the Australian Lowry Institute, details the apparent building of concentration camps for Muslim minorities throughout the far west of China. The article claims “recent research by a handful of academics and journalists has meticulously documented the construction of a vast network of “collective re-education centres” across Xinjiang.” The article cites a variety of other research documenting the camps and the abuse of Muslims. We now have a handful of accounts about life inside Xinjiang’s secretive gulag, where detainees are subjected to around-the-clock political indoctrination and forced to denounce their culture and religion. Omir Bekali was detained without a legal warrant and held for eight months in a squalid, overcrowded camp in Karamay. After his release, he told AP News that he was placed in solitary confinement, physically tortured, and deprived food.” This is not something we have tracked very closely–there is limited attention spans for outrages and more than enough outrageous behavior to go around, but this one deserves more of our attention.

We end on a slightly lighter note. Or do we? It depends on your view of TV and the Internet, I suppose. According to the media agency, Zenith, which tracks these things, next year for the first time the world will spend more time on the Internet than watching TV. Personally, we’ve been doing that for years, though sometimes we do both at the same time, especially when watching sporting events. So the world is catching up with us. “People will spend an average of 170.6 minutes a day, or nearly three hours, using the internet for things like shopping, browsing social media, chatting with friends, and streaming music and video in 2019, a recent report by media agency Zenith estimated. That’s a tad more than the 170.3 minutes they’re expected to spend watching TV.” The Internet already rules over what once was derided as the Idiot Box (and yet the reverse Flynn Effect–IQ scores going down–didn’t occur in the age of television but only now in the Internet age)  in Asia and the Middle East but still lags far behind in Latin America and Western Europe. Europeans and Latinos clearly need to watch more cat videos. 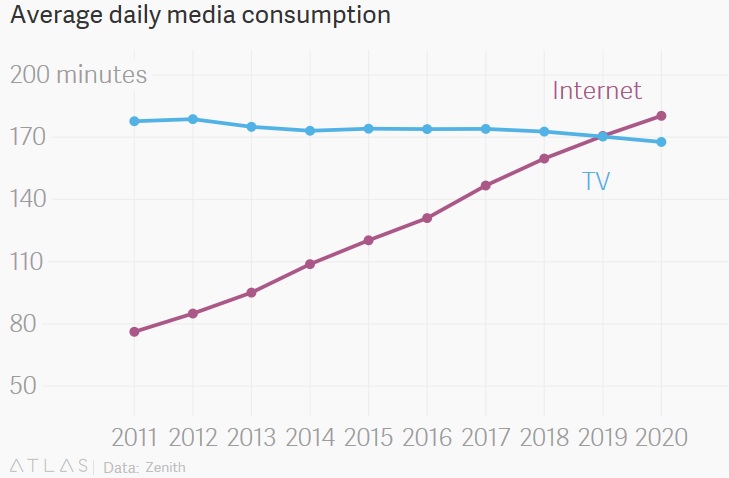 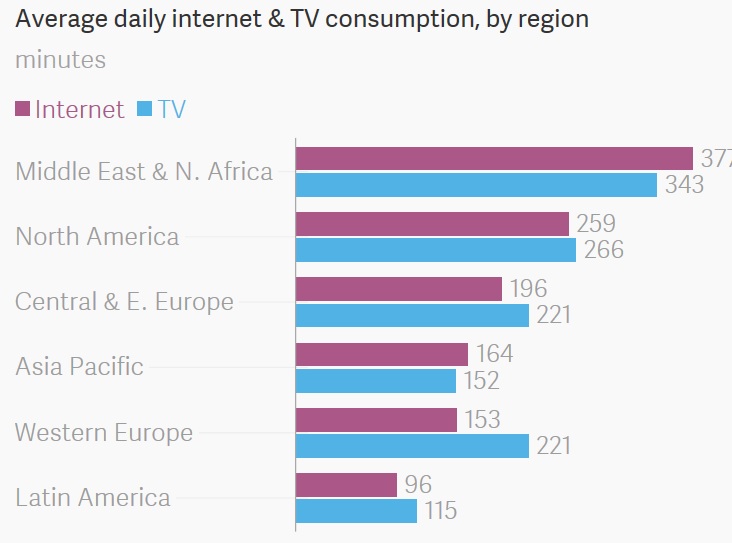 North Korean Three, More on Wealth, Buy Me a Beer Accelerating into the Future, No Man is an Island and Our Favorite Story
Scroll to top