A few years ago a friend of ours posted a video on Facebook of their then young daughter playing the drums. At one point, the delightfully cute girl does a complicated riff and then flashes a smile at her Dad holding the camera, pleased at pulling off the complicated percussion maneuver. We were reminded of this watching the viral video earlier this week of young miss Yoyoka Soma playing the drums to Led Zeppelin’s “Good Times Bad Times.” Yoyoka, who was competing in the 2018 Hit Like a Girl contest, a percussion competition designed to encourage little, old and every other type of drummer girls. Yoyoka, as you see below, is a remarkable drummer, especially for an 8-year-old, but really she bangs the drums well for anyone of any age. John Bonham, the late Led Zeppelin drummer, is her idol. Yoyoka is already able to drum like Bonham, seems to be much better emotionally, and is on her way to becoming a worldwide sensation despite the fact she did not win the contest (??!!!!–hard to imagine someone better than her). The future is in good hands, or at least the future of drumming. Meanwhile, Yoyoka’s crazy good riffs inspire us to examine how the U.S. has created a time machine to the future for China, worry over Saudi Arabia’s hate canal, and present you with our favorite story of the year. It’s this week’s International Need to Know, deciding international cases of international information and data with Solomonic-like judgment.

In honor of America’s Independence Day Celebration, INTN will be off next week marinating a variety of international data to throw on the grill and shooting off fireworks of international information that will land on your laps on July 12th. Be prepared for the international BBQ of your life.

Accelerating Into the Future

Many have forecast that as the 20th was the American Century, the 21st is likely to be the Chinese Century. Although we are nearly a fifth of the way through the 21st (yikes, how did that happen?), most felt China would not solidify its leadership until perhaps the 2040s or 2050s. But the current U.S. president’s actions to upturn the global order are accelerating us into the future Marty McFly-like (with hair eerily similar to Doc Brown’s). We have new evidence of the China Power Acceleration (CPA). According to the South China Morning Post, “China and the European Union will set up a working group to revamp the World Trade Organisation to counter US unilateralism.”  Whether this working group can be successful, given the EU has the same concerns about China’s protectionism and closed markets as the U.S. does, is an open question. But the fact that the EU and China are trying is remarkable and would have been unthinkable before the U.S.’s recent trade skirmishes with both regions. Meanwhile, a retired major general in the Chinese army during a panel discussion on the South China Sea called for a rewriting of the international based order to accommodate China’s growth. The article says the Major General claimed “the shortcomings of the rules-based order was they either had limited capacity to accommodate China’s growth or China’s rapid rise meant it had outgrown the rules.” She went on to say, “We and other players have to think of a way to fix this rules-based order to update it.” And finally, in a major foreign policy speech, President Xi said China will “advance power diplomacy” on its own terms.  Like continental drift or losing a sock in the laundry, China’s ascent was inevitable. But U.S. political and policy chaos is an earthquake or dropped laundry basket accelerating it.

No Man is an Island, but a Country?

You may remember that Saudi Arabia has been in a simmering conflict with its neighbor Qatar the past year over a number of issues. That has been covered in the news numerous times. But you may not know that Saudi Arabia is so upset it has plans, in fact is taking bids from private companies, to build a canal on its 38-mile border with Qater and turn the isthmus into an island. According to Business Insider, “reports indicate five international companies have been invited to bid for the project, called the “Salwa Channel,” with a deadline set for Monday. Sources told Makkah, a Saudi Arabian newspaper, that Saudi authorities will announce the winner of the contract deal within 90 days, and hope to complete the canal by the end of the year.” That’s definitely upping, or rather uprooting, the stakes of the Saudi cold war with Qatar. Perhaps more alarming, the Makkah newspaper further reports that “part of the canal would also be converted into a military base and a nuclear waste burial site.” Saudi Arabia is literally trying to turn Qatar into an island with a moat of nuclear waste. Stay tuned. 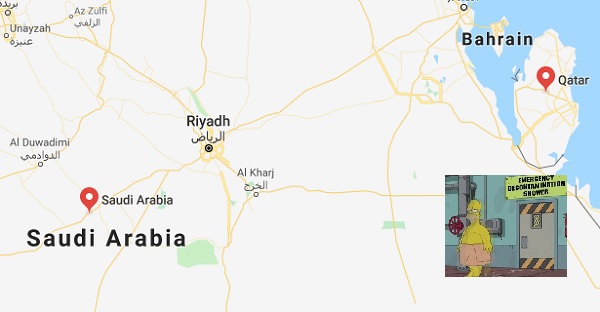 In an age of anger and outrage, at a time when it is easy to feel helpless and alone, leave it to Japan—the most unique culture in the world—to provide the perfect anecdote. Last week, you see, was the 12th Annual Angry Tea Table Flipping Contest. And yes we are ashamed it took us a dozen years to discover this contest in which “participants must shout a phrase of anger, frustration, passion, or hope, while upending a small table and sending it flying.” How does it work specifically, you ask?  According to Sora News 24, “An elderly woman in cooking garb is seated next to the contestant and when she touches their shoulder and gently asks them to ‘stop,’ that’s their cue to flip out both figuratively and literally.” That is, they flip the small tea table which holds various items, including a plastic fish. Winners are determined both on style points and the distance the plastic fish travels in the air. And what are the participants to shout before flipping the table? “Participants can shout about whatever their hearts desire. Rages this year included a man addressing all women with a ‘What’s wrong with me?!’ On the other hand, affirmations such as ‘I want a job offer’ or ‘I deserve a raise’ could also be heard.” We feel that if this contest was made mandatory worldwide, 73 percent of the problems plaguing this orbiting globe would be solved.

All the Beer in India, The Separation, TV vs. Internet Mexico, Lead and Violence, Boxing Office China, Where is the Corruption
Scroll to top