Perhaps you read this week about the discovery of Soviet jokes declassified by the CIA after 30 years which only confirms our already ensconced bias that when everything is classified nothing is secret. Maybe it is witnessing the last few hours of summer warmth washed away by the rains of autumn, but this revelation along with two others helped us bake some long undercooked ruminations. At a dinner event this week, a former U.S. official who would certainly know such things, noted that Americans don’t understand just how powerful U.S. government cyber capabilities are and what destruction America could wreak on other countries if it chose. But, he said, other countries do, which constrains their worst cyber terrorist tendencies. The next day at a lunch on the state of international trade, the speaker recounted talking to a U.S. Congressman who was complaining he could no longer talk recklessly anti-trade because the current U.S. president’s recklessness makes that impossible.  The Congressman was very happy to spout radical talk when there were no consequences. But now he has to speak the truth. Of course, all this occurs as computer technology is increasingly able to decipher what people are thinking or feeling regardless of whether they speak the thought or emotion. And, of course, many use Twitter to say things about others—athletes, politicians, ordinary people caught in the temporary winds of fame—that previously they only spoke to the person sitting next to them on a barstool. In other words, we can’t handle the truth but the truth can handle us. And so as we tell the one about perestroika and the seven kittens, we very seriously present three interconnected stories this week. Your homework is to determine how they are connected. It’s this week’s Memento version of International Need to Know.

A Youthful Look at Aging

The world, as we’ve noted in this space previously, is getting old. *Other than India and Africa, most countries face aging demographics. So which countries are best dealing with their demographic fate? The Global Aging Index, launched by researchers from Columbia University and the University of Southern California, aims to quantify this question. As you see in the chart below, of the 30 advanced countries tracked in the index, Norway, Sweden and the U.S. come out on top, with the Netherlands and Japan rounding out the top five. Given Japan is one of the oldest societies in the world, it is good their society is doing well at dealing with the situation. The index analyzes across five metrices: a) productivity and engagement, i.e. connectedness within and outside the workforce; b) health; c) equity; d) cohesion, social connectedness being one cohesion measurement; and e) security, both retirement support and physical safety. In the second chart below, you’ll note the U.S. is tops in productivity and engagement but low in equity. We’re always glad for a helpful index but notwithstanding we are getting older every day, we’d be interested in a youth index—they’re the ones most adversely affected since the Great Recession. 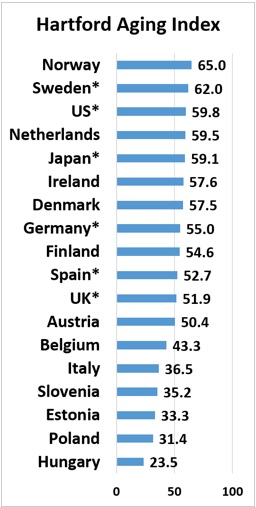 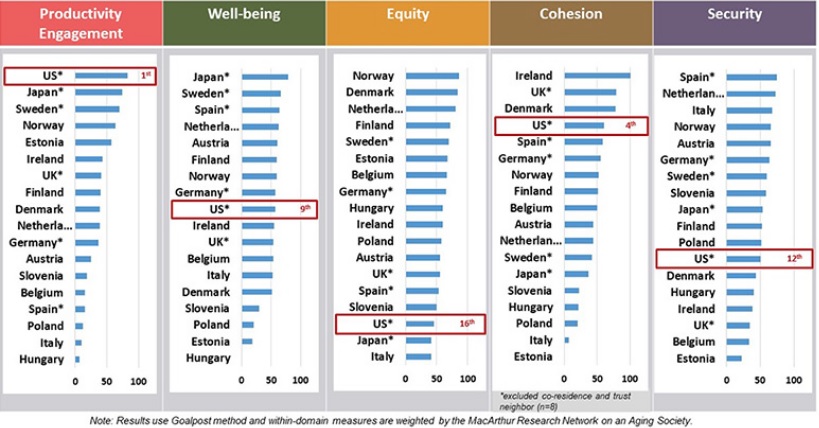 Or so fret lots of people around the world, according to a new Pew Global survey of 10 advanced and emerging countries. “In all 10 advanced and emerging economies polled, large majorities say that in the next 50 years robots and computers will probably or definitely do much of the work currently done by humans.” Greece tops the list of technological worriers with 52 percent of Greeks definitely believing it will happen and 39 percent believing it will probably happen. Greeks are also most likely to believe people will have a hard time finding a job due to automation. Given the last decade of economic problems perhaps Greece is projecting a bit from current and past circumstances. In fact, those countries whose economies are performing better express less of a fear of automation in the survey.  In Brazil and Japan, it is the young who are most worried about the robots. This could be factored into a youth index. We live at a time of great anxiety, over refugees, robots and more. Whether we should be this scared is another matter. 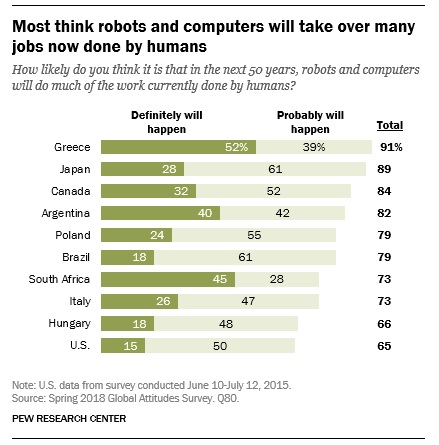 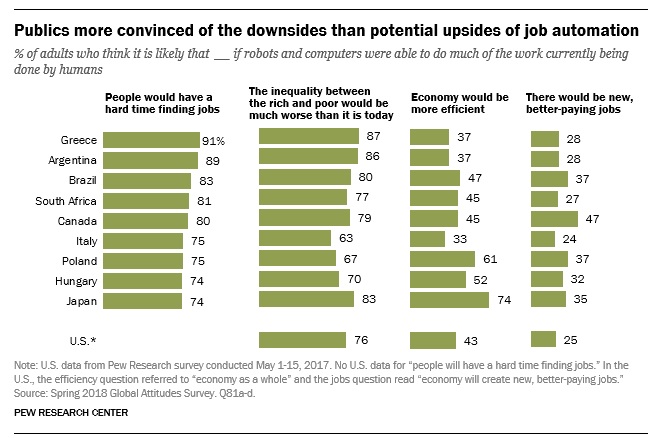 We have a vague memory that Oprah once promoted an author whose book claimed one could become wealthy by visualizing it. We visualize that at least that author got wealthy, but the Visual Capitalist provides a great graphic of where the wealthy are located in our world (besides in very nice houses with great views). “The visualization breaks down the world’s 129,730 people that have fortunes of US$50 million and above. It’s a much narrower measure, representing just the upper echelon (top 1%) of the world’s millionaire population.” Unsurprisingly, North America is home to the most ultra-wealthy followed by Asia and Europe. But you might be surprised to learn that the two fastest growing locations for the ultra-wealthy are Russia followed by Latin America. Still, they have a long way to go to catch up to the United States which is home to nearly 30 percent of the world’s ultra-wealthy, with Japan a distant second at 7.7% and China third at 6.8 percent. 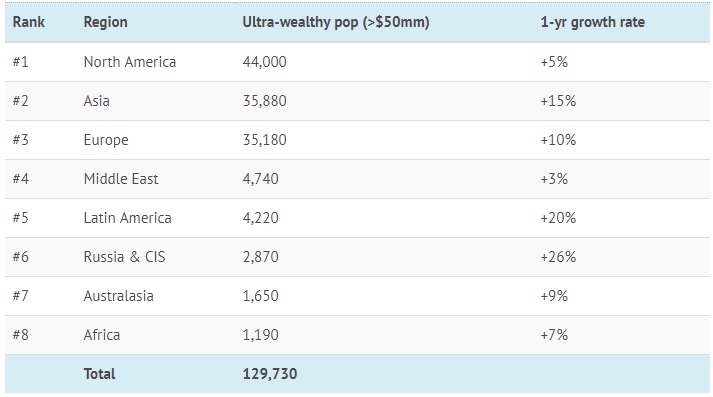