As a life-long Seattle Mariners fan, we greeted the announcement of Edgar Martinez’s long-overdue election to the Hall of Fame this week with unbridled Niehausean enthusiasm. We also viewed it as an illustration of the challenges with all human institutions. Edgar was demonstrably a more valuable player than Mariano Rivera, a New York Yankee who was also elected to the Hall this week. Edgar’s Wins Above Replacement (bWAR), a Sabermetrics measurement of a player’s total contribution to his team, is twenty percent higher than Rivera’s, just one statistical example of many we could provide. But, Edgar took ten years to make the Hall of Fame because he was considered a “specialist” since 70 percent of his career was spent as a designated hitter. Mariano Rivera, on the other hand, was elected in his first year (unanimously?!!!) of eligibility even though he too was a specialist, a closer, someone who only pitched one inning per game. This is only baseball (only baseball?!!!) but it is illustrative of a larger truth—humans are not very good at making judgments, of determining value, at devising institutions that don’t make mistakes. And yet when debating issues and policies, we are all very confident in our positions. Nonetheless, we confidently present news of underrated Ethiopia, good news on electricity and complicated news on China and coal. It’s this week’s International Need to Know, going to bat for important information and data.

You may remember we’ve been plugging Ethiopia as the world’s most underrated country for both its strong economy and political reforms. This week comes news on the refugee front with Ethiopia passing a law “giving refugees the right to work and live outside of camps.” You see, Ethiopia, like many developing countries, is home to a large number of displaced people fleeing wars and other catastrophes, in this case from South Sudan, Sudan, Somalia and Eritrea. In fact, Ethiopia is home to the second-largest number of refugees in Africa, behind only Uganda. Many of these refugees have been in camps in Ethiopia for years and not allowed to work. Now they can, as VOA News reports, “the law allows refugees to move out of the camps, attend regular schools and to travel and work across the country. Refugees can formally register births, marriages and deaths, and will have access to financial services such as bank accounts.” BTW, most refugees are not in the U.S. or Europe, rather most are hosted by developing countries. So, Ethiopia with a GDP per capita of $706 is more committed to refugees than the EU ($32,233 GDP per capita and the U.S. ($57,638 per capita). It’s a mixed up, muddled world we live in. 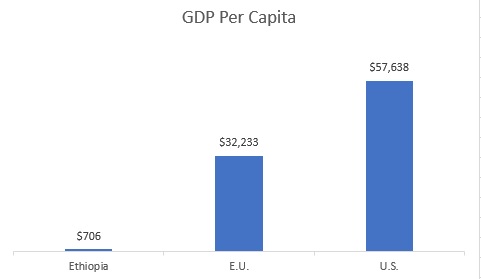 I Have Seen the Light

Our age demands that we only talk about catastrophes and doomsday’s imminence. But there continues to be good news out there too, including the fact that for the first time less than 1 billion people are without electricity. Our WorldinData reports that “the total number without electricity fell below one billion for the first time in decades; very likely the first time in our history of electricity production.” In fact, currently over 87 percent of the world has electricity, the highest percentage ever, and much higher than in 1990 when only 71 percent of the world had electricity. Of course, the cynics will say this means we’re making climate change worse. Only someone with continuous access to electricity would ever say such a thing. 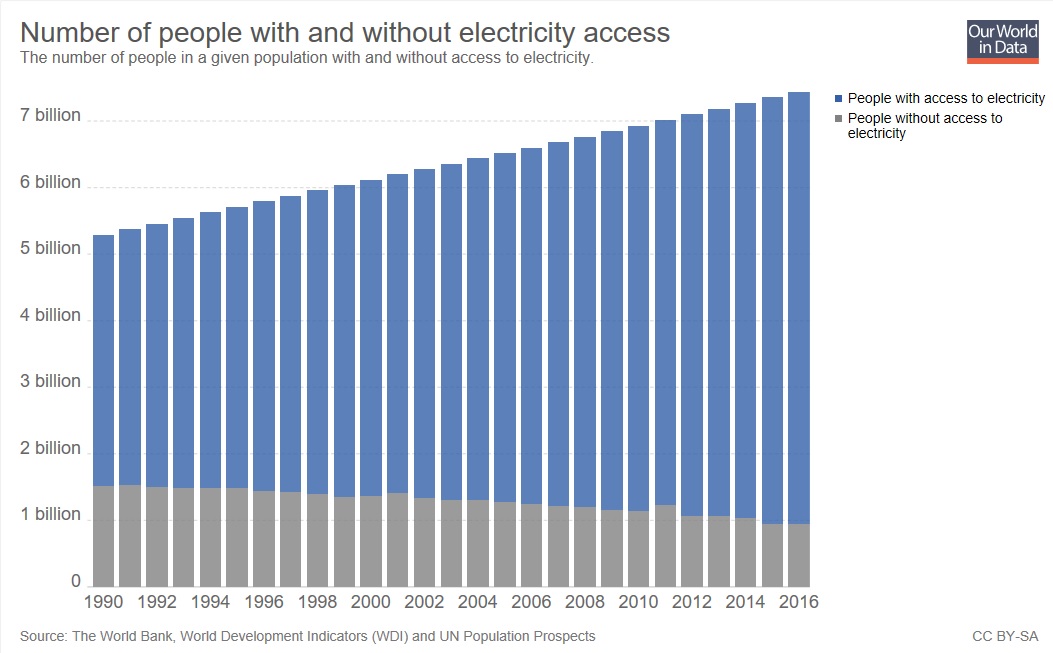 Even though this may cause the Karma Electricity Gods (a great name for a band) to turn off our power, we note that the Institute for Energy Economics and Financial Analysis (a horrible name for a band) reports that “China is the lender of last resort for coal plants.” Yes, China has been making strides in renewable energy at home as we have reported on in the past but the IEEFA confirms that “China has committed or proposed about $36 billion in financing for 102 gigawatts of coal-fired capacity in 23 countries.” For those counting at home, “that represents more than a quarter of all coal-fired capacity under development outside of China. As you see in the map below, Bangladesh has the most proposed coal plants financed by China followed by Vietnam, South Africa, Pakistan and Indonesia. This will provide more electricity to populations that need it but with a cost to the environment. All decisions are colored gray with trade-offs—in this case also gray from pollution. 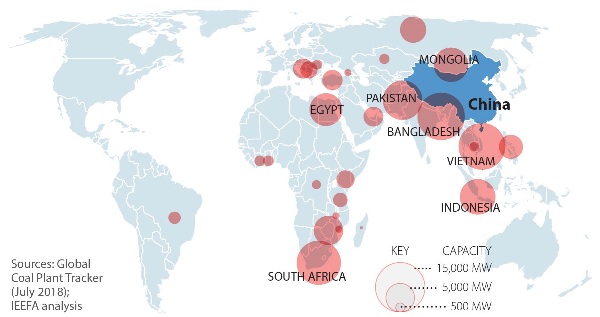