As part of our knee rehab, we are required to lie in a continuous passive motion (CPM) machine which slowly bends and straightens our knee. We do this many, many hours each day. It appears to be helping although it is no substitute for the strengthening exercises we also do multiple times each day  To pass the time on Wednesday morning in the CPM machine, we tuned into Michael Cohen’s appearance before Congress. There representatives passively made statements and asked questions according to their place in the political register. While the TV lights burned brightly on the scene, the members’ statements and questions illuminated nothing, as the Continuous Political Machine passively moved their lips and minds. We wonder whether Members of Congress need to step out of their CPMs and do some actual exercises. And while we wonder, prone in our CPM machine, we strengthen our mind on India and Pakistan’s underreported military engagements, do another rep on world demographics and ice ourselves with which is the most healthy country. It’s this week’s International Need to Know, like Bradley Cooper, performing a duet with our Lady Gaga world.

While we were all obsessing over an actor making up a crime and whether Bradley Cooper and Lady Gaga are an item, one nuclear power attacked another with conventional weapons. Yes, earlier this week India “launched an airstrike” in PakistanI territory. This was ostensibly in retaliation for a suicide bombing in Kashmir a few weeks ago. India asserted it destroyed a terrorist camp in Pakistan that was planning additional strikes in Kashmir. Pakistan claims India’s planes were intercepted and “released their payloads early without any casualties.” Pakistan’s foreign minister called India’s action a “grave aggression” and said it reserves the right to a “suitable response and self defense.” It now claims it has, shooting down one of India’s planes over Pakistani territory. We get the allure of Michael Cohen’s testimony, and the focus on the U.S. and North Korea, but it is remarkable nonetheless how little coverage or comment there have been on these incidents. We now return you to your regularly scheduled programming. Have a nice day.

Long time readers know we are somewhat obsessed with demographics, but in a good Stephen Curry practicing three pointers way, not in an Alfred Hitchcock Vertigo disturbing manner. So imagine our data joy when we stumbled upon a map in Visual Capitalist of the median age of every continent’s population. Europe (really part of Eurasia—read Bruno Marceis’ thought provoking book, the Dawn of Eurasia) is the oldest with a median age of 42. Africa is crazily young, with a median age of only 18. That’s where economic growth, and perhaps trouble, given all the young men, is likely to be found over the next few decades. In fact, the top five youngest countries in the world are all to be found in Africa. Three of the oldest countries in the world are in Europe with Germany, Italy and Greece the 3rd, 5th and 6th oldest countries in the world. Contrast this to 1950 when Europe’s median age was just below 30 and in Asia it was in the low 20s. Look at today’s data and you can get a pretty good picture of our world’s future. 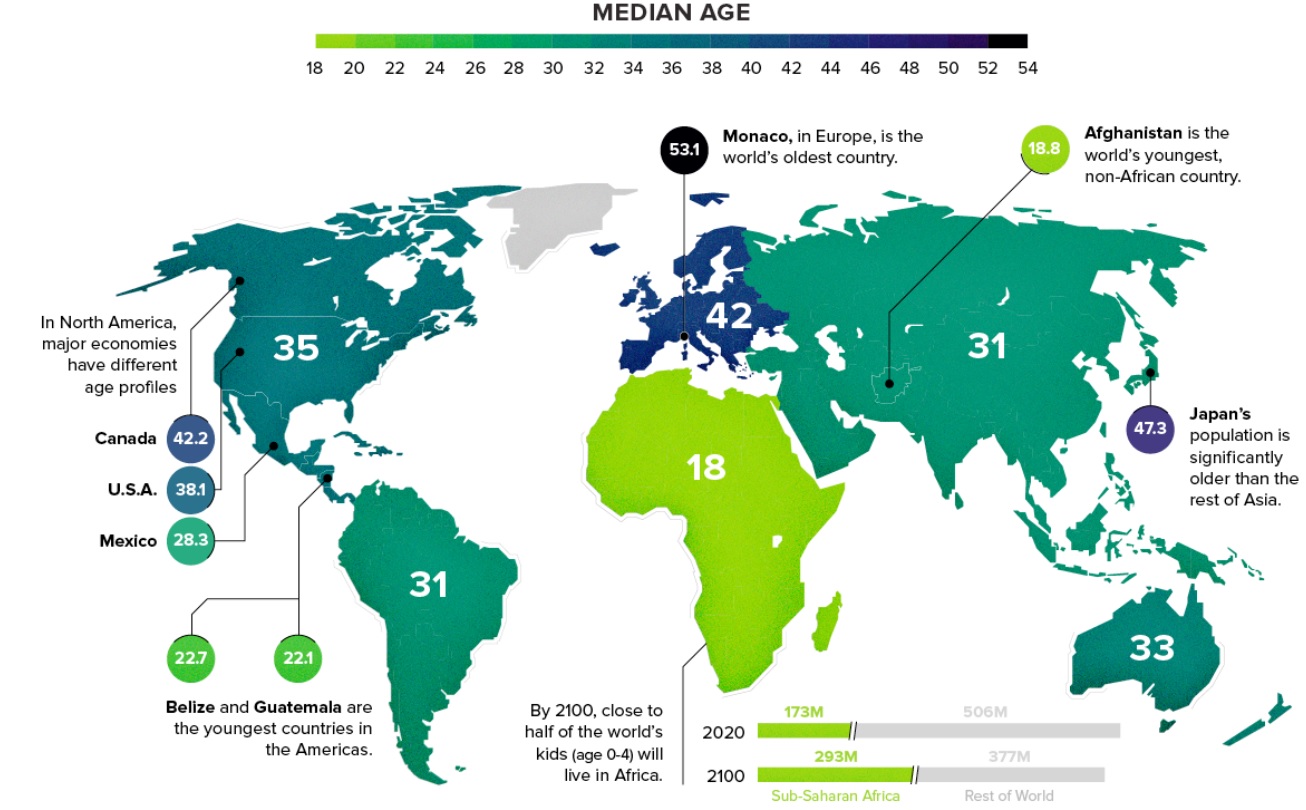 The Old and the Healthy

Bloomberg released their annual Healthiest Country Index this week and lists Spain as the healthiest country in the world (clearly not referring to their economy). The index “grades nations based on variables including life expectancy while imposing penalties on risks such as tobacco use and obesity. It also takes into consideration environmental factors including access to clean water and sanitation.” Spain has the third-longest life expectancy, behind only Japan and Switzerland who are both ranked in the top five in the Index. Clearly we should be eating more nuts, fish and olive oil per the Mediterranean Diet. We note that Singapore is ranked eighth, whose health care system, for reasons we don’t understand, continues to be ignored as a model by those wanting to reform the U.S. system.

The Most Popular App, the Key to Solving Climate Change, and Who is Most Co... Secure Your Biolabs, Japan Gives in to Reality and This Video Changes Every...
Scroll to top