Like Donna Summer we were on the radio. Okay, not like Donna Summer in any way, but we were on the radio, whoa, oh, oh, oh. Paul Casey asked us to be on his show “Voices of Experience” on KKNW-1150 AM where we talked about this very newsletter you are reading right now, as well as about a variety of important international issues. While we love WWOZ New Orleans, KEXP Seattle and KUOW, we now are, of course, enamored with KKNW and Paul Casey’s Voices of Experience. His questions were sharp and interesting as is his show. You can hear our contribution here around the 20 minute mark. So even as we practice, Bradley Cooper-style, lowering our voice to a deep resonant radio timbre, we broadcast to you a reassessment of India and China’s economies, how Northern Ireland’s demographics affect Brexit, and women in business around the world. It’s this week’s international need to know, wishing we had college age children so we could try to out-bribe Felicity Huffman and Lori Loughlin.

You probably saw last week that a Brookings Institution study determined that China was inflating its GDP growth rate by an average of 1.7 percent each year from 2008 to 2016 (China’s government economists  also work closely with Tom Brady). That’s not a huge surprise, most people believe that China has been overstating its economic growth, but it’s interesting to see someone try to put a number to it. If Brooking’s numbers are accurate, this has ramifications for understanding China, including its comparison to India’s economy. As you see in the chart below, using the new GDP numbers for China, on average India’s economy grew faster than China’s from 2008 to 2016. In fact, in six of the eight years India’s economy had higher growth rates. People often ask me how an authoritarian government can be more successful economically than a democratic one. Well, for the last decade, India’s democracy has outperformed China’s increasingly repressive government in GDP growth rates. Of course, China’s economy outperformed India’s before that and demographics play a huge role in economic development and growth, but nonetheless, the story has become more complicated with Brooking’s calculations. 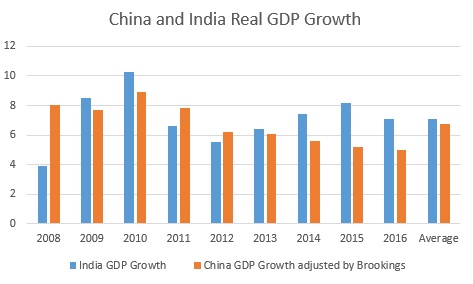 Time is on my side, sang Irma Thomas before the Rolling Stones ripped her off, but many might want to change the lyrics as the March 29th Brexit deadline looms. But whose side are demographics on? We ask because concern over Northern Ireland has been a major angle of Brexit angst, and those demographics continue to change. As you see in our table below, in 1991, about 38 percent of Northern Ireland was Roman Catholic. In 2011, 44 percent were Roman Catholic and under current trends 51 percent will be Roman Catholic by 2021. Meanwhile, the percentage of Protestants has decreased during that same time period, making the calculus of Northern Ireland, the U.K. the EU, Ireland (predominantly Catholic) just that much more complicated. Of course, the number of religious people of any persuasion continues to drop in Northern Ireland as it does throughout all Europe. At any rate, demographics, tribal tendencies and good old political belief inertia will be a fascinating factor in Brexit politics.

We’re a week late in presenting gender equality data in time for International Women’s Day (Ed note: If only you had women on staff. INTN: If only we had staff). Nonetheless we persevere by presenting this week the World Bank’s Women, Business and Law Index which attempts to measure laws and regulations’ effects on women’s ability to work in different regions of the world. The good news is the Index has found improvement in every region of the world for women over the last decade. “Ten years ago, the global average score was 70.06. Since then 131 economies made 274 legal changes towards gender equality. This led to a 4.65 point increase in the average global score, to 74.71 today.” Six countries achieved perfect scores of 100 in the Index: Belgium, Denmark, France, Latvia, Luxembourg and Sweden. There is far more work to do, especially, according to the Index, in the Middle East and North Africa, but trends are pointed in the right direction.

Secure Your Biolabs, Japan Gives in to Reality and This Video Changes Every... What About Tomorrow, Electric Car Check-Up and Don’t be Down on Downu...
Scroll to top