While drinking and eating from a bar and grill based on the back of a pick-up truck (only in New Orleans), as we waited for the Mardi Gras Indians on St. Joseph’s Day a few years ago, we felt a stir in the crowd. And there was Mac Rebbenack, otherwise known as Dr. John, rambling, a little unsteady on his ornately carved walking stick, through the neighborhood. The locals greeted him like an old friend, which of course, he was. We said hello too. It feels as if we’ve known Mac Rebbenack our entire life. First probably through Dr. Teeth on Sesame Street and The Muppet Show but then through the man’s music itself. But it wasn’t until later in life that we saw him perform live. We were front row in a small club, seated at the foot of his piano–we could practically touch the voodoo skull sitting atop it–and grooved to one of the tightest bands we’ve ever had the honor and pleasure to listen to. We have a thing for voices, and Mac had one of the most unique talking voices in the world. It was as if it was baptized out of the canals, saloons and dirty back streets of New Orleans on a full-moon night. And, of course, it was. As The Times-Picayune obituary wrote, “Mr. Rebennack was a man whose style and outlook were shaped, too, by voodoo, that mysterious and mystical spiritualism that developed from the city’s Afro-Caribbean roots. And in New Orleans, that meant he stood out so much he fit right in.” The word “legendary” was invented in some bayou swamp thousands of years ago just so we would have a way to describe him. Rest in peace Mac, and the rest of us will continue to groove because of you. And we groove to a new troubling world order beat, listen to the funky sounds of inflated Indian GDP growth and totally get down to Japanese office chair racing. It’s this week’s International Need to Know, carrying an umbrella even on a sunny day. 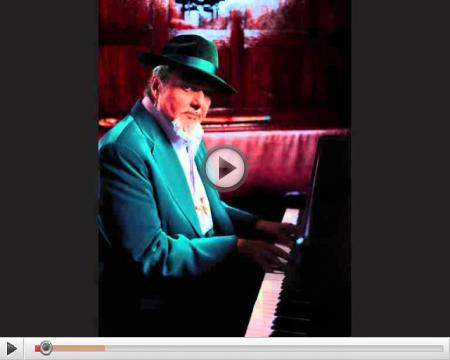 Trade Waits for No One

As China rises and the U.S. is run by a short-sighted, transactional presidency, the world is shifting and twisting like an alligator breaking into a Floridian’s kitchen. When we were in Vietnam a few weeks ago, we met with someone the U.S. government hired to examine how goods were being smuggled into China so as to avoid U.S. tariffs. Business people don’t sit idly watching leaders drunkenly move their chess pieces—they act. Meanwhile, Huawei, the controversial Chinese IT company, acted recently by buying one of Russia’s leading face recognition technology companies. As the world splits into divided Internet spheres, it would be short-sighted to believe our globe will remain static. In fact, just last week, gizmodo.com reported that “For more than two hours on Thursday, one of China’s largest internet providers forced a huge chunk of European mobile traffic to be rerouted through its own servers.” This included U.S. military traffic, data to and from companies such as Microsoft, and almost all traffic to and from France and other European countries. All of this activity, illicit and otherwise, occurs in an era when most large challenges are transnational—climate change, refugees, health (see China’s under-covered swine flu epidemic which is now an Asian epidemic) and others. Alas, our world’s short-sighted leaders have not made appointments at Warby Parker’s. 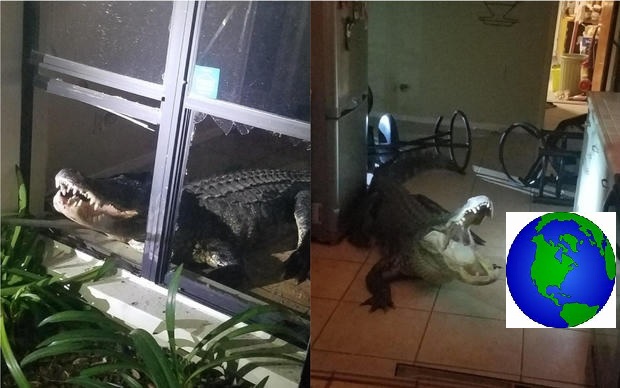 India Goes All “China” On Us

In March, we noted a new study that quantified how much China was inflating its official GDP statistics (1.7% per year from 2008 to 2016) and compared China’s revised GDP with India’s higher GDP growth rates during that same period. But what if India was also inflating its official GDP growth figures? Well, a paper published in Harvard’s Center for International Development by Arvind Subramanian, a former economic advisor to the Indian government, claims, “A change in the method used to calculate India’s GDP led to a significant overestimation of growth.” How much? The report claims instead of an average of 7% growth from 2011 to 2017, the average was actually 4.5%. This changes the chart we presented in March considerably (see below). Who else has been inflating GDP growth? And how much grade inflation is there at Harvard? We await answers. 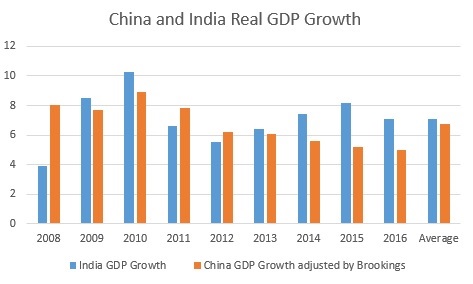 In a week where memorials and second lines were held for two New Orleans icons—Leah Chase and Dr. John—and should have been held for Kevin Durant’s Achilles’ tendon and perhaps for democratic hopes in Hong Kong, we feel we must end on a lighter note. And so we present the Japan Office Chair Grand Prix. This is a race held in Hanyu, Japan in which “teams of three battle it out on ordinary office furniture across two grueling hours to see who can complete the most laps of the 200 meter course.” We are ashamed to admit that this race was first started in 2009 and we have yet to watch it. Or even better, we are searching for two teammates to join us in the 2020 race. Send us your credentials and applications immediately.

The Coming Robot War in China, African Manufacturing, and No Coal in U.K. Chinese Tariffs, Closed China Market and Renewables Vs Coal Scroll to top