For reasons that may become apparent in the future, we’ve been listening to lots of 1970s New York City Puerto Rican salsa music. Essentially Puerto Ricans living in the Big Apple adopted and adapted Cuban Salsa music, popularizing it to the world even as they made it their own. Tino Puentes is perhaps the most famous example from this era but there are plenty of others including Ray Barretto, Willie Colón and Eddie Palmieri. New York was an amazing incubator of creativity and innovation in that day and age–from disco to punk to rap in music, to Keith Haring, Tseng Kwong Chi and others in art, to gay rights and other social causes. Since the late 1980s, New York has ceased to be an interesting place with the West Coast becoming the incubator of innovation and now at the end of the first fifth of the 21st century, other countries are beginning to pick up the American cultural and innovation slack. But that NYC Puerto Rican salsa still moves the hips and pounds the hearts of listeners. For New Orleans music aficionados like ourselves, you’ll note the Caribbean rhythms that helped jelly-roll the Crescent City beat. So even as we tickle the keys to China’s lowering tariffs, shake the marimbas of China’s closed market and blow the horn on increased use of coal, we turn up a little Che Che Colé by Willie Colón. It’s this week’s International Need to Know, grooving to the many tunes of this complex world.

We See Your Ace and Lower You Three Kings

We are reading Bruno Macaes book, Belt and Road, A Chinese World Order, that describes how and why China is becoming assertive in the world, or as Macaes puts it, “China is transforming from a participant to a shaper of globalization.” This is true and the U.S. – China trade war is accelerating this phenomenon like two teenagers drag racing on the city strip, t-shirt short sleeves rolled up above their biceps, a cigarette dangling from each of their lips (wait, is tobacco on the tariff list?). The Peterson Institute documents that as China has raised tariffs from 8% to 20.7% on U.S. goods, it has slightly reduced tariffs on non-U.S. goods from 8% to 6.7%. That’s not a huge reduction, but on a host of goods the difference is greater than that as you see in the chart below. In other words, China is working to help other countries compete against America. The rest of the world may become more tied to Chinese trade as the U.S. and China decouple with all the consequences, intended and unintended on both sides, that will bring. Of course, the most challenging barriers to doing business with and in China are non-tariff barriers. Read on! 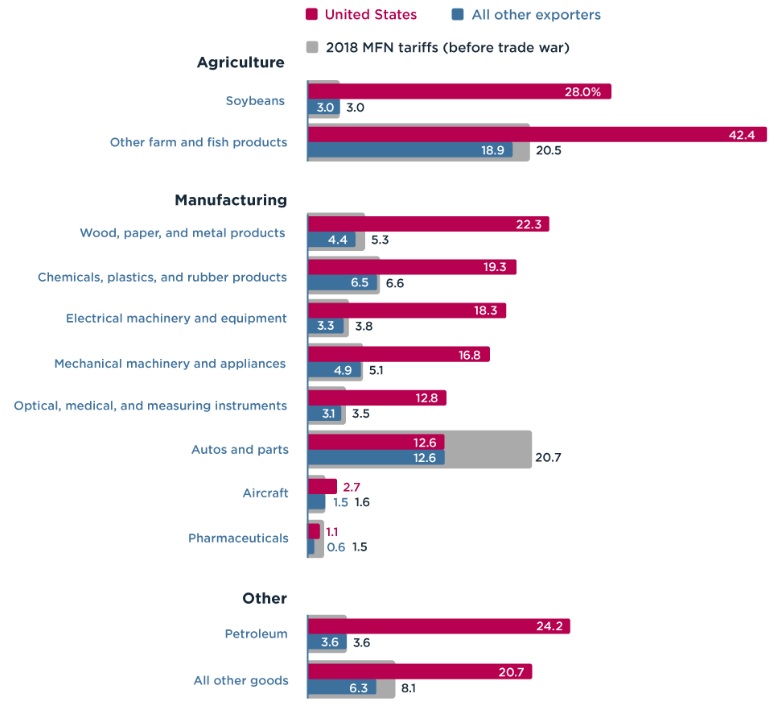 You’re Not Allowed in the Game

Count us among the many who think the way the current U.S. Administration is countering China is wrong-headed. But there are reasons to challenge China. The country continues to be a very closed market as the graphic below from Visual Capitalist shows. There are certainly examples of successful U.S. companies in China (hello Starbucks), as well as other countries’ companies, but in any strategic industry it is well-nigh impossible for a foreign company to succeed in China. Analysts will note that many countries protected their industries when developing, including the U.S., but China has done so on a larger scale and more deeply than most. 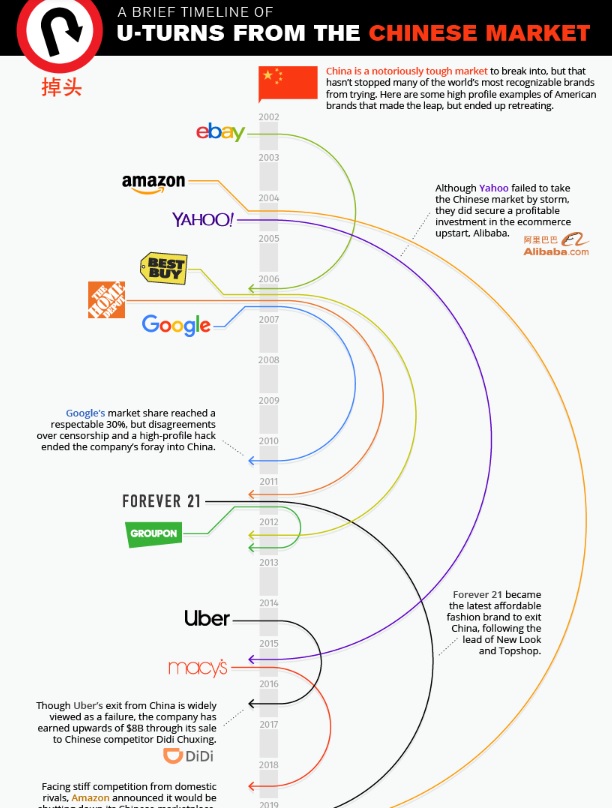 Renewable energy, led by solar and wind, saw the largest increases in electricity generation in 2018. Unfortunately, just behind was coal. In fact, coal-based electric generation increased by 3 percent last year to a new record total of 19,000 TWh (TerraWatt Hours). Electricity generated by coal actually decreased in the developed world last year, primarily because of large reductions in the U.S. and Europe. But in Asia, coal-generated electricity is increasing, led by the two most populous countries in the world, China and India. That coal-generated electricity decreased in the U.S., even as overall U.S. electricity usage increased, is a great sign for the future. It’s further evidence that any effective Green New Deal must be one that finds ways to develop, export and spread new clean technologies throughout the world. 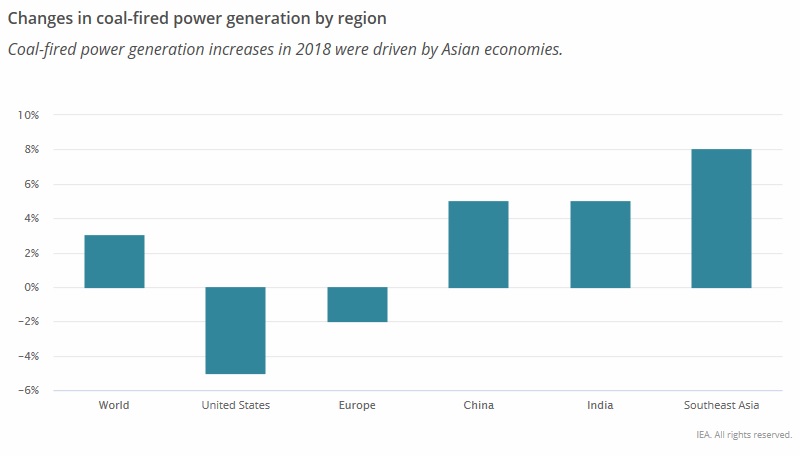 Trade Waits for No One, India’s False GDP, and Japanese Chair Racing Honest to Goodness, AI vs. the UN and Arab Views Scroll to top