Over the weekend we were headed to a baseball game and got stuck behind a large pick-up truck driving very slowly. As we grumbled at its lack of speed we noticed two stickers on its back window. One read “Redneck” and the other read “White Pride.” We are sure many people feel such thoughts but it appears that now that there is a president who gives loud and obnoxious voice to such emotions that people are emboldened to slap them on their vehicles for all to see their racism. It’s a bit scary. After the baseball game, we went to a comedy show (when you are a fan of the Seattle Mariners such antidotes are necessary) to see Helen Hong of Wait Wait Don’t Tell Me and Netflix comedy fame. We short-sightedly sat in the front row and at one point Ms. Hong, who continually involved and engaged with her audience, looked at us and said we were the “whitest person she had ever seen.” It was a joke, of course–and we even laughed at the time. But, later we wondered what she meant when she said we were the “whitest.” Surely she’s seen whiter skinned people than us–she lives in Brooklyn after all. Was it the way we were dressed? She had no way of knowing our cultural tastes or ideas or inner thoughts. Of course, it was all a set up for her to tell jokes, but we wonder if her joke was a sticker on the back of her pick-up truck full of gags. But whatever our level of whiteness or any other color, we note China’s robot war, Africa’s manufacturing gains and Britain’s lack of coal.  It’s this week’s International Need to Know, vowing to fight institutional racism while misjudging the content of people’s character (we are a bad judge of character) of people all over this complex, diverse world.

The Coming Robot War in China?

The great robot phobia began approximately four years and seven months ago. Humanity is increasingly scared robots will take over, kill us and take our jobs. Two years ago we reported that automation and robots may harm developing countries by eliminating manufacturing jobs before these countries leverage these jobs to develop into mid-income countries. Now comes a study focusing on how automation and robots are affecting China. Remember China is gung-ho for AI and robots with, as the report notes, President Xi himself calling for a robot revolution to boost productivity (though no robots will be allowed to be members of the Chinese Communist Party and definitely are not allowed to be General Secretary). China is the largest user of industrial robots in the world (per capita South Korea is the largest) and recent studies have found that 77 percent of Chinese jobs are susceptible to automation. This study, by the Institute of Labor Economics, finds that increases in industrial robots in a Chinese city reduces employment in those cities, and “reduces annual wages by 7.7 percent.” The study also claims that social unrest increased dramatically in places in China where there were large increases in robots. This is probably one of the reasons for Xi’s clampdown on society–the worry over social unrest, some of which will be caused by automation. All countries are likely to face a reckoning with automation and robots—China’s may be more challenging than most. 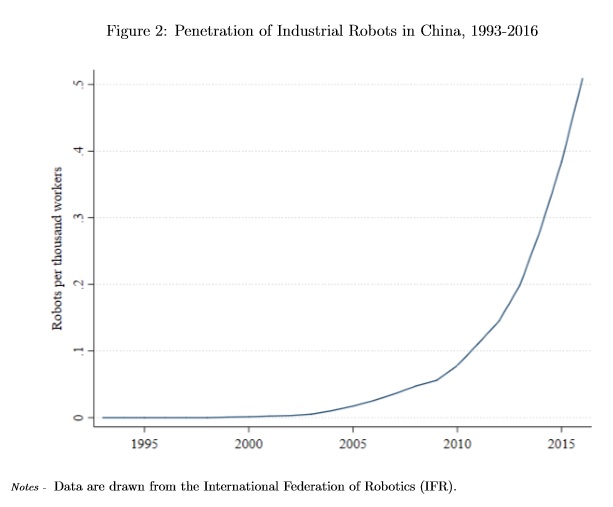 Last month we told you about the great book, The Next Factory of the World, which details how Chinese investors are helping African countries become the next manufacturing hubs. Now that you’ve read the book (you have, right?), we’re here to tell you via a Noah Smith Twitter thread that the African manufacturing revolution continues (even with the threat of robots and automation) with Indian, Japanese and Korean investors playing a part. Smith points to an article describing Isuzu Motors opening a vehicle assembly plant in Ethiopia (our world’s most underrated country—please someone start an Ethiopian ETF we can invest in), as well as Hyundai opening an assembly plant. And Nissan has opened a plant in Ghana. Can Africa develop before the robots take over? Also, if a significant percentage of manufacturing shifts to Africa from Asia, what will this mean for U.S. West Coast ports? We await answers. 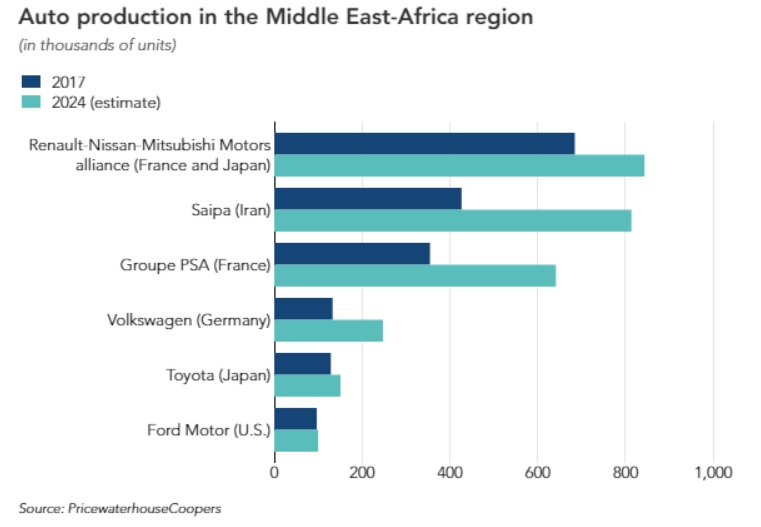 The world continues to change quickly and despite what people may tell you, some of these changes are for the better. Take the U.K. for example—it’s not all about Brexit and political upheaval. For the last two weeks, “Britain has not used coal to generate electricity—the longest period since the 1880s,” according to the BBC. Yes, Britain will still burn lots of coal this year but it is on pace to eliminate all coal usage by 2025 as it continues to bring renewable energy online and relies on natural gas and nuclear power. Below is a snapshot of Gridwatch’s real-time energy usage in the U.K. Notice the coal gauge is on zero. New technologies will continue to improve clean energy generation, in the U.K. and elsewhere. But what will Santa do in the future? Kids will be able to act as badly as they want by 2030.

One of the Four Most Important Countries, Ms. Nguyen is Evidence, and the Trade... Trade Waits for No One, India’s False GDP, and Japanese Chair Racing
Scroll to top