Summer is our favorite season. We bask in the warmer weather, luxuriate in the longer days and enjoy the greater variety of fruit at our local produce stand. So there should be an extra bounce in our step this week as the calendar turned to a more friendly page. And yet twice in the last week, we were so alarmed and angered by the news that our step plodded rather than sprung and we turned off all media to avoid the anger-inducing distractions. This, of course, is a selfish thing to do. If we are moved so emotionally by what is going on in our world, the proper step is to try to change the world for the better. But occasionally one throws up their hands in dismay and apparent powerlessness, search the fridge for Rainier cherries and distract oneself with loud music. But the world and its problems remain. And so an idea we had not too long ago germinated as we spit out a cherry pit and turned up the music just a bit louder yet. The idea is not quite ready for prime time, alas. Most of our ideas are quarter baked, half baked at best. But we hope soon to present this one after it has broiled in the oven a bit longer. And even as we toil in the kitchen, we serve up a dish of the state of honesty in the world, spice things up with some UN AI, and throw onto the grill what the Arab world thinks.  It’s this week’s International Need to Know, a bit calmer now while listening to our favorite Frank Sinatra song.

If we ever find a wallet with money in it, we like to think we would work to return it to the owner. Three researchers, who weren’t about to take our word for it, conducted experiments in 40 countries to determine which people are most honest and “whether people act more dishonestly when they have a greater incentive to do so” by leaving wallets with varying amounts of money in them in public places. Honestly, we were surprised by the results and we bet you will be too. It turns out the more money in the found wallets the more likely a person will turn in the wallet. Most people, including economists, according to the research, predicted it would be the opposite. We were all wrong. There are differences in rates of honesty by country. The northern European countries were most likely to return wallets. China was least likely. What causes this difference in honesty among countries? The researchers suggest “that economically favorable geographic conditions, inclusive political institutions, national education, and cultural values that emphasize moral norms extending beyond one’s in-group are also positively associated with rates of civic honesty.” The researchers plan on conducting more studies to delve into population differences—so if you see a wallet lying on a park bench…you are being tested, one way or another. 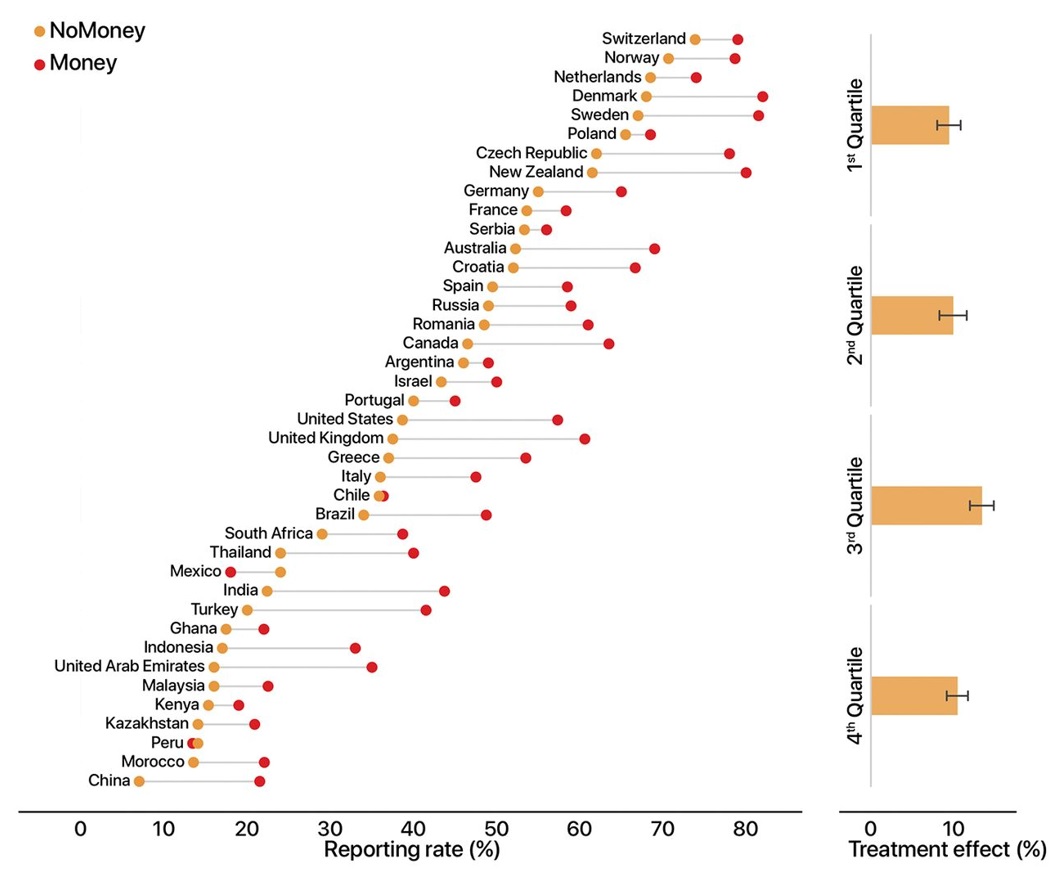 Is that Boutros Boutros-Ghali or a Computer?

In news that we found completely believable, researchers have created an AI program that can create UN speeches indistinguishable from the real thing (or maybe we are living in a software simulation and these speeches have always been AI generated?). Researchers “used a readily available language model that had been trained on text from Wikipedia and fine-tuned it on all the speeches given by political leaders at the UN General Assembly from 1970 to 2015. Thirteen hours and $7.80 later (spent on cloud computing resources), their model was spitting out realistic speeches on a wide variety of sensitive and high-stakes topics from nuclear disarmament to refugees.”   AI created speeches on general topics such as climate change that were almost impossible to differentiate from the real thing. Speeches on “inflammatory” topics only produced realistic speeches 60 percent of the time. Articles in INTN are impossible to replicate using AI.

The Warm and Cold Waters of the Arabian Sea

The waters we swim in affect who we are. The arguments in America, for example, as polarized as they may be, are constrained within a certain spectrum*. That spectrum is different in various parts of the world as a recent survey shows. The poll conducted by a partnership of BBC News and the Arab Barometer finds that in certain countries the number of non-religious has risen significantly, including in Tunisia, Libya Morocco and Egypt. But note that the number of non-religious is far fewer than in Europe and the U.S. There is a Persian Gulf sized difference between the Arabian Sea and the Atlantic and Pacific. Strikingly, in most Arab countries, honor killings are more acceptable than being gay, though honor killings are not particularly popular which means being gay is really unpopular. And finally, Turkey’s weak strong man Recep Erdogan is more popular in the Arab world than either strong weak man Trump or silly strong man Putin. In fact, given the recent election, it’s safe to say that Erdogan is more popular in Algeria than Istanbul which means he’s likely to be unpopular there soon too.

*The spectrum has been widening in recent years 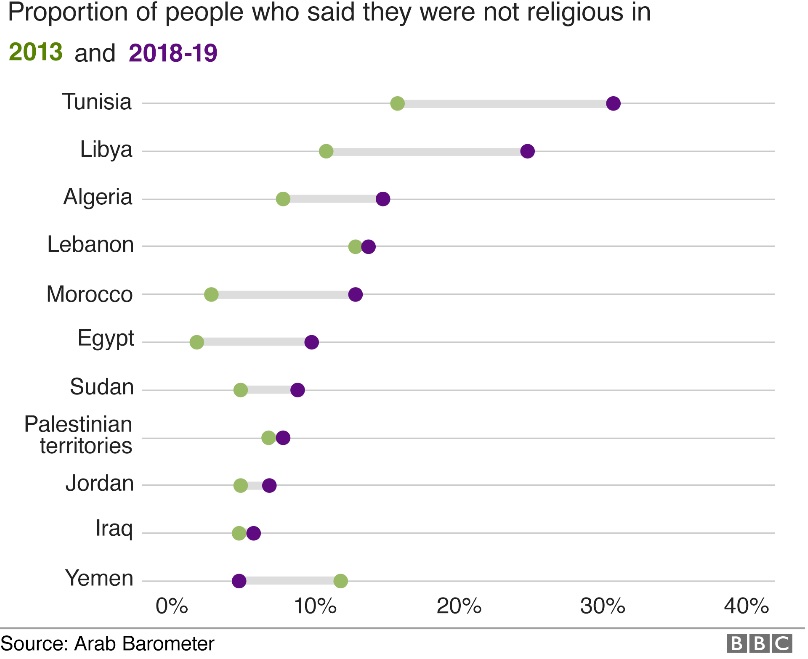 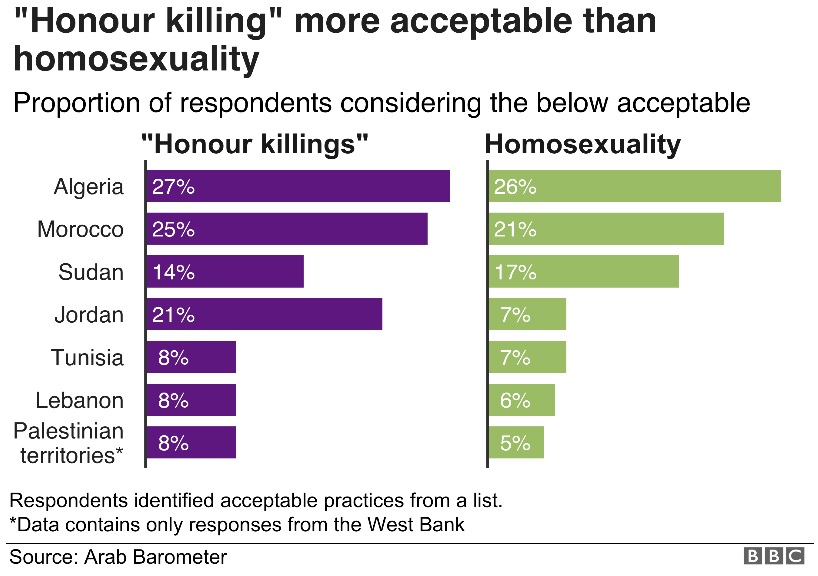 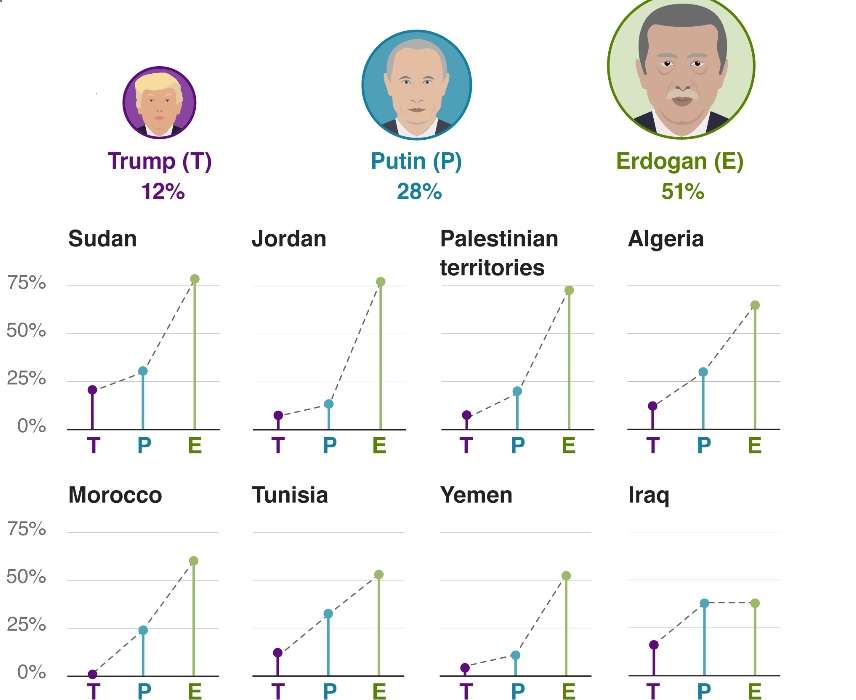 Chinese Tariffs, Closed China Market and Renewables Vs Coal What it Means to be Chinese, Europe & the Supply Chains, and Who Trusts...
Scroll to top