The greatest movie going experience of our life was opening night of Pulp Fiction in 1994 at the old Neptune Theater when the packed Tarantino-loving house cheered the opening credits and two of our friends walked out of the theater in disgust during The Gimp scene. Later a friend’s very liberal Mom (so far to the left she’s on the right) told us it should be illegal for Tarantino to make such movies. She was dead serious. We thought of all this when attending opening night of Tarantino’s latest, Once Upon a Time…In Hollywood—his elegy to 1969 Los Angeles. Like every Tarantino movie, Hollywood has three things: a) a great soundtrack; b) allusions and homages to movies, television and pop culture; and c) people attacking the movie based on their pre-conceived notions rather than the film itself (Tipper Gore lives!). Hollywood has many incredible scenes, including one much talked about of Margot Robbie, who plays Sharon Tate, watching the real Sharon Tate in a movie. But, our favorite scene features Brad Pitt’s character driving through the L.A. night from his boss’s mansion to his humble RV trailer. With each cut, a different song or commercial plays from the radio, showing how long it takes to get from point A to point B in L.A., and how much fun it is to listen to music while doing so, perhaps especially in that era of limited media distractions. For many it was probably a meaningless throwaway scene, but for us, it summed up everything that is great about Once Upon a Time…In Hollywood and leads us to drive our convertible through the world’s transformation to a service economy, give a foot massage to people worried about climate change and munch on the Big Kahuna Burger of space exploration. It’s this week’s International Need to Know, a glowing suitcase of international data and information.

Work in the Future

During our brief vacation, we ate In Utica, New York at the Tailor and the Cook, one of the best meals you’ll find in these united 50, so if you ever find yourself in Utica (and why wouldn’t you?), go there. Also prominent in Utica are the closed up factories that have sat dormant for decades. The World Bank recently published a graph showing that the highest percentage of jobs in the world are in the service sector, more than double manufacturing and far more than agriculture too. This is much different than in 1999 when there were far more agricultural jobs. The graphs (see below) also show the percentages for Low Income, Lower Middle Income, Upper Middle Income and High Income countries. Note that as countries become richer there is a big drop in agricultural jobs and a steady increase in service jobs. Manufacturing jobs also increase with wealth–until a country reaches High Income status. Then the percentage of manufacturing jobs decrease. That’s when countries complete the transition to service oriented economies. In fact, as we’ve noted in the past, all upper income countries have seen the same slope of decrease in manufacturing jobs whether it’s Germany, the U.S., France, and now even China. Policy makers will ignore all this, of course, in trying to save manufacturing jobs. 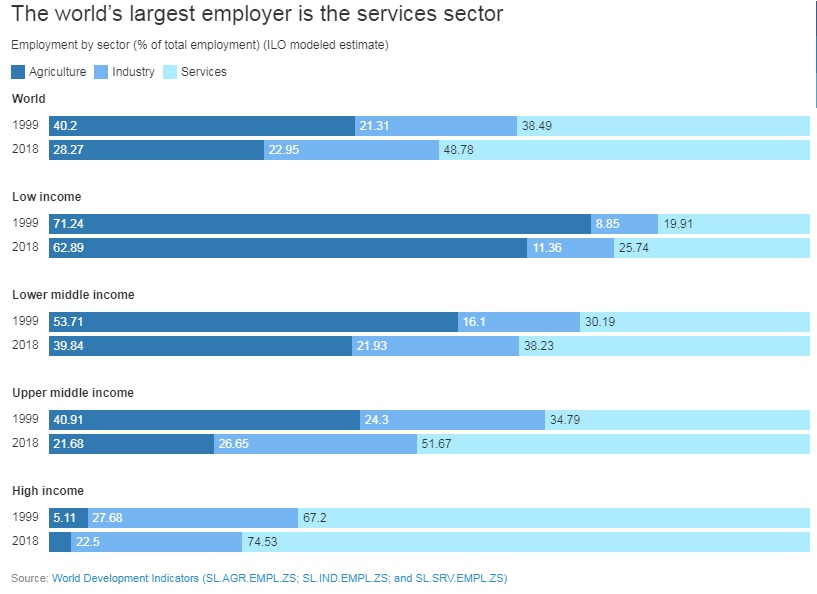 The World is Doomed, How to Save It*

The International Need to Know spouse alerted us to a headline that instead of the world only having 12 years to stave off the worst effects of climate change (last month’s alarming headline), we now only have 18 months (this month’s even more alarming headline). Our initial reaction is the world won’t come to its senses in 18 months so as long as we’re doomed let’s drain the bank account and have a good time. Of course, when we clicked on the headline, the story was a bit more complicated. So in the interest of not giving up hope, let’s reiterate again that though the United States needs to get its act together in confronting climate change, the real challenge going forward is other countries as the chart below illustrates. Sure it may be unfair that in the past the United States and Europe accounted for a large portion of CO2 emissions (the Soviet Union too) but going forward it’s China and India that are the largest culprits. Finding policies that help those and other fast developing countries to reduce emissions is the most important factor to combating climate change. 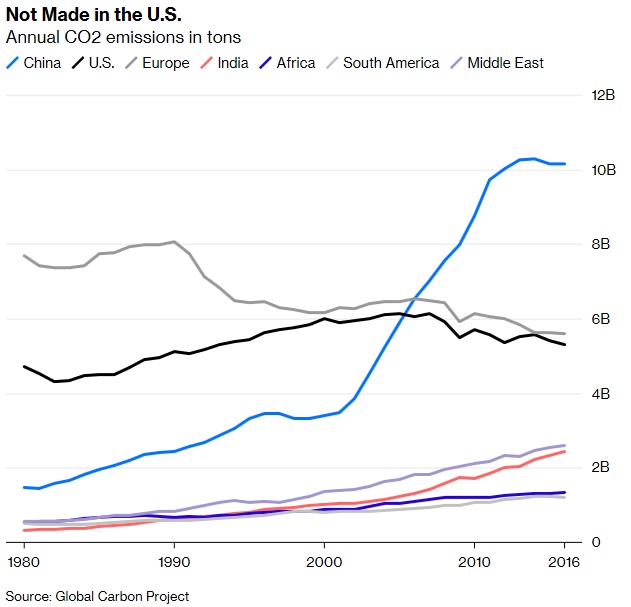 *Editor’s Note: So you’re saying we’re not doomed? INTN Response: We are always and everywhere doomed–eventually

During our travels a few weeks ago, the 50th anniversary of humans landing on the moon took place. And last week, India launched a rocket into space as they ramp up their space exploration. So which countries spend the most on space (outer we mean, not real estate, which would clearly be China)? As you see below, the U.S. is still the leader by a large margin with China and Russia a distant second and third. As a share of GDP, however, Russia is first, and India is sixth. And by this measure Israel pops into the top ten. Of course, there are many private space efforts as well. One of the great disappointments of our lifetime is the lack of progress in space exploration. Perhaps with the many new countries and companies joining in the adventure, that will change. 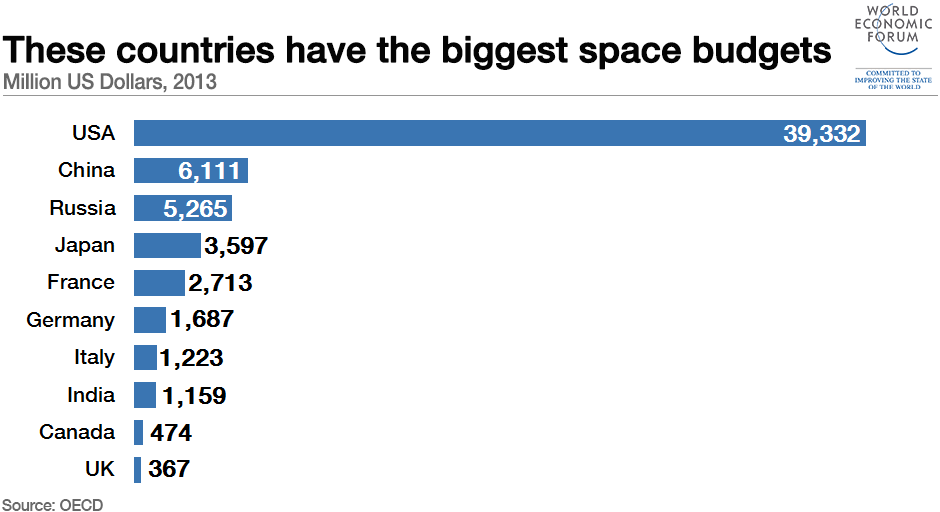 The Size of Things to Come, Japanese in Cars Getting Naps, AI in Africa Collapse of European Coal, Love in Time of CRISPR China, Ethiopia Update
Scroll to top