Twenty-years ago this week in a room on the 37th floor of the Sheraton Hotel during the WTO meetings in Seattle, we looked down at Donald Trump-supporters running rampant on the streets of Seattle as the governor of Washington state announced a state of emergency on television. Earlier that morning we braved the line of protesters with our seven-months pregnant colleague. The protesters, who were violent from the beginning, despite how they were depicted in the media at the time and in books and movies since, shoved our pregnant colleague who was trying to cross the street to get to a meeting. I was one of the staff helping to organize the WTO meetings in Seattle. At one point during the week I caused a U.S. State Department official to cry. Ordinarily I would feel bad about causing someone to weep openly but if you knew what the State Department official had done you might weep yourself. Donald Trump-supporters controlled the streets that day and have set the agenda for trade policy ever since. It took the protesters 17 years to gain complete control of the levers of power when they elected Donald Trump and made their dreams and wishes official U.S. trade policy. Pulling out of trade agreements, increasing tariffs on foe and ally alike, trashing the WTO and tearing down the post-World War II liberal economic order have all been accomplished. Donald Trump won in November 1999 and thus far is winning today. We take to the streets worrying that organ harvesting rumors in China are true, marveling that peak oil usage may be occurring and puzzling over education outcomes around the world. It’s this week’s International Need to Know, taking Thanksgiving off next week to eat our award-winning Louisiana cornbread stuffing, but back the week after.

Generally we like our fiction grounded in reality and become annoyed when a TV show or movie makes it difficult to suspend disbelief. We’re like that with the real world too which is why we’ve refrained from writing about the allegations that China is harvesting organs from political prisoners—it seemed too crazy to believe. But a new study analyzing the data of China’s organ transplants gives us pause. By way of background, after international complaints that China was using prisoners to harvest organs for transplant surgery, China claimed to be using a new system in 2010 to prevent such abuse (they always denied killing prisoners, political or not, just to take their organs, though there have been accusations of that as well). Official Chinese statistics claim “volunteer deceased donors went from 34 to 6316 annually,” apparently proving that China was no longer using prisoners’ organs. However, three authors, including Matthew Robertson, published a paper in BMC Medical Ethics Journal that claims this “data is manipulated, and done in the crudest of ways: …it appears that all of this data was manufactured using the mathematics one learns in high school: a quadratic equation.” Yes they used math we learned in 8th grade to gin up data making it look like they were no longer harvesting organs from prisoners. Matthew Robertson concludes, “The goal of these elaborate efforts appears to have been to create a misleading impression to the international transplantation community about the successes of China’s voluntary organ donation reform and to neutralize the criticism of activists who allege that crimes against humanity have been committed in the acquisition of organs for transplant.” This is something to keep an eye on, eyes that have not been harvested from prisoners. 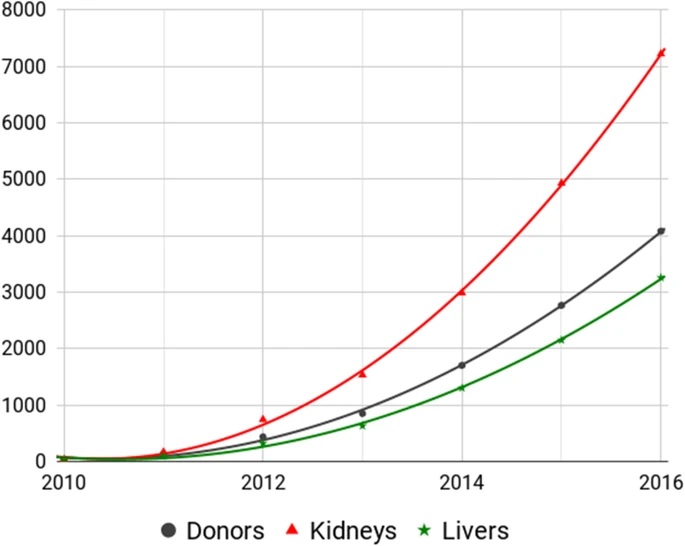 It’s been a while since we’ve written about peak oil—not the idea we are running out of it but instead that we are close to maxing out our use of it. Two years ago it seemed that the U.S. was near peak oil usage with American oil consumption essentially flat for three years, but alas the last two years have seen U.S. oil usage increase. Even when the U.S. was providing hope, world oil usage continued to increase each year. But via Kevin Drum we read that one of the world’s main oil producers, Saudi Arabia’s Saudi Aramco, believes peak oil demand will occur in 2035. That’s still 13 years from now which is too long a time period to address climate change concerns, but still remarkably soon. It may be statistical noise but the rate of world oil usage increase has been deceasing since 2014. In two weeks we’ll discuss how clean energy already appears to be warding off the worst estimates of climate change—the world is not going as badly as you think, unless you’re a San Antonio Spurs fan like us. 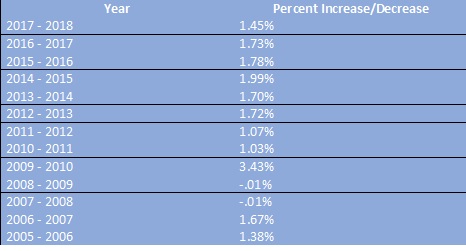 We work with colleges often nowadays so have a bias to the importance of education. So does the World Bank, which last year launched a Human Capital Project to measure education “not by years in school or degrees earned, but by actual learning outcomes” based on harmonizing test scores from countries all over the world. They recently released the latest data which analyzing is a learning experience in itself. The country with the highest score, that is the country with the students with the highest levels of learning outcomes, is Singapore, followed by Japan, South Korea, Hong Kong and Finland. Our American readers will note they don’t see the United States in the top 20 list below—that’s because it is ranked 22nd. That’s not the top percentile but it is higher than the UK, Spain, Italy, France and China. Vietnam, also not in the top twenty, still scores high for a developing country at 27th. Peruse the full list and increase your learning outcomes. 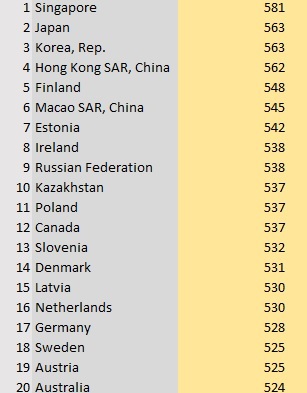